The ships and their crews were put through several integrated training events, say the US Navy in a release.

“We did a liaison officer exchange, where their CAG-Ops and admiral spent time aboard the John C. Stennis, and our admiral went to the Charles De Gaulle,” said Bowens.

“We also exchanged landing signal officers from both aircraft carriers to cross-train. Both carriers have similar aircraft landing equipment.”

Conducting joint operations and exercises in the region with allied NATO partners is beneficial to everyone involved say the US Navy.

“[This] PASSEX enhances partnerships with our NATO allies, and promotes interoperability,” said Bowens.

“We can better understand how each other operates. [The John C. Stennis Carrier Strike Group’s] mission often includes presence operations, and when we work in combined airspace, we show strength through resolve. We’re not just two aircraft carriers passing by each other at sea, we’re working together.”

A similar viewpoint was shared by French leadership.

“That kind of interaction is the best way to increase our interoperability with our American ally.”

The John C. Stennis also provided targets for French Rafales to strafe at during the nighttime GUNEX.

That photo looks very like a Merlin helo, I thought at first it was an NH 90 but it isn’t. Presumably it is Danish? Nice to know our Allies are flying Westland’s best!

I believe the Danish operate Merlins but not sure If the Niels Juel carries them.

We do, and it does, although it is actually our MH60 Sea Hawks that are intended for naval service.

Thank you, I did not know that.

We do, and Niels Juel-class frigates can embark Merlins which is however not the normal case. MH60R Seahawks are intended for shipborne operations.

Shame we can’t get more orders for them, the polish seem to be buying the merlin, I hope is more than two…

Cam. I believe the Polish order is intended to be for four aircraft, presumably either the same or very similar to the UK HM 2.

I don’t know where they are but there’s a few ships missing from the USN group. The size varies but usually there’s two permanently attached Arleigh Burke DDGs, a Ticonderoga class cruiser, asw frigate, replenishment ship and an ssn.

And the french strike group, normally replenishment ships and frigate. But is a carrier strike group smaller than carrier battle group?

Yes it is Cam. A CSG has about 4-5 fewer escorts than a full out Cold War era CBG. However, the USN is trending back towards larger deployments of vessels with a carrier. The Lincoln CSG is currently training to deploy with 2 cruisers and a full DESRON.

Is that NINE destroyers and frigates?

They’ll likely be around, just out of sight for the photo; too many ships to fit in if both carriers and all their escorts crammed in close together.

What’s a likely escort fleet for the QE? 2 destroyers, 2 frigates and a sub plus SSN?

Been doing some analysis on this recently. You can go for minumum but generally you have to have some kind of attritional contingency. One of these is the intersting requirement for a GP frigate (cheaper AAW ship) to cover the rear.

Minimum is therefore 1 T45, 2 T26 (ASW) and something else that can do pop-up missile defence. If the latter is a T45 we have principle AAW redundancy, if not we’d have to bug out as soon as we lose the “up threat” T45.

I THINK AN RFA AT THE BACK,WITH A 26 SITTING IN FRONT OF IT, JUST BEHIND THE PRINCIPLE VESSEL CARRIER OR ALBION A T45 IN FRONT, OF THE CARRIER AND TWO T23 ON THE WINGS AND AN ASTUTE OUT IN FRONT WITH MERLIN ASW IN ANY GAPS AND A FEW F 37B ON AIR PATROL COVER.

I THINK WE NEED ANOTHER TWO OR THREE DESTROYERS.

And the French carrier has a Dutch ship as escort as well so the idea that we would not have that same sort of extra escort is quite likely. And how easy would it be for the French to scrape up all their necessary escorts?

Many times the strike group escorts are off conducting independent operations from the group but remaining within the umbrella of the CSG’s air coverage. Increasingly you will be seeing large deck amphibs also acting in the CSG role albeit with smaller capabilities.

THEY’RE HIDING FROM A SWEDISH GOTLAND SUBMARINE THAT KEEPS GETTING PAST THEIR SHIPS AND EMBARRASSING THEM.

two carriers that HAVE GOT THEIR AIR WINGS EMBARKED. AND NOT WAITING FOR EVENTUAL DELIVERY

Is THERE A CAPS LOCK ISSUE TONIGHT ?

Several downvotes above for no actual Reason whatsoever.
Think I’ll make it my mission now to just high light this pointless feature on here. !!!!!

Wednesday Evening must be children’s night !!!

Why is the aft of the two Arabel Radar domes missing on the CDG?

Probably been Down Voted !!!!!

Anyone know where Hero, TH, Ulya, Iqbal and a few other posters are tonight ?

I had a nice chat with Ulya yesterday Cap. Herodotus has not been on for some time. TH surfaced once and was flagged and removed.

What has happened to Rear Gunner Richards, I miss him!

Keith, You have obviously upset one of a few !

Personally, I think He’s still here, Under another name.

Not going to say what It Is though.

If RGR is still reading, hi!

Are you talking about the captains and Richard cage match??

I must have missed that, what are you saying???

I don’t keep up religiously with this, I pop in and out every now and again! But what happened last week??? I saw RGR and (I think) the captain having a lot of arguements, or am I wrong?

Wrong. RGR and the Captain are thoroughly disliked by another poster. Clashes often occur, and sometimes I would be dragged into it. One due to my political beliefs being similar to theirs, and two by association as I enjoy chatting and laughing with them both, as well as my usual serious posts on UK military ORBATS, bases, units, and stuff. Well after yet another spat things were said, and RGR was banished. I won’t say what was said out of respect for George. As I said at the time I had no problem RGR, I found him hilarious and he… Read more »

Damn, how did I miss all of that!
I guess it was already deleted by the time I was one, bit that’s sad, I always like RGR as well! If your out there RGR, hi!
I have a feeling I know who the other poster is!

I just got the names a bit mixed up there.

Well, I’ll bow to your better Judgement on that Daniele but with Reservations.

Been There, Seen It, got the Tee Shirt.

One of the Site’s I’m on had a real problem with haters, It got a bit messy as the majority were Ex Service People. Mostly Ex FI. Vets.

The upshot was, We had a cull.

Who knows? She has not disrespected me in any way and I treat posters likewise. You think she is not what she says? I have no reason to doubt her myself.

Naive of me? Maybe.

Yeah, I like ulya, I’ve had a couple of nice conversations with her, she seems to be a nice person, id say she is russian. She’s not here to pick fights, I think she’s just here to get different opinions, she’s very respectful and there doesn’t seem to be any I’ll feelings, as there should be really!

That is pretty much how I see it too mate.

Just thought I’d say hi. I’ve been a bit busy so not commenting too much.

Nice photo, but QE looked far better alongside the US carrier when they had their photo op. But I am bias of course!

Evening Lusty, our navy expert. 🙂 Agreed.
Soon it will be our turn.

I can’t wait to see QE or POW will a full battlegroup. Chuck in an Albion, Bay or Argus and I’d be even happier. Of course the real prize will be QE and POW together…maybe later this year?

For a photo op certainly.

But on ops I guess only in wartime where the s**t really has hit the fan. 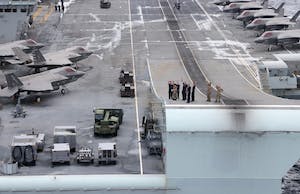 November 11, 2021
This week the panel discuss the assassination attempt on Iraq's Prime Minister, Ukraine's tensions with Russia and Carrier Strike Group 21's arrival in Oman among other things.