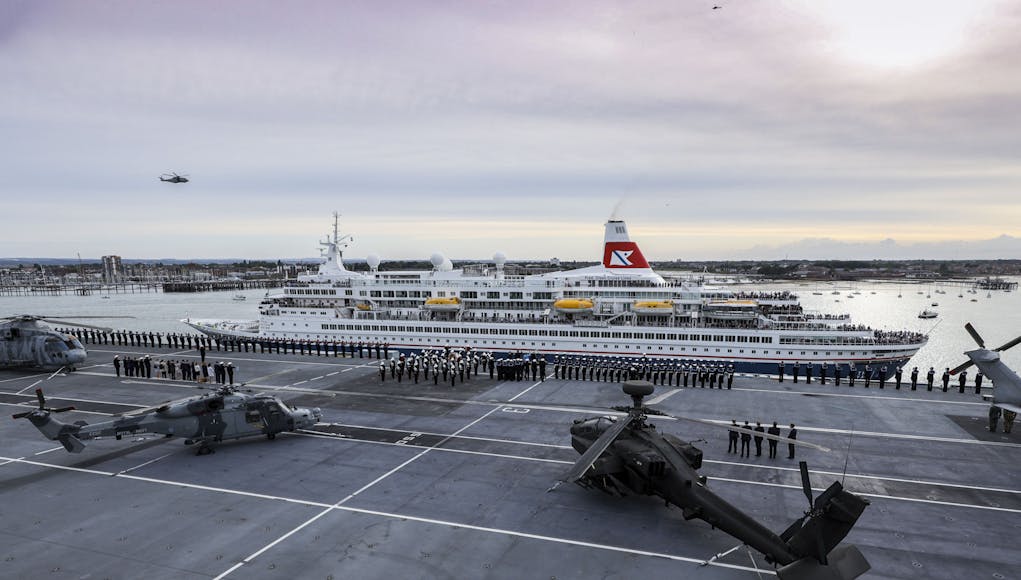 The Prime Minister Theresa May, Penny Mordaunt Secretary of State for Defence and the First Sealord Sir Philip Jones were present as the Veterans left.

Seen here with the crew of HMS Queen Elizabeth for the D-Day 75 Celebrations as part of tribute to Normandy veterans in the presence of world leaders, the general public and the Armed Forces. 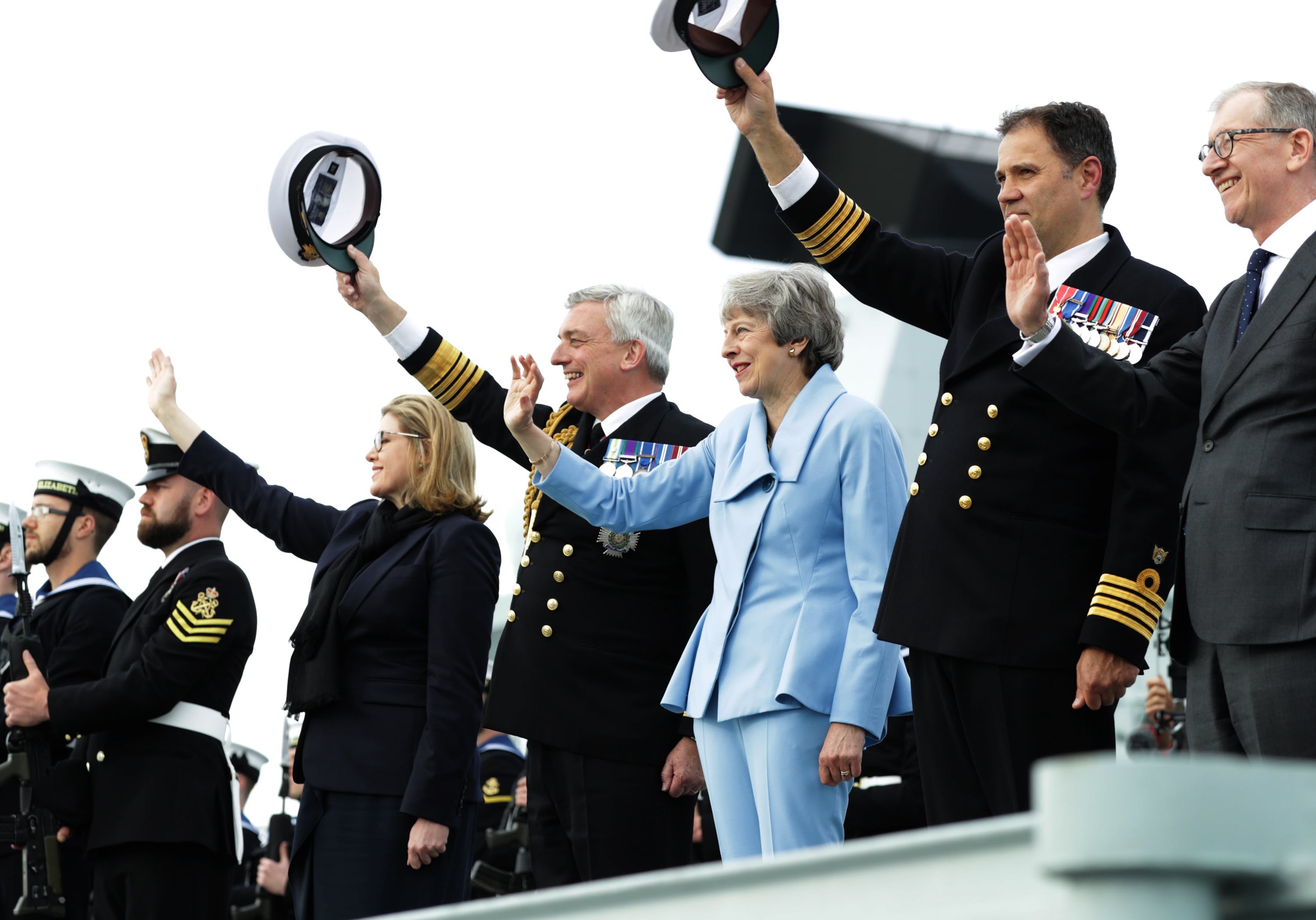 At an international event on Southsea Common, an audience of veterans, military, senior figures and local residents watched an hour-long performance telling the story of D-Day and the meticulous planning by allied forces that paved the way for the invasion of Normandy.

The event featured testimony from veterans, theatrical performances and live music culminating in a flypast of 24 aircraft including the Red Arrows and the iconic Spitfire.

Veterans then enjoyed a reception where they met world leaders in person before the majority were moved to The Royal British Legion’s specially-commissioned ship, the MV Boudicca. The general public will then be treated to a display by the Red Arrows.

Over in France, troops have already begun to arrive with 150 troops from 16 Air Assault Brigade jumping from RAF Hercules aircraft. Amongst those jumping with Red Devils parachute display team were 94-year-old Jock Hutton and 95-year-old Harry Read.

In the early evening the MV Boudicca sailed flanked by Royal Navy ships. Along the ships in port saluting the veterans as they go past will be HMS Queen Elizabeth, the biggest ship in the history of the Royal Navy. Onboard to bid wave the veterans off will be the Prime Minister, the Defence Secretary and the First Sea Lord.

As the ship made its way out of the harbour the people of Portsmouth paid their respects as a lone Spitfire passes overhead and nine Royal Navy ships from frigates to small patrol craft will line her route into the Channel in gratitude for their voyage 75 years before.

Fantastic. And as always highly moving. I read that many have no idea what D Day even is? I find that shocking. It should be taught in all schools and perhaps a national holiday of remembrance every year. For me, the Battle of Britain and D Day are the two that mean the most, as my Grandfather was one of the engineers involved in building the Mulberry Harbour who’s remains are at Arromanches. Not seen so many RN ships in one photo for years, and even then there are so few. Would have been a better spectacle if they had… Read more »

I agree. I think D-Day is possibly the most important single event in modern history. Although I would take the news that many have no idea what D-day is with a pinch of salt. I am not sure exactly what question was asked and who they asked. If they asked the sort of people that end up being interviewed on local news then I am amazed they were able to understand the question let alone know the answer… My children know what D-day is and the youngest is 5! But yes it should be taught in schools by default and… Read more »

Having taught some of the Great Unwashed , I do not doubt the report of widespread ignorance.

I agree, but also think the code breaking at Bletchley Park should be included as well.

What are the two ships behind the type 23 frigate? Can’t make them out?

I think the one behind the T23 is a Halifax Class frigate from Canada.

The one is definitely as you describe Rob. There was a lovely photo of her yesterday flying the Jack from the Jack staff(!) and a big RCN “Battle Ensign” from the main mast. For many years the Canadians swopped the Ensign and Jack in a complete break from the Commonwealth tradition but in recent years reversed back to their “proper” spots ! 🙂
The last of the three is definitely not RN. Daniele-Would have been nice if HMS QE had been able to accompany them across the Channel!
Cheers

QE and all the rest Geoff.

There’s a graphic I saw somewhere on the ship line up. I recall Fort Victoria, the RCN vessel following as Rob says, 6 Archers, a Hunt, a Sandown, Enterprise, Tyne, aT45, and a couple of 23s.

Given how busy the senior service is with our vessels deployed worldwide I guess the RN was well represented, despite my earlier disappointment that there is no fleet review.

In the foreground we can see HM ships Explorer, Pursuer, Puncher and Biter, followed by MV Boudicca. Following that, we can see a Type 23 (HMS St Albans), followed by HMCS St John’s and HNLMS Snellius.

In the background, we can see RFA Fort Victoria, HMS Defender, HMS Northumberland, HMS Cattistock, HMS Middleton, and what looks to be HMS Magpie.

Thanks Lusty and Daniele. Certainly enough ships for a mini Review with HMS QE at the head. Would have been nice to have seen them lined up as in days of yore but limited time and lots of commitments so there you have it!

I wish my granddad was still around to see this, I’m sure he would have loved the celebrations, albeit that it would have brought back some awful memories too. He talked very little about his service but once he tried to describe what it was like sailing over with the D-Day armada. “amazing and terrifying” are the words that stick with me. He couldn’t believe how many ships there were nor forget the 100s of planes flying overhead. They were immensely proud of what they were about to do, but also very aware of what awaited the landing forces.

And we are proud of him Rob. Respect.

At least now and again I get to walk round his old stomping ground – its berthed on the Thames near London Bridge. He didn’t even tell me that, just that he was on a cruiser. I found out years later when my mum casually told me as we walked round her deck!

She was on the gunline on the 6rh I think?

I was always under the impression that during a present arms senior staff salute?

I think Europe forgets the sacrifice Britain made for them! And Britain even wrote off Germany’s debt to Britain after ww2! But we British kept paying our debts to USA untill just recently! Germany owes us many billions…

Was getting to the end of the thread thinking how refreshing it was to hear people just paying respect and talking about memories and no vague Brexit hints and people going on about how Europe owes us or something.

Have a day off man and just pay some respect.

Fat chance! Europhobia is a way of life for some!

I don’t think it is that in the majority of cases at all concerning Brexit, I really don’t. We, the UK, are part of Europe, I am a European. That will not change if the UK is within the EU, which a different entity from “Europe” or not. How can one have a phobia of oneself?! Maybe one can! I think Cam’s comment and other “anti Europe” comments in general come from an irritation of the EU’s behaviour in the whole Brexit Saga, rather than a “phobia” of Europe. And there are many on the Continent who also want to… Read more »

Gosh, I know things are pretty quiet on UKDJ at the moment, but that is a pretty nit picking post even for you!

Nothing nit picking about it.

Sorry but with 4 posters all picking up on Cam’s comment I thought I’d stand up and suggest an alternative.

Oh grow up.… what’s the matter, missing your Wetherspoon friends? Nice pair they were. I do notice that when Sole takes your prejudices to task, you are quick to genuflect and return to your obsequious, and rather creepy, Uriah Heap self!

If Britain “wrote it off” chap then by very definition they don’t actually owe us anything.

“I think Europe forgets the sacrifice Britain made for them!” – an absurd idea. Our European partners are very aware of and put significant effort into marking the efforts made by the Allies in Liberating Europe. “And Britain even wrote off Germany’s debt to Britain after ww2!” – Any reparations owed were written off in 1990 after reunification of Germany to allow it to exercise full sovereignty over itself and to move on. It is a settled matter. ” But we British kept paying our debts to USA untill just recently!” – Indeed the UK did but for a very… Read more »

See your comment above about “Nit picking” for a perfect example.

All too easy to dismiss ones opinion isn’t it.

My Grandfather was a CPO on board HMS Devonshire around D Day but he never spoke of where or what the ship was doing during D Day. He rarely spoke of the war at all, to be honest. Him or his brother who served on HMS Tactician.

The only thing he ever spoke of was his intense dislike of Americans. We never knew why though, he never even told my Nan.

“Oversexed, Overpaid, and Over here”? 😀

I can imagine that many British servicemen were pissed off about that….a really hard one to reconcile!!!