Footage from the first ever firings of a Brimstone 2 missile from an Apache AH-64E.

Fired from a M299 launcher, and using a telemetry missile with no warhead, this proves Brimstone can be integrated on to an Apache. The highly regarded Brimstone precision is clearly seen.

A Boeing flight test engineer who witnessed the trials said:

“The mmW autonomous shot from a moving and banking platform against an off-axis target with the missile hitting the tank’s turret ring was the most aggressive shot I have ever seen in my 30 years of the Apache programme.”

A spokesperson for the MoD said at the time:

“During June, MBDA is being funded by MoD to carry out risk reduction/proof of concept firings of Brimstone off an AH64E using the Modernized Target Acquisition Designation Sight and fire-control radar. These firings support MBDA’s proposed missile solution for the UK buy of AH64E — Future Attack Helicopter Weapon (FAHW) — an enhanced Brimstone specifically designed to meet the British Army’s attack helicopter needs.”

Brimstone 2 will have an improved seeker, a more modular design and improvements to airframe and software for “an overall increase in performance with improvements in range and engagement footprint” including a “more than 200% increase” in maximum range. 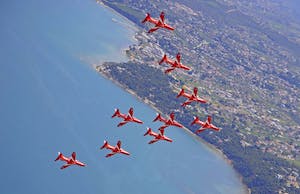 April 30, 2021
The Red Arrows have deployed to Greece to carry out essential pre-season training.