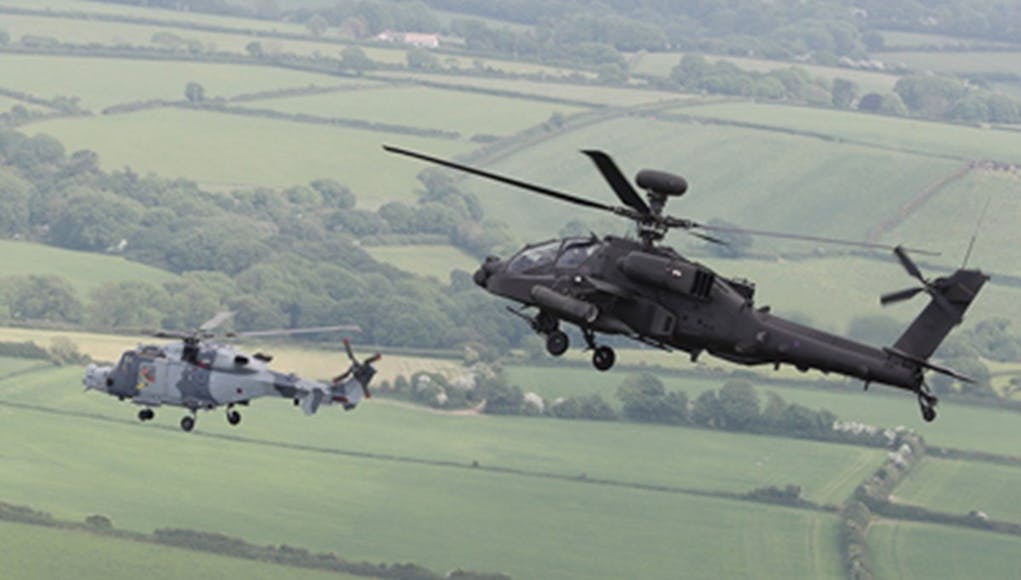 According to a press release, British Army Wildcat helicopters have successfully used a powerful coded laser to designate a target for two Hellfire missiles launched from an Apache attack helicopter at a military range in West Wales.

“The Wildcat Helicopter Sqn, based at Royal Naval Air Station Yeovilton, Somerset, is part of a specialist Aviation Reconnaissance Force. This unit is specially trained to find targets deep in enemy territory, which allows them to coordinate attacks using a wide variety of weapons, including Attack Helicopters, Artillery and Fixed Wing close air support.

Two Hellfire missiles were launched from separate Apache attack helicopters from 4 Regiment Army Air Corps, based in Wattisham, Suffolk. The guided missiles followed the Wildcat laser to a target mounted on a barge around 6 miles out to sea.  Both missiles hit their designated targets, demonstrating the substantial capability and the effects of using Wildcat and Apache helicopters in tandem.”

The Wildcat helicopters also demonstrated their significant range say the British Army, flying the 350 nautical mile round trip from Somerset to Aberporth, Wales, the only place in the UK cleared to launch the Hellfire missiles.

The exercise is the latest demonstration of what the Wildcat can bring to UK Defence and is part of the newly establish Attack Reconnaissance Team (ART), allowing Wildcat and Apache helicopters to work closely together to simultaneously find, track and strike the enemy.

The British Army say that this new concept brings together the unique skillsets of the reconnaissance helicopter pilots, trained to seek out enemy locations, with the powerful effect of the Apache attack helicopter.

34 Wildcat for the British Army.

An original 67 Apache and 34 Wildcat replace 200+ Lynx and Gazelle.

You could say some of Gazelle’s work is replicated by Watchkeeper, and look how well that is going.

As for the capability, all well and good.

But why can the Apache not designate its own targets?

They can designate their own targets. The issue is even the US Army much less the British Army have enough Apache airframes flying around to scout every area. Hence the need for a cheaper helicopter in the scout role like the MH/OH, Kiowa and the newer Lakota series of helicopters in the US. However there has been more of a switch in the US to using the E model Apache to control nearby drones for scouting.

Considering how useful the helicopter is, I’m always surprised by the small fleets operated by the UK armed forces. With the demise of the Gazelle, surely the forces need a low-cost support helicopter, in order to allow the frontline machines to be spared from the ware and tare of low operational duties?

That would be the Merlin Maurice.

It is a bargain at £20m, which interestingly enough is the price we can get the latest apache for.

So general utility a large volume of marlins and for the recon and attack role apache.
The more expensive Wildcat to the RN and special forces.

Great combination.
Fingers crossed we can afford more of them!
https://www.theguardian.com/politics/2018/jul/02/us-defence-secretary-james-mattis-uk-military-spending

Why not integrate Hellfire/Brimstone on to the Wildcat?
Surely having proven the designation side, the carriage and launching would be a force multiplier considering the paucity of assets nowadays!

I’d like to see APKWS on both Apache and Wildcat, also protector for that matter, cheap and effective. Don’t get me wrong Brimstone is world leading but I believe APKWS is 25% of the cost. APKWS is not a capable but there must have a fair few times when it would have done the same job against a Toyota hi-lux. APKWS II will have more capability

I totally agree, Brimestone, Hellfire and 500lb LGB are total overkill for most counter insurgancy mission we are invloved with. The APKWS should be acquired by us and fitted to both Reaper and the future Protector (Sky Guardian). After all its just a kit that modifies an unguided rocket so win win in my book.

Glass Half Full
Reply to  Expat

Wouldn’t Martlet Lightweight Multirole Missile make more sense as its already intended for RN versions of Wildcat and seems to be similar in capabilities to APKWS although perhaps I am overlooking something? There’s even the potential for a low cost glide bomb variant for drone use where 3x will fit on a single Hellfire missile rail. The Sea/Land Ceptor commonality suggests we should also be seeking this with other missiles across land, naval and air systems to get numbers up, costs down, and common inventory. It would have to get qualified on Apache but then that would seem to benefit… Read more »

Wouldn’t it make more sense to have the laser equipment on the apache aircraft? only using one asset instead of two?

Always negative reactions to every post. I think this is excellent news! We should celebrate. Tactics for recce helos is different from attack helos. Recce seeks out. Attack set up trap using terrain. A recce helo can sometimes be better placed to designate in a surgical strike while the bigger attack helicopter is out of the way unsighted. This gives you greater flexibility and an added capability. It doesn’t stop you using the awesome many-on-many Longbow capability the Apache has when you need it. Agree with the comment above on APKWS, however. Totally makes sense.

as an anti submarine buff, i think more effort should be put into location and attacking capabilities. its been very quiet in that area for sometime, but we never hear of anything.

Also agree with the APKWS as an additional asset in our kitbag, the savings on using these against suitable JSIS targets, instead of Brimstone/ Hellfire an paveway would mean the purchase would effectively pay for itself inside a couple of years.

would installing the data link help with these types of roles?

If both helicopters are in range of seeing a laser pointer, it seems the one without weapons is redundant, but i might be missing something.

Steve, tactically it doesn’t always work that way. There might be good reasons why you deploy your recce helo first, full of fuel, no other payload, maximising its range, time on station and revisiting capability. Only when you know what the bad guys are doing and where the situation is most urgent, do you call in your attack helo, laden with weapons, not much fuel, on an in/out killing mission. And yes, data link would be a major boost. Believe Apache already has it. Don’t think Wildcat does. But it would not just be Wildcat/Apache working together. You’d also be… Read more »

From what I read Wildcat was intended to have Link 16 until the plan was chopped in 2008. Aparently the export version does have Link-16 compatible TDL.