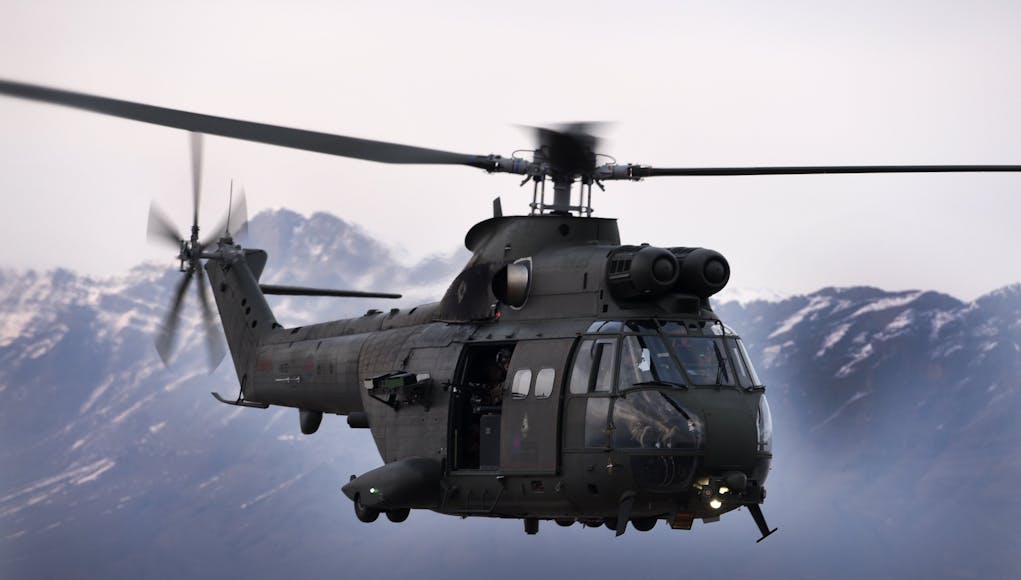 A £100 million deal to provide support to Puma HC Mk2 helicopters through to March 2022 has been agreed.

The support arrangement will ensure the maintenance of the aircraft as it provides support to ground troops on the battlefield and to civil and emergency services responding to disasters and emergencies say the MoD.

The deal will sustain around 25 jobs at Airbus Helicopters UK Ltd in Oxfordshire at the company’s base in Kidlington and at RAF Benson, where the front line squadrons are based and many more across the supply chain.

“This £100 million investment will ensure our Puma helicopters continue to transport British troops and kit to the front line – helping us provide vital support quickly in rapidly evolving situations. The deal – part of our £178 billion Equipment Plan – will not only give our Armed Forces the kit they need to deal with intensifying global threats, but will also sustain British jobs at Airbus Helicopters.”

The contract, which is intended to eventually provide support until the Puma HC Mk2 out of service date, currently planned for March 2025, will provide technical services to support safety management and fault investigation and materiel support including repair and overhaul of major components. It will also provide a training service for RAF maintenance engineers say the MoD.

“The Puma HC Mk2 was the first helicopter deployed to the Caribbean from the UK to provide emergency humanitarian relief to the islands left devastated by Hurricane Irma back in September 2017.

Deploying rapidly, the aircraft provided relief to people who saw their homes destroyed and helped deliver supplies and aid as part of the wider UK emergency response within 72 hours of receiving the call. Separately, the Puma HC Mk2 has been deployed to Afghanistan since 2015 as part of the UK’s contribution to the NATO Afghanistan Mission named Operation RESOLUTE SUPPORT.”

“The Puma HC Mk2 is carrying out a vital role in troop transport, load movement and humanitarian operations around the world. The upgraded helicopters represent a significant increase in capability over the Mk1.

This support arrangement, which embraces learning from the early days of operating the Mk2 aircraft, will ensure that cost-effective support is always available to allow the user to deliver the capability wherever and whenever it is needed.”

As 2022 is only 7 years away ,the real question we should be asking is what will replace the Puma.
I’d like to see the NH90 (That is once all its bugs have been ironed out). Mind you I did like this snippet:
” but will also sustain British jobs at Airbus Helicopters.”
What like sending the RAFs PUMA fleet to Romania in 2008 to be upgraded..

I suspect a further chinook order to replace the Puma fleet and life-expired Chinooks. with reduce numbers of course

Couple of things for me here: 1. These should be transferred to a dedicated Foreign Aid Service and their replacements paid for out of said budget. Replacements should be Merlin or V22 Ospreys. 2. A bit of a bug bear of mine but this should not be part of the equipment budget – it should be part of the maintenance and support or operational support budget. Whilst it is in support of equipment in reality it is keeping it going and is therefore an operational cost – not a capital expenditure cost. This is important as most people would rightly… Read more »

It’s my understanding that the puma is used in non combat roles. Therefore replacing them with new helicopters wouldn’t make scenes. How many second hand black hawks could £100 million get. That’s if we ever do get a replacement.

I thought the consensus was that a smaller Puma fleet (best airframes) would be further extended to circa 2035 when the earlier Merlins are slated for retirement. Therefore allowing all medium helicopters to be replaced with one type across all services.

Personally I don’t see the money for a new medium helicopter fleet being available in 2025. (only 7 years away)

Let’s be honest calling a Merlin a medium lift helicopter was always a stretch carrying 5 tons /24-30 ish passages it sits in a less than compfy place between heavy (10 ton load/ 30-50 passengers) and a two engine medium ( couple of tons/ 10-20 passengers). But if that’s what you want it’s difficult to find a replacement for both puma ( a classic twin engined medium lift) and the almost heavy lift Merlin. The truth is the navy needs something like Merlin the army something like puma. So best to accept and find them both what they need. We… Read more »

Totally agree Jonathan, their words not mine.
Guess if they can stretch till 2035 with the HC.2 it at least opens up many options.

Well I would replace the the Puma and eventually the troop transport Merlins (procurement should nicely dovetail) one after the other with an off the shelf Maritime enabled design with the lift and range of the Merlin being a benchmark.

Let’s face it guys, 15 years from now ” the Helicopter company, formally known as Westland” will have been asset stripped and what’s left of our once proud Helicopter industries Somerset base will be turned into a housing estate…

This being a given, I would suggest a suitable US type, bought in quantity and straight off the shelf.

Merlin is a class leading helicopter at an amazing price point (circa £20m). – The UK should standardise on it now or start the planning for its replacement. Realistically the UK probably needs only 5 types of helicopter: Apache (Attack /recon) Chinook (Heavy Lift) Merlin (Medium Utility) V22 (Multi Role) Wildcat (Light Naval) Over Time I see the Merlin and Wildcats being replaced by newer tiltrotars and in the case of Wildcat unmanned systems being operated from ships and would start this process with the T31’s. This should all be in plan now and we need a National manufacturing strategy… Read more »

Pacman27, the Puma is used for a number of roles that the Chinook, although being a better all round helicopter, cannot do. The main benefit of the Puma’s size is operating in confined areas such as villages/towns etc. The Chinook with its 70kt downdraft and 60ft rotor disc will not be able to land in most built up areas, hence the need for a smaller medium lift helicopter. The Lynx/Wildcat is a good aircraft for a small number of troops, but the Puma can fly in 12 to 14 at a stretch. The main disadvantage of the Puma, age not… Read more »

My understanding is that a Medium lift helicopter replacement for Puma is being looked at, but this may come to nothing.