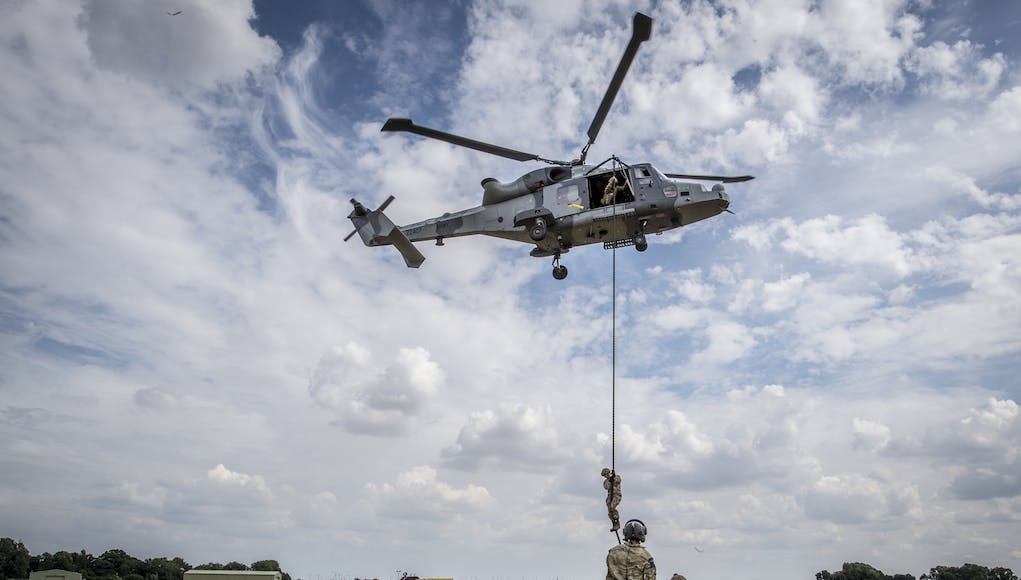 Soldiers from 16 Air Assault Brigade have been adding to their repertoire of airborne skills alongside Army aviators at RAF Brize Norton say the MoD.

The troops from the Patrols and Sniper Platoons of the 2nd and 3rd Battalions, The Parachute Regiment (2 & 3 PARA) – who specialise in forward reconnaissance and provide the eyes and ears of the battlegroup – have been learning to fast-rope from the Wildcat, the latest hi-tech addition to the Army’s helicopter fleet.

“Because of rural or urban terrain being complex and dense in some areas, you couldn’t land a helicopter and you couldn’t get in by any of the normal means or on foot. So to insert a small reconnaissance group in by helicopter through fast-rope or abseil allows commanders back with the rest of the battlegroup to get more situational understanding of the ground.

Jumping from an aircraft is high-risk, but it offers a lot of utility and it takes a lot of courage to do. It’s the nature of a paratrooper that he’s prepared to jump out of a plane, or to fast-rope or abseil. It’s an innate confidence that comes from the high quality of men we select.”

“It’s progressive, like anything in the Army. You start off quite slow and steady, and then it’s a big push out of the door and then you’re straight into it. It’s good training, plenty of adrenaline. You always get a few shaky ones, but everybody performed, everybody got out of the door, and everybody did their job, so that’s the important thing.

Even though there’s a danger element to it, without knowing it you’ve got the training within you, so you perform and you do exactly what you’re supposed to do, and that’s the end-product of this kind of training.”

Matlots….
Been there…done that.
Part of the boarding team repertoire.
The training is OK when you start off with just your combats on but then you add a rifle, pistol, baton, body armor, search kit, radio etc to the mix then you invariably end up going down the rope way to fast and landing like a sack of spuds at the bottom.

Good fun though…it beats climbing 40m up a rope ladder to get on a tanker anchored in the NAG.

Thank you for your service ?

Huffing big tankers waiting to get filled at the OPLATs

And car transporters. Full of right hand drive cars from the far east that get converted in Iraq to LH drive…
Container Ships…Container searching involved abseiling down the front of container stacks, tying off and then opening them for searching.

Interesting – to think these same Wildcats were on the potential chopping block just a few months ago to save Albion/Bulwark! Crazy……

Any updates on the forthcoming Modernising Defence with Mr Williamson? Isn’t it past due??

I read that it is unlikely to be finalised until they know if a financial package will be on the cards at the next budget in the Autumn. If there’s not I expect ruthless cuts to prove a point…. I reckon some major capabilities will be cut that really raises our allies eyebrows and piles the pressure onto the Government