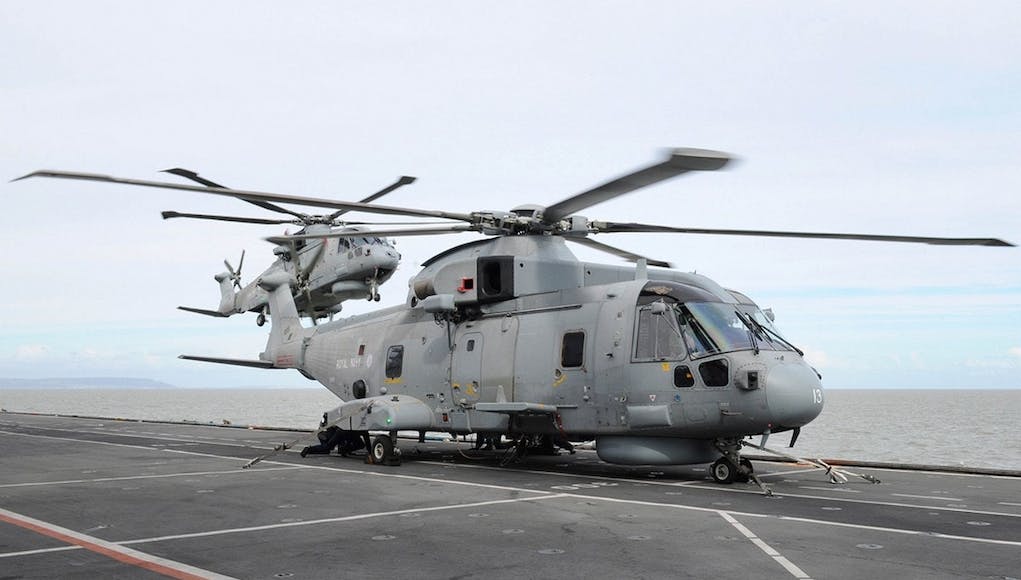 The Royal Navy has taken delivery of the 30th upgraded Merlin Mk2 helicopter from industry.

Lockheed Martin UK joined representatives from the Royal Navy and the Ministry of Defence for a ceremony to mark the handover of the final airframe at Leonardo’s facility in Yeovil, Somerset.

For the last ten years, employees from both Lockheed Martin and Leonardo have been involved in the design, development and manufacture of the Merlin Mk2 as part of the Merlin Capability Sustainment Programme (MCSP). Under the £750m contract, thirty Mk1 helicopters were upgraded to enhance and extend their life with the Royal Navy.

The first helicopter was handed over in November 2012 and the event this week marks the significant milestone in the programme, which has seen all the airframes delivered on time and on budget. More than 1,000 jobs have been sustained throughout MCSP in Havant, Yeovil and Culdrose, where the helicopters are based.

“Merlin continues to be a world beating maritime helicopter that is an asset critical to UK defence and that will be an integral part of the future aircraft carrier capability. The success of this programme has been a result of excellent teamwork among industry and our government partners that has enabled us to consistently deliver on cost and schedule.”

The Merlin Mk2s have new radars, sonar systems, infra-red cameras as well as large flat, panel displays, giving pilot’s greater situational awareness. Since being in operation with the Royal Navy, the Merlin Mk2s have been pivotal in the rescue of migrants in the Mediterranean and on operations in Sierra Leone.

Any chance there’s some of these going to be based at HMS Gannet at Prestwick Airport?

No … But they deploy there regularly

Keep one based in gibraltar.

An ASM would’ve been a useful capability.

Is it too late? These are going to be in service for a while. Is any additional weapon integration planned?

Is there still the potential for the last 8 to be converted, even if at a later date? I don’t want to sound like an armchair admiral/air marshal, but even if all 30 HM.2s are fitted to accept the Searchwater platform the Fleet Air Arm could really do with the extra airframes. Far more with far less seems to be the current thinking strategy but everyone starts scratching their heads and arses when something happens

Current strategy!!!!! the Air Force has been suffering from that cockeyed mantra for decades

The Fleet Air Arm since its inception

LOL Ok I will give you that one 🙂

I meant the HM 2, but 190 101’s is not very impressive either for the huge investment. Another breathtaking sum of money has been spent on converting the RAF machines.

I wonder how many it would take to operate a 24/7 crowsnest coverage for the 2 carriers, which is not really needed in peace time but most defintely needed in wartime, where you do not know when and from where the attack will come.

Once you have that number deducted from the 30 and deduct probably 20-40% for maintance/upgrades (wikipedia states 5 of the 30 or 17%, but i suspect this is not allowing for bad timings of a war) , i wonder how many will be left for sub hunting.

Wikipedia has some interesting background. Re these 30, apparently 5 are in maintenance at any time leaving 25 of which 14 will be assigned to the carrier leaving … not many for other stuff. It’s not as bad as you might think though (at least for the RN) since the RAF’s Merlins were also transferred across to the RN in 2014 and 25 of those air frames will get HM2 enhancements (so effectively the same spec as the ones in this article I think, i.e. Mk2 maritime spec) with the first upgraded ex-RAF one beginning flight trials in September 2017.… Read more »

This is what i was trying to work out, if the 30 included the former RAF ones or not.

If it is 30 plus the 25 from the RAF, giving 55, this is a very different picture and sees more the sufficient considering the limited number of hulls that they can operate from.

I’m pretty sure it’s 30 + 25. The 30 that this article talks about are the updates of some of the RN’s original 44 MH1 order with these 30 upgraded under a £750m contract (a figure consistent between both the article above and the Wikipedia article). Then the Wikipedia article goes on to talk about “In 2012, the RAF’s Merlin HC3/3A fleet began to be transferred to the Royal Navy … A £454m Merlin Life Sustainment Programme will see 25 HC3/3A airframes fitted with the cockpit electronics of the HM2, folding tails and main rotor heads, strengthened landing gear, deck… Read more »

Why are we `rescuing` the migrants for `free` (i.e. MoD funds) when the traffickers are laughing at getting away with their profit and a blank conscience – the junk-boat journey starts well before the beaches and marine territorial limits ?