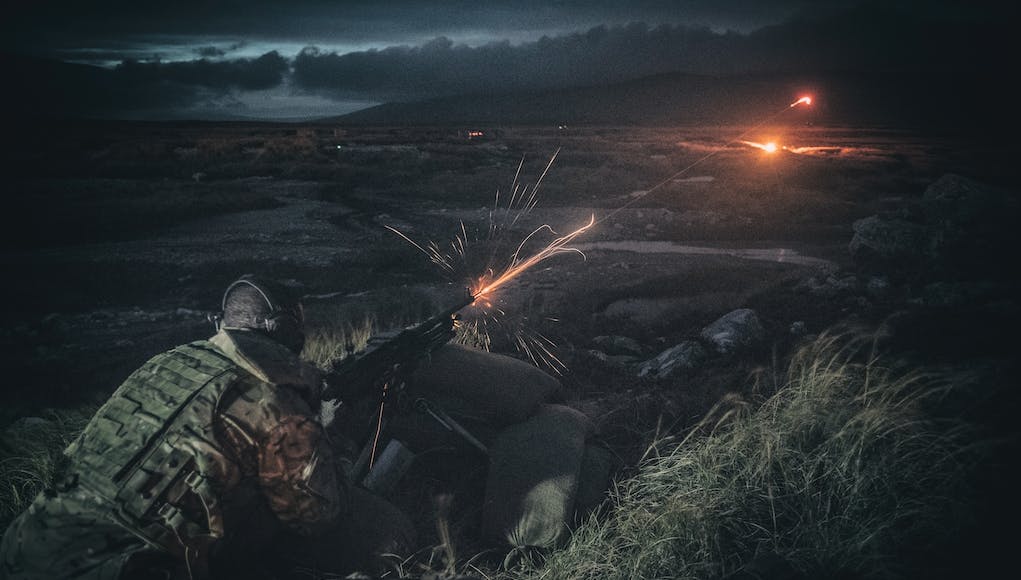 4 Scots conducted the training on Onion Range, images of this training are shown below.

The territorial waters of the Falklands extend to 200 nautical miles (370 km) from its coastal baselines, based on the United Nations Convention on the Law of the Sea; this border overlaps with the maritime boundary of Argentina.

The Royal Regiment of Scotland is described on thge British Army website:

“We are a large Scottish regiment bound by our unified purpose – to deliver a modern infantry fighting capability for the UK and its Defence requirements around the world. Each of our Regular battalions have specialist operational roles whether fighting on foot or mounted on the Army’s latest armoured vehicles. They work with our two Reserve battalions to ensure that the Regiment is balanced and adaptable, ready for all conflicts present and future.

The Regiment is a disciplined, resilient and professional team with an unrelenting focus on the pursuit of excellence. A team within which all people are valued and empowered to do their best. A team that has the humility to learn from each other and other people.”

The Falklands are a great training range for the British Army. Loads of space and welcoming locals.

This makes me wonder why we never invested more in tracked light infantry support. During the falklands conflict, it was decided not to send tanks or much in the way of tracked vehicles, because their weight and the boggy land of the islands were not suited for them.

You would have thought that it would have made military thinkers plan for lighter vehicles that has heavy firepower, along the lines of the boxer.

Failing that some more heavy motors, which most countries now appear to own.

I would think our BV206 and Viking vehicles are appropriate not Boxer.

Some CVRT were also used in 82.

On terrain like the Falklands, mobility is everything.BV’s worked well but it was helicopters that lifted the light guns and the ammunition (1982). You want control of the air so you can get your stuff about whilst the enemy has to attempt to move everything on the ground.

You would hope a situation like the Falklands doesn’t happen again and helicopters are available but if you realistically fought a war in 2018 (lessons weren’t meant from Vietnam and so who knows), there would be too many manpad sams around making it really difficult to move heavy gear by air.