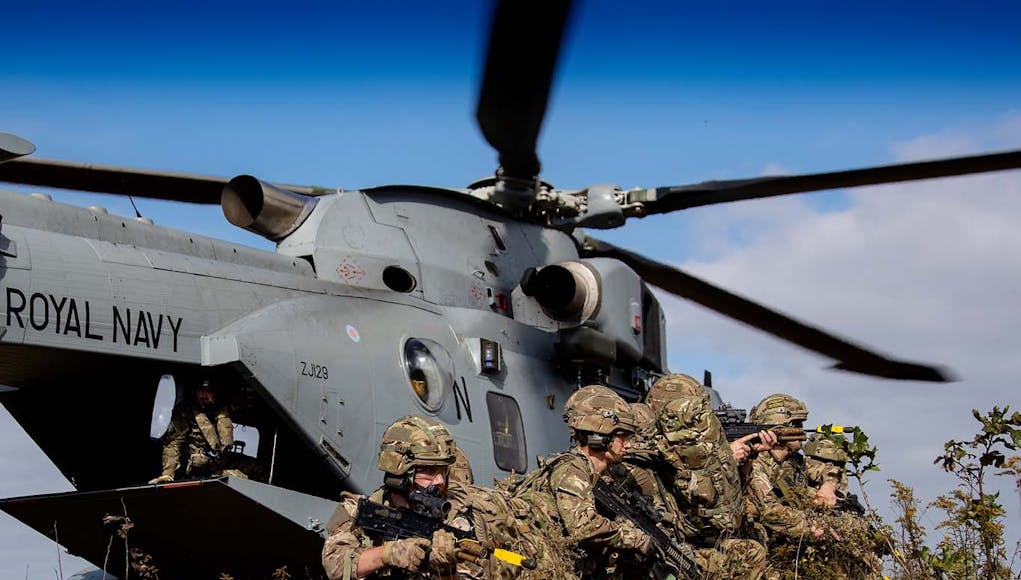 Lima Company, 42 Commando, ‘fought’ their way through the Virginia in an exercise designed to simulate rescuing downed aircrew.

“This is a great new role for the Royal Marines and it is really exciting to be involved in developing this new skill from the ground up,” said Corporal Richard Dowling in a news release.

The Royal Nvay say that the mission assigned to Lima troops extends beyond rescuing aircrew who’ve gone down deep in hostile territory. According to a release , it encompasses any mission to recover what are known as isolated personnel stranded in a ‘non-permissive environment’; this could include downed pilots, UK nationals or UK forces who have become separated from their Units.

“With the return of fast-jet operations, it’s possible an F-35 Lightning might come down on a mission over hostile soil and its pilot forced to bail out – a scenario played out on the big screen by Owen Wilson and Gene Hackman in Behind Enemy Lines.

In that Hollywood blockbuster, a specialist marines team waited on a US carrier for the green light to extract downed pilot Wilson from the war-torn former Yugoslavia.”

Lima decamped to Quantico, 30 miles outside Washington DC, one of the US Marine Corps’ largest bases, where they were joined by two Merlin Mk4 helicopters from 845 Naval Air Squadron, permanently assigned to the Royal Marines to carry them into battle. The US took part by providing Sea Hawk helicopters and allowing use of their ranges.

I recall 28 Squadron and the RAF Regiment dallied with it.

One of 42 Commandos new roles along with the MCT stuff, and other roles taken from Commachio.

I had the pleasure of bumping into a Pave hawk on my many travels, most impressed.

I wish they’d kept the Pave-Low’s flying. those were my favorite looking helicopter.

Is that all of Lima Coy, or is there more of them in the Merlin?

I’ve always thought of certain Royal marine commando units as Elite and special forces, they do support special forces and are commandos just like some world wide special forces. We should increase the Royal Marine numbers not cut them!. They are one of Britains best millitary assets and we are among the best at it. Britain is (or was until recently) the only European millitary with brigade size amphibious operation capability. We need to retain this capability and it made my year when I heard Hms Bulwark and Hms Albion will be saved, but 450 marines will be axed! I… Read more »

The RM as a corps are Brigade sized, but can no longer deploy in Brigade strength

This is a capability I never understood why we didn’t have. Seems odd it’s taken this long, considering the constant push into using jets to fight wars without risking ground force, with the inevitual risk that sooner or later one will be taken out or crash in a hostile area.

Except we are using scarce Merlins from CHF rather than a dedicated platform.

Do the Merlins have the defensive aids to go low level into enemy territory? Do they have AAR capability?

Not a patch on the US example.

The Merlin isn’t the best platform for ground units full stop. It wasn’t built around the idea it would take small arms damage and even with them being retrofitted with Kevlar during the recent Afgan war, i doubt they are really up to the role of front line deployment. I could be wrong and the kevlar upgrade might have solved the problem.

I assume any assault involving the Marines would likely be contested, and flying in with helicopters not designed for it is risky.

Chinook seems a better choice for this type of role, although it does lack firepower.

While the debate about “which helicopter is best” is long and boring I can say that the Merlin is currently THE best protected British transport helicopter. For example, its DAS is 2 generations better than than the Puma/Chinook, it has triple redundancy in all the flight controls, engines, hydraulics, generators etc where as Puma/Chinook are only dual and it has a proven AAR capability which, while it isn’t currently used, can be retrofitted in about 3 hrs. It has taken battle damage in Afghan and Iraq and still flown missions due to it’s numerous back-ups. Now we all know that… Read more »

Evening all This was originally to be a RAF Regt role, part of the JPR plan rolled out late in the last decade. Since 42 has been reduced in number (to allow RN to increase dark blue headcount without increasing overall liability) this role would always be one that they would have picked up – not by choice. 3 Cdo Bde can deploy a full Cdo Gp, roughly 1800 men and supporting equipment. Brigade is sized to accept within its ORBAT units that would allow, if required, a complete brigade to be deployed. Corps doesn’t suffer too greatly from the… Read more »

If they ‘fight” their way into the Shenandoah Valley, one of the most scenic areas of Virginia, some RM may just want to stay a bit.

CSAR is a capability we have lacked for two Long, good to see the RM in this role but Merlin is not the best platform no AAR capability is its biggest hinderance.

In an ideal world I would have loved to see a purchase of MV22 with part of the fleet used for AAR/COB and AWCS and the other part used for CSAR and special forces insertion.

Morning Martin Merlin isn’t the best platform for the role, as ever we improvise, adapt and overcome. If the trials (this is what these exercises really are) show some short comings then you may find the user requesting MoD to look at different aircraft types that could potentially better fulfill the role required. Pretty fortunate really that the MoD may have already taken this into account with the request to the US DoD for pricing and options for 16 new Chinook helicopters. As an optimist I am hopeful that for the first time in a generation the MoD are listening… Read more »

AAR is a bit of a red herring anyway. This is designed to be launched from a carrier and we have no carrier based AAR available. Yes it could also be launched from a ground based where it would be available but they need to plan around it not being until the carrier solution is found, if it ever is.

I wonder if this is part of the thinking behind the Chinook extended range potential purchase.

http://www.defense-aerospace.com/article-view/release/91366/aw-demos-hh_71-csar_x-in_flight-refueling.html The aircraft does have AAR capability but we have thus far chosen not to use it. A further isssue may be that with the failure of a400m we don’t have a tanker aircraft that can refuel a helicopter. Perhaps airbus will eventually over come the problem with the a400m, seems a shame though to have 90% of a very good CSAR capability and fail to go the extra 10% for little reason. With the closing of the gaps in MPA, carrier fixed wing aviation and now CSAR the UK is rapidly returning to a full spectrum military power. Numbers… Read more »