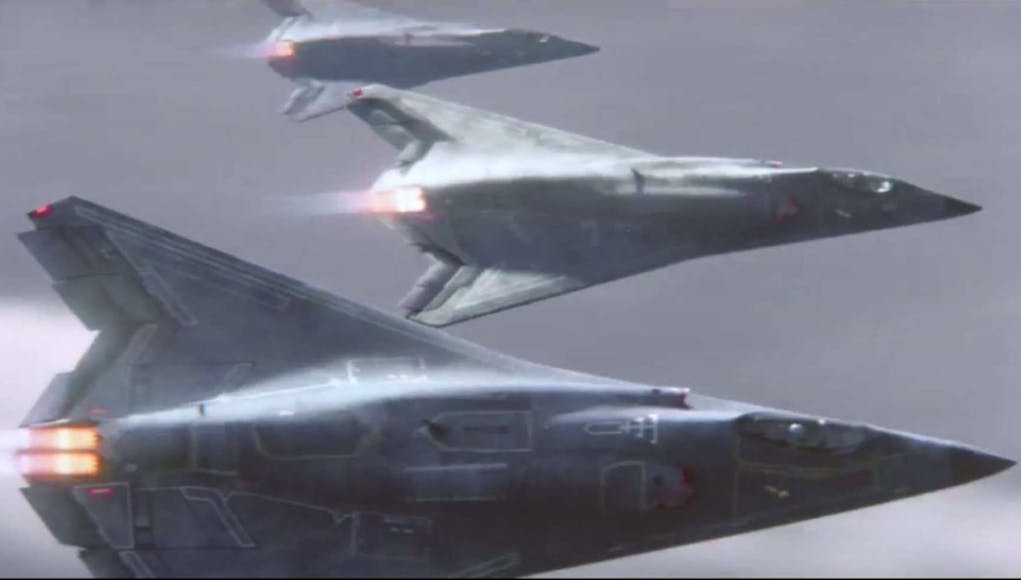 The defence giant is best known for its long line of flying wings, including the B-2 Spirit stealth bomber and the yet-to-be-unveiled Long Range Strike Bomber.

Northrop Grumman teased computer generated images of the new concept aircraft in a video shown below. The video shows a new mystery fighter flying alongside a few of Northrop’s already flying aircraft.

This sixth-generation fighter initiative is loosely known as the “F-X program” for the USAF and the “FA-XX” for the Navy.

A rather unconventional looking design.

The nozzles look 2D like F-22. No Yaw authority there

There might be a clue in what seems to be two exhaust jets being produced by what appears to be a single engine.

Split diffusers. Problem with thrust vectoring is that it can easily place the aircraft into a post-stall envelope, with a massive loss of energy. Best leave the super-manoeuvring to the missiles. Next gen aircraft very likely to have directed energy weapons as well.

Not even close to delivering a directed energy power plant with effective lethality at range on a fighter platform, bud. Not sixth gen. Prob not seventh, either. Unless some paradigmatic change in energy production is developed in the next twenty years.

I can make stuff up as well. Mind you my wont cost a trillion dollars lol. Still wish we would go back to designing and making our own.

Sadly that would be too expensive, we’re better off contributing to larger programmes.

its gonna be ridiculously expensive anyway.that`s the way how to make money.. and the numbers of jets will drop as usual 🙂

The numbers of f35 havnt droped.

true but costs have gone up and more and more debt added to the national debt.

The f35 is the most expensive white elephant in defence spending history…. Massive overspend – a decade late, serious software issues and will likely be outdated when/if it comes to frontline service. Not a great product.

I’m trying to think of the UK’s last independent military aircraft, never mind a fighter. It was a long time ago.

Or the Hawk? Nimrod?

A rouse, and a decoy if you ask me. Any “real” new tech will be top secret. Besides, imagine a carrier or landing dock ship with over a thousand UAVs onboard. They’d be much more suited for the modern day theatre in urban areas and mixed with civies.

I don’t think uavs are the future manned jets will have say , they should integrate both of them.

I respect your opinion, but the issue is “the human body” and G forces. The human body has limits to which modern fighters are exceeding. If taken out of the equation, a fighter could run circles around a manned fighter.
I believe it’s a matter of time…

A valid point Kent. However, it depends on the current perceived threat as to which direction war fighting technology goes.
At present there’s no competing technology umongst the perceived enemies to make the removal of the human politically necessary.
For the present, there’s a need to keep the human in the loop I think.
But, as you say time may change that. 😉

Nick…and without that “need”, the current service fleet should still dominate. The key piece of technology that has unleashed UAV technology has been Lithium Ion, driven by mobile phones and “increasingly smaller devices needing longer amp-hours”. That technology is still heavily invested in and being worked on…
If there is another breakthrough in cell technology, we’ll have drones everywhere and that’s the catalyst for UAV warfare.

Although that may be true Kent.. Even aircraft are limited greatly by g forces and would rip apart if they went above 12 G with todays air frames and most ‘drones’ are barely reach mach 1 at the moment.. Also with current technology and the fact the RAF have stated there is always a pilot in loop with a UAV, it would be difficult to dogfight or do much airiel combat compared to having a highly trained pilot on scene to look physically around with the mk1 eyeball. Sensors and cameras are not good enough in that kind of situation… Read more »

Can’t even get a reliable version of f35
Fucwits

F35 is not from northrop grumman.

Yes an thing that is correct
But I will refer you to the b2.. 2 billion dollars per plane and retired lol

That’s why they cost so much, you’re paying for the development

Dont you jyst love ill informed rubbish…. and yet its not hard to find the truth nearby.

look they still got pilots hahaha .

Yes, good point! So limiting the aircraft to 9.5g and adding an unnecessary 90kg for the pilot and about 250kg for the interface/windows etc. By 2030 we should see the first single crew commercial aircraft delivered.

That isn’t a bad thing as such ucavs can be hacked and jammed easily.

Whilst there are countries with budgets exceeding hundreds of billions of dollars on defence, the next generation of all military hardware’s will be in the pipeline. Defence is all about being as many steps ahead of your prospective adversaries as possible. With a heavily media hyped but potentially accurate statements on a new cold war with Russia and arguably already one in existence with China and US, there’s likely to be a ramp up of new designs and concepts…

A lot of criticism of F-35 would have been avoided if the Harrier had remained in service until F-35 was ready to replace it.

should have kept the Sea Harrier in service until the F-35 is in enough numbers came on board.

The Harrier offered nothing for a Navy vessel. It was purely ground attack and the I Class were well beyond their prime.

Really,what aircraft were used in the Falklands conflict then?

FA2…the last British Fighter, much missed, if only they could have worked out a way of fitting the GR7A/ 9A engine to it. The RAF could have stuck with Tornado (the correct decision for them) and the FAA could have carried on with its stand alone fleet to bridge the SHAR/F35 gap.

This photo is taken from the si-fi film ” Stealth ” but as future aircraft design is maybe we will see simular shaped jets within the next few years.

Hmm no I don’t think it is. There’s no EDI and no Talon, so it can’t be from Stealth.
Although if you have citation id be very pleased.

Northrop Grumman created the computer generated image you see in the photo above, it’s from an advertisement they created recently and certainly not from a film.

To be fair it does look like the planes from stealth.

Why put a person inside?

I suspect it will be a long time before UAV replaces pilots in fighter jets. You can’t do dogfight style fights via link and so they will have to be fully computer controlled, and at least for the time being humans can out trick a computer.

If a day comes where fighters rely purely on beyond visual range weapons (lazor, plasma etc) then there will be no need for pilots, but we aren’t there.

This is a bid for funds?

the next generation bomber!

THATS WHY US IS BEST AND EVERYBODY IS WASTE

his just a troll

Have they been in talks with the makers of Independence Day: Resurgence?

I once drew a flying supersonic submarine with cannons all over it. It was ace. I was six. I won a curly wurly.

Excellent. But first you are going to need a phony made up war to justify the trillions of dollars it will cost…..still it will keep the shareholders happy……

Don’t think it’ll be long before they will have an actual protatype built and flying.

Its got a friggin “Lay-Zor”… Should we not be trying to make our 4.5 genelation fighters fulfil their promises before moving on to the next thing…?

Mislabeled as a “Fighter”, this design would be more accurately defined as either a “Tactical Bomber” (in size only, due to its relatively small warload capacity) or even better, a “Regional Bomber”. The layout is not conducive for maneuverability, instead, being more optimized for speed (supersonic cruise), and a lower radar profile from the front. Also possess a lifting body layout, so a possible concept for a higher altitude (ie; edge of space) operational realm. The animation shows barrel rolls, which is silly, serves no purpose, no application in a bomber. It is highly unlikely that NG will receive a… Read more »

Ah so now its now NG’s turn to fleece the US Taxpayer of $ Billions after LM and the F-35 and Boeing with the tanker. Its like ‘My turn next’ on the US Military spending merry go round …

And for the record I think the F-35 will do OK as long as we are allowed to do OUR thing with OUR aircraft.