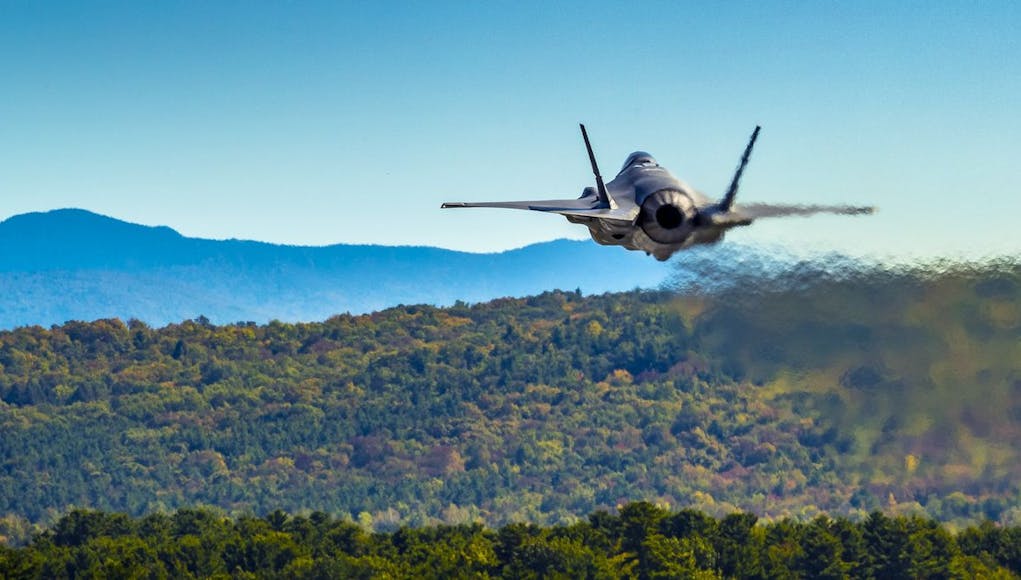 “The arrival of the F-35 is a significant milestone for the Green Mountain Boys of the Vermont Air National Guard and state of Vermont. The incredible hard work and dedication from our Airmen and the support from our families and community have brought us to this very moment,” said Col. David Smith, 158th Fighter Wing commander.

“The F-35 provides tremendous capability and secures our future for decades. We will continue to be ready to answer our state and nation’s call.”

With stealth technology, advanced sensors, supersonic speed and superior range, the F-35 is one of the most advanced aircraft in the world. The F-35’s ability to collect, analyse and share data, is a powerful force multiplier.

“As the Air National Guard’s legacy aircraft age and threats advance, the F-35 is essential to maintaining air power now and for decades to come,” said Greg Ulmer, Lockheed Martin vice president and general manager of the F-35 programme.

“We are proud to partner with and build on the Guard’s rich legacy as we deliver the 5th Generation of air power to the Air National Guard. The men and women of the Guard deserve the most advanced technology – and with the F-35, they will always be a step ahead.”

With the addition of the Vermont Air National Guard Base, F-35s are now operating from 19 bases worldwide. More than 425 F-35s have been delivered and more than 890 pilots and 8,230 maintainers have been trained.

Eight countries have F-35s operating from a base on their home soil and seven services have declared Initial Operating Capability.

Images of the Air National Guard’s First F-35 flight at Lockheed Martin in Fort Worth, Texas can be viewed, here

Wow! So here we have a Reservist Corps that receives the best equipment in the world! In addition they are 100 000 strong and operate 1000 aircraft!! This alone-apart from the USAF,Marine Air Corps and US Navy Air component, makes the ANG one of the top ten Airforces in the world in terms of numbers!

Vermont is clearly determined to defend itself.

Great news, but I’m a little surprised that the ANG get brand new equipment – I’d always assumed that they operated older USAF airframes.

Me too but still jealous that they have the awesome F15 in service. RAF reserve Units have not had any serious aircraft to operate in recent decades to the best of my knowledge

The RAuxAF has no aircraft at all Geoff.

Morning Daniele-like a pub with no beer :):)

They just often get lower priority of modernization. The ANG exists to provide a corps of experienced and easily recalled pilots. In addition it is both morally and politically untenable to kill someone’s dad or uncle because of elderly or unmaintained equipment so Guard gear has to be kept relatively updated.

There seems to be a complete lack of knowledge as to the role of the Air National Guard in the United States on this forum. Yes, the Guard is a reserve component but it is solely responsible for the air defense of the Continental United States and maintains about 95% of the air defense alert units. The Air Wing in Vermont, for example, conducted the cap missions over New York City after 9/11. It is an ANG wing that provides alert aircraft for the defense of Washington DC. The Air and National Guard are fully integrated with the active duty… Read more »

Nope. I was fully aware of the role the ANG take myself regarding air defence.

But not surprising given that this is a UK centric defence site.

Is the Air Force Reserve still existent alongside the ANG? I recall in the Cold War it had thousands of aircraft itself.

Yes but isn’t as large as the ANG. Because it is harder to have a civilian job with the higher number of call ups and training.

Daniele I have found the National Guard, and it must be the same for the ANG, to be more embedded with their regular counterparts, and many of those serving have come straight from the regular forces. Also, they are operationaly more capable than our reserve forces, and have some of the better kit, although they have better funding. Having worked with them in the States, albeit many years ago (And Herrick) they deploy as formed units, and are more supported by their employers and the public in general. In the States the citizen soldier goes back a long way.

Fully equipped I expect too mate.

As far as I’m aware the only units we have that deploy as formed units are the Reserve FH’s of the RAMC and various minor units. Certainly not Infantry Battalions or various CSS Reserve Regiments.

In the US right now, there is a huge recruiting drive for ANG, you see posters and adverts everywhere, but then there is for pretty much all the arms…probably all of the time

Thank you Sole, we may agree to differ on many occasions but you saved me replying to Mr angry, cheers.

Good Grief! Get over yourselves already. Someone realizes from the comments that the posters lack basic fundamental knowledge about the US National Guard and decides to educate them. You take offense and beclown yourselves in response.

Nothing is more ignorant and stupid than SoleSurvivor’s comment that the American public thinks the ANG is fighting aliens. The National Guard is embedded into the fabric of American society and Americans know very well their role. And admire them for it.

As I said, you beclown yourselves.

That’s not what happened at all, people do clearly have “basic fundament knowledge” going off the first posters comment, it just wasn’t enough for you so you got on your soapbox And not for the first time on here either, you only ever comment to try and correct people angrily, rightly or wrongly..about US defence, on a British defence forum, instead of being like Elliot or Helions, who are respectfully informative when giving information to people taking an interest in US defence, you take offence to us not being experts If there is a Brit doing the same on a… Read more »

Sole, you need to remember the septics always need to be dominant. Just look at the language of the stable genius…he leads the way

Yep, that is why I offered something obscure like the QARANC…I can up the anti and expect them to know of the FANY ( PRVC ) maybe?

The FANY!!?? Daniele-go to your room!

June 19, 2021
HMS Queen Elizabeth's F-35 jets are going into action against Islamic State forces and will strike targets in Iraq and Syria.