Airbus say they have achieved the first ever fully automatic air-to-air refuelling (A3R) with a boom system.

The flight test campaign, conducted earlier in the year over the Atlantic Ocean, involved an Airbus tanker test aircraft equipped with the Airbus A3R solution, with an F-16 fighter aircraft of the Portuguese Air Force acting as a receiver.

“This milestone is part of the industrialisation phase of A3R systems ahead of its implementation in the A330 MRTT tanker development. The campaign achieved a total of 45 flight test hours and 120 dry contacts with the A3R system, covering the whole aerial refuelling envelope, as the F-16 and MRTT consolidate the maturity and capabilities of the development at this stage. The certification phase will start in 2021.”

“The achievement of this key milestone for the A3R programme highlights the A330 MRTT’s excellent capability roadmap development and once more confirms that our tanker is the world’s reference for present and future refuelling operations. Our special thanks go to the Portuguese Air Force for their continued support and help on this crucial development.”

According to the firm, the A3R system requires no additional equipment on the receiver aircraft and is intended to reduce air refuelling operator workload, improve safety and optimise the rate of air-to-air refuelling transfer in operational conditions, helping maximise aerial superiority.

The goal for the A3R system is to develop technologies that will reach fully autonomous capabilities.

At this point, the fuel transfer is initiated to fill up the receiver aircraft and once completed and the disconnection is commanded, the boom is cleared away from the receiver by retracting the telescopic beam and flying the boom away to keep a safe separation distance. During this process, the ARO simply monitors the operation.”

Airbus also add that the picture at the top of the article shows the first fully automated refuelling contacts between an Airbus tanker test aircraft and a Portuguese Air Force F-16 fighter jet.

Just need to get this fitted on the UK A330 now.

Are the RAF’s P8 Poseidon, F-35 and C-17 currently capable of AAR via a boom? Built for but not fitted?

Whilst the RAF A400M and F35B use probe and drogue AAR, there is no AAR capability at all on the P8 or C17.
My question was based upon the possibility of us adding the above new A3R boom system to the RAF A330 MRTT Voyager tanker. If we did, are our existing P8, C-17s (and the F35B) already fitted for boom refueling? Or would they require retro-fitting with all the gear?

Crab, our P8, C17 and RW-135 are fitted for boom. All the F35Bs/Cs are fitted with probe and drogue as on the Bs there’s a large rotating fan where the boom receiver is usually placed. The Cs because generally there’s not many boom tankers in the navy world and most in air refuelling is using buddy Pods

But UK crews also don’t train for it.

There may be a few of the P-8 crews who have completed boom refuelling courses as they were trained for a number of years in the US.

No worries Crab. Personally other than flow rate boom refuelling doesn’t seem to provide many advantages.

The whole point of RAF getting this is less to do with AirSeeker, C-17 and P-8 and more to do with allied interoperability. Australian KC-30A can refuel all allied aircraft over Syria and Iraq. RAF Voyagers can only do RAF, US Navy and French Air Force/Navy. Tankers are one of the few valuable NATO interoperable assets.

I understand that Richard and hopefully we can swap in and get some with booms and outer drouges. My point was more of a general point regarding booms, other than flow rate I personally can’t see the advantage.

The point of them is to do with pilot training and workload. It requires a lot of training and practice to teach pilots to do this safely and stay current. Particularly at night. Many pilots just can’t get it right, lose confidence and fail to become fast jet drivers. Many probes are broken in the process as well and this can sometimes prove dangerous. Much easier to take the pilot out of the loop and get him/her just to fly up to the tanker and take up station behind the markings and get the boom operator, or in this case… Read more »

Also, picture a jet driver returning from a mission with half a wing missing. Probably partly incapacitated in some other way as well. Much easier to do a boom operation to get him home than ask him to spear a basket!

Is there any benefit from this? OK. The machine does it. A bloke does it ok now doesn’t he? If the machine breaks down, will a bloke be sat there on stand by?

It joins a string of very clever but somewhat unnecessary innovations. I imagine most aircrew would want a human being ‘in the loop’. Devices that signal potential conflicts are certainly wise, but ‘look! No hands!’ is a bit risky even now. You’d always want someone there looking to see if all is going well. 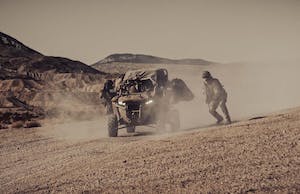