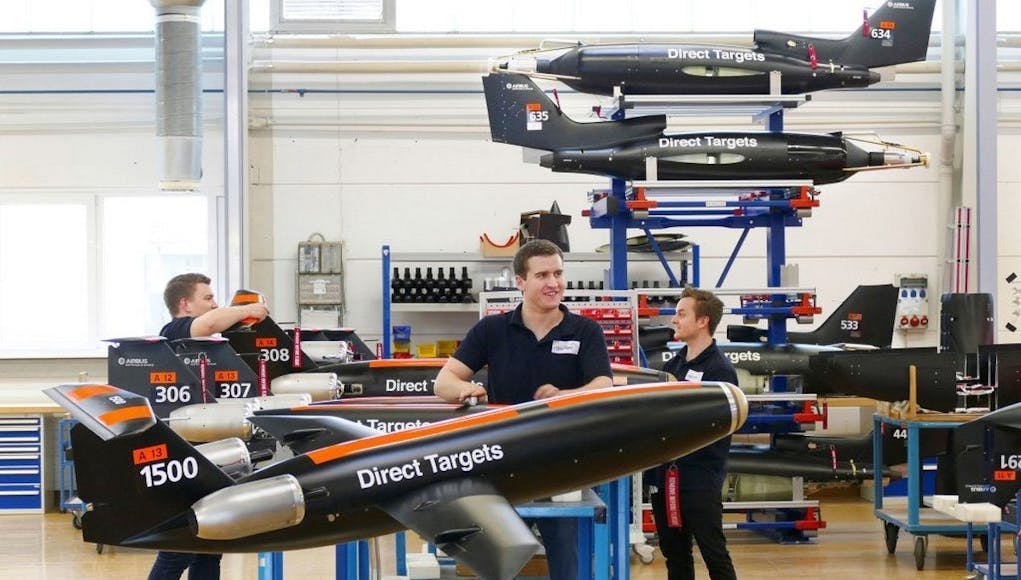 Airbus has completed its 1,500th target drone at its Friedrichshafen site in Germany.

The company say the drone will soon enter service on behalf of the German Armed Forces. Since 2002, around 40 employees from the Target Systems and Services department have manufactured and operated target drones for training and the evaluation of weapon systems and related units.

Armed forces worldwide are supplied with the drones say Airbus.

“Since production began in 2003, this line of drones has grown to include four models with seven variants. The DT25-55 and the recently developed DT45 are the latest members of that system family.

The DT25-55 consists of a carrier drone (DT-25) transporting a target drone (DT-55) on its underside. The are launched in tandem by means of a catapult and, once inside the area of operations, the speedier DT-55 separates from the carrier drone and begins its mission of target simulation. The DT45 is an all-purpose drone used to simulate very high-speed targets. Thanks to its extremely low-level flight capability, for naval forces it can play the role of ‘sea skimming missiles’. All drones can either fly a pre-programmed course over waypoints or be remotely controlled during flight.

They mostly use the aerial target simulation as a full-service model. In a flight campaign, Airbus brings materials and personnel to the mission site, assembles the launchers and ground control stations and prepares the drones for launch. The flights are planned and carried out in accordance with customers’ wishes.

The drones simulate various threat scenarios, such as from aircraft, other unmanned aerial vehicles or cruise missiles. The combating of these threats can then be tested with live ammunition. Airbus annually carries out around 10 such flight campaigns with 150 to 200 flights.”