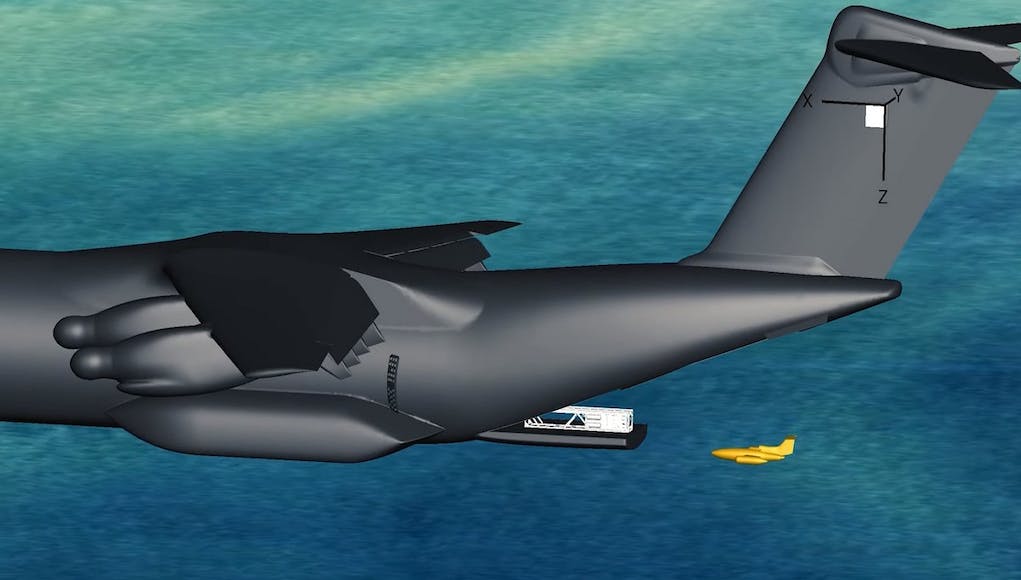 Airbus say that the development of the UAV Launcher project has been performed in a non-traditional way in only half a year in a close cooperation between Airbus, DLR, Geradts GmbH and SFL GmbH. It included concept, development and production of a UAV Launcher prototype for the A400M.

“We have developed a UAV launching mechanism to launch drones from a flying A400M plane. Imagine a combat scenario where multiple remote carriers are required. If you have an A400M, you could launch them and later on multiple UAVs,” Andreas Heckman, Project Leader UAV Launcher, said in an official video.

“We had two main challenges in our project. One is time: we only had six months to go from a concept to a flight demontstator. And we had to work remotely due to COVID. And secondly safe preparation, to perform a safe separation of the UAV from the A400M trough simulation and also trough safety analysis. We have assessed all safety scenarios and developed safety procedures for the crew.” he added.

The A400M has the ability to carry a 37-tonne payload over 2,000nm to established and remote civilian and military airfields, and short unprepared or semi-prepared strips.

Well Virgin are launching orbital rockets from B747’s so I gues it was only a matter of time before someone tried chucking a UAV out of the back of a transport plane. I had the pleasure of working with the Air Drop squadron at RAF Lyneham for a short time. The guys who assembled the drop pallets with supplies for the Paras. The some of the ‘systems’ they used were literally string and duck tape. I kid you not. The tape had to be very precisely measured so that the extraction chute would pull the main chute and rotate the… Read more »

Hi CR. The US are a bit ahead of the game here in both the launch and recovery of UAVs from cargo aircraft with the DARPA Gremlins program.
https://www.thedrive.com/the-war-zone/38125/darpas-gremlins-drones-were-just-inches-from-successfully-being-recovered-in-flight

Watcherzero
Reply to  Glass Half Full

US first launch was Jan last year after four years of development, Airbus did it in six months.

Glass Half Full
Reply to  Watcherzero

Not sure what point you’re making? I wasn’t commenting wrt development time and neither was CR. He said “Well Virgin are launching orbital rockets from B747’s so I gues it was only a matter of time before someone tried chucking a UAV out of the back of a transport plane.” I pointed out that the US have already done this and have also attempted in-flight recovery, information he might not have been familiar with. The Airbus system hasn’t flown yet and appears to be only a launcher with no recovery, so its a long way behind the current capability of… Read more »

Tobe fair the US has been air launching drones on real combat missions since the 1960’s. And the GREMLINS solution is far more advanced than Airbus’ as it includes airborne recovery that the Airbus system does not.

How do you recover the UAV? Seems fairly expensive in the long run if UAVs are just one time use. Considering many UAVs have fairly decent range, i am not sure what is the added value here. I am not convinced by what seems to be niche use at best. Maybe instead Airbus should focus on finishing the EuroMALE drone which is taking a long time, as well as start developping cheaper versions