The aircraft, known as MSN59, is the twelfth to be delivered this year at the Final Assembly Line in Seville and the thirteenth to be accepted by Germany.

The A400M is steadily becoming the backbone of the European transport fleet and in recent weeks began to demonstrate its full potential as aircraft from Germany, France and the UK undertook intensive hurricane relief missions in the Caribbean.

MSN59 will shortly be ferried to Wunstorf, Lower Saxony which is home to Germany’s A400M unit – Air Transport Wing 62. 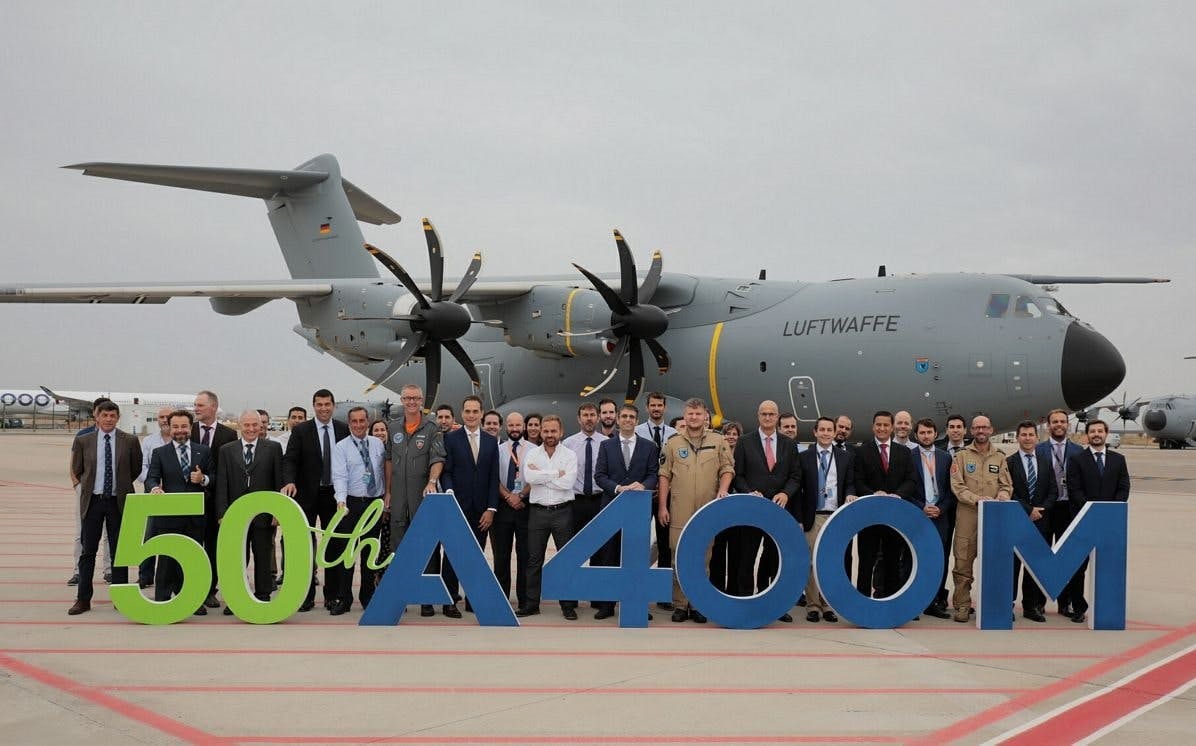 The A400M aircraft in RAF service is named ATLAS and the RAF received its first of 22 aircraft in Autumn 2014 with deliveries expected to be complete by 2019.

Not quite yet Rob. The C4’s are scheduled to carry on with special forces, possibly as late as 2035, the mini SDSR permitting I suppose.

Not strictly true. That was a short term measure reflecting the previous delays in both production and tactical clearances.

Having flown many hours as a “passenger” in the C130 I am aware of its strengths and weaknesses.

It is an outstanding tactical transport, the A400m simply does not have the ability to perform tasks in which the C130 excels.

Hi Mike – Great to have people with first-hand experience here. What are the C130 tasks that an A400M can’t perform or pales in comparison to C130 in those tasks?

Julian, I have never flown in a A400m and therefore my remarks are based on information in the public domain. The A400m was designed and built a specific set of requirements as defined by the needs of their potential users. The Germans are reporting that the A400m is unable to meet those requirements. Examples are the inability to parachute out of both lateral doors of the A400m at the same time, the powerful turbulence from the engines forces the paratroopers to collide after jumping. This is dangerous to the jumpers. Another example is much longer runways are required. Another the… Read more »

I am a engineer type rated on the A400m…there are only a few of us and I have also worked on the C130….. forget it folks…The shorts Belfast was better 50 years ago….The A400m ..it could have been a great aircraft in a great market but no it is a joke

“A German Defence Ministry spokeswoman declined to comment on the report but said the A400M had shown in daily operations that it was a capable aircraft and that it was known that the plane did not have all the capabilities required by the contract.”

Some C130 will have to stay on with 47 Squadron as it is reported DSF was unhappy with the A400 for SF roles. Hercs much more suited so as commented on above the Atlas is not a total replacement.
Quite right too as 22 is too few.
22 Atlas plus 8 C17 plus a dozen or so C130J’s much more acceptable.

Could this be why we hear noises every now and then surrounding the osprey?

I am sure there is one area where the A400m exceeds the C130 and that is the onboard toilet facilities.

Mike – I think some context is needed here. The A400M was not designed to replace the C-130 in its entirety. It was an evolution of what that aircraft could do but do it more effectively, at less fuel cost and with a greater payload. In all those areas it has achieved the objectives. To criticise it because a few SF prefer the C-130 is a Non Sequitur … It was designed to carry more than the C-130 into areas and onto unprepared landing strips the C-17 cannot go. And it does that very well. That does not deny the… Read more »

The US Army has been completely satisfied with the C-130 the modification of Stryker was done just to appeal to the appropriations committee and win the contract it would never have operationally deployed them. Armored vehicles are by US doctrine deployed by Globemaster IIIs and the larger C-5 Galaxies. C-130 aircraft are meant to transport Hummvees, Infantry/Airborne, and supplies. Right now the program to replace them isn’t scheduled to buy aircraft until 2030 and won’t start competition until 2024-25. So far it looks like the design that’s positioned to win then is the KC-390 due to Embraer and Boeing having… Read more »