Aggressor aircraft have launched a simulated air attack against HMS Prince of Wales, the purpose of this training is for the vessel to practice defending against air attack.

Aircraft, some operated by Draken International, have been simulating air attacks against the carrier.

HMS Prince of Wales under attack from a Draken Falcon 20 EW this morning, likely related to an air defence exercise. pic.twitter.com/W1WORFzVAE

The Falcons are flown by Draken International.

After the much-publicised first encounter at sea with her big sister HMS Queen Elizabeth and her Carrier Strike Group and a brief stopover in portsmouth, sea trials have now resumed. The Royal Navy say that the carrier is undergoing an intensive period of trials and training, establishing her lethality and ability to sustain operations.

Forgive me if I’m missing something (such as the aircraft flying a holding pattern), but the image supplied from flight radar shows the Devon/Dorset coastlines, not the Cornish coastline. 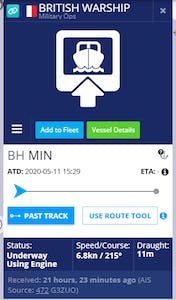 Looks like the report came from RAF Luton or HMS Massive !
The true test of geography comes with the decision on whether it`s cream first or jam !

scones. otherwise they wouldn’t have an e at they end would they.

She sank so fast?

I heard it was a seal leaving to hunt for fish.

Did you take that while under a thick blanket of smoke from the Russian Carrier’s smoke stack?

Do you mean Typhoons that would need air-air refuelling, negotiate and pay sometimes friendly states for overflight that may or may not be granted ?

Yeah including all that. Just curious. Can’t really include overflight costs, as carrier is not exactly free to operate.

Can’t include overflight ? Do you think Akrotiri doesn’t have operating costs ?

Fair point, but then it gets really complex, as you would need to compare carrier task force running costs against a fixed airbase.

Agreed. It’s a cop out but in the end the only answer is depends. We can just disagree how often the depends end up favouring each side.

Both have a known annualised cost of operation as well as a per launch support cost. But the carrier is unique in that it can set up in international waters wherever it wants and do whatever it wants as a massive floating airbase. And shift itself to where makes the tasking easiest / most effective. This all comes back to the operational radius calcs. Yes you can fly Typhoon from UK to Libya to demonstrate that it can be done after you scrap Harrier. BUT it makes zero sense doing that and the tempo you can support doing that is… Read more »

The same applies to f35’s flying from the med still have to fly over the same countries and if they are hanging around almost certainly refuelling from British or allied tankers.

Difference is carriers can move 500 plus nm’s a day airbases can’t. Best historical example is Kuwait 1961. It was threatened by Iraq with invasion and asked for help. We had forces and airbases in Cyprus but couldn’t get overflight permission from intervening states. In the end RN/RM including carriers did the job.

Was he on a carrier ?

Carrier are as much geopolitical tools as anything else. Look at how the US use them, look at the the Elizabeth first deployment to the Pacific, even the sorties as part of operation shader are as much about geopolitics as the are making a contribution to operation Shader or experience.

The reality is that although ISIS is a threat (and need to be removed form any power base) the carriers are great big statements of intent Aimed at our geopolitical competitors ( nation states and empires) who don’t want to play by the rules of the game.

They are based at Bournemoutb airport with Chobham.

Defending the carrier from air attack? Without a Type 45 or 23 in concert, the carrier has precious little to defend herself with! Even the 30mm cannons have been deleted. Effective range of Phalanx is about 4km or so? That’s way too close for comfort. I know this has been beaten to death but I still can’t fathom why we are the only carrier operating nation that has neglected to add a point defence missile system. Even the French added Aster 15 to CdG. Can only be down to money; if each carrier came in at 3+ Billion, is the… Read more »

Pretty sure the carrier has 12 F35Bs in a standard CAP to defend itself with. That seems pretty formidable defence against enemy aircraft 🤷‍♂️ Adding an onboard point missile defence loses you both deck space and munitions storage space. Both are better utilised for F35B use, which IS the carrier’s primary armament. If an enemy has taken out the CAP, and the accompanying T45s and T23/T26s, then I doubt the 30mm will probably do much good (or the Phalanx to be honest). Following your train of thought though… The carrier doesn’t have any onboard defences against warships either, so maybe… Read more »

Thank you for the sarcasm but you still haven’t answered my question. The US supercarriers have a much bigger air wing that the QEs but STILL have a point defence missile system onboard. We are the ONLY carrier operating nation without it – why is that? All the other countries can have a CAP in place just like us – do we know something they don’t? Every other country thought it worthwhile to add so why not us? Simply posing the question that’s all.

Big boy answer only please or get a grown up to help you.

I don’t know cost of maintaining a ciwis and SAMs? or just the lack of crew. i really don’t know how the mod works. its like they just slap a lot of expensive stuff together and leave like the cheap stuff out for “future integration”

The answer is pretty obvious, the experts in our Navy know better than armchair admirals on websites. The Royal Navy has lead the way in carrier development from the very experimental carriers. It is again with the world’s first carrier designed for carrying purely 5th generation aircraft. Advancing design means change; abandoning angled flight decks, twin islands, automated munitions handling, etc. One of those decisions has been to focus on the carriers primary armament, it’s air wing, rather than wasting space and money on something never to be used:- onboard missiles. It’s analogous to the development of HMS Dreadnought that… Read more »

ya but the f35s will take time and crew needs to be at high alert. unless the crews already in the cockpit and the f35s do a transformer like vertical take off then no not really. but also missile the f35s cant defend from missiles which will be aircrafts primary weapons in the future. adding missiles to carriers adds an extra layer of security. plus you don’t even need truly integrated SAMs something like RIM 116 system will do.

Clearly don’t understand concept of a CAP. The F35s deal with approaching aircraft before they can launch missiles. If the enemy do launch, the T45 takes out the missiles with their Asters (Sea Viper). If the Astors fail than the T23/T26 have Sea Ceptors. And should the missiles make it past all that there’s Phalanx.
(With superior missiles such as Sea Viper and Sea Ceptor available, what’s the point of adding RIM-116 too? 🤷‍♂️)

it takes at the very least a 1 minute for an f35 to take off and take one push of a button to launch a missile and after they are gonna run! plus sea vipers the main line of defence. and i didn’t say we needed a rim116 system. i said something along the lines of that. also i said we could we didn’t have to!