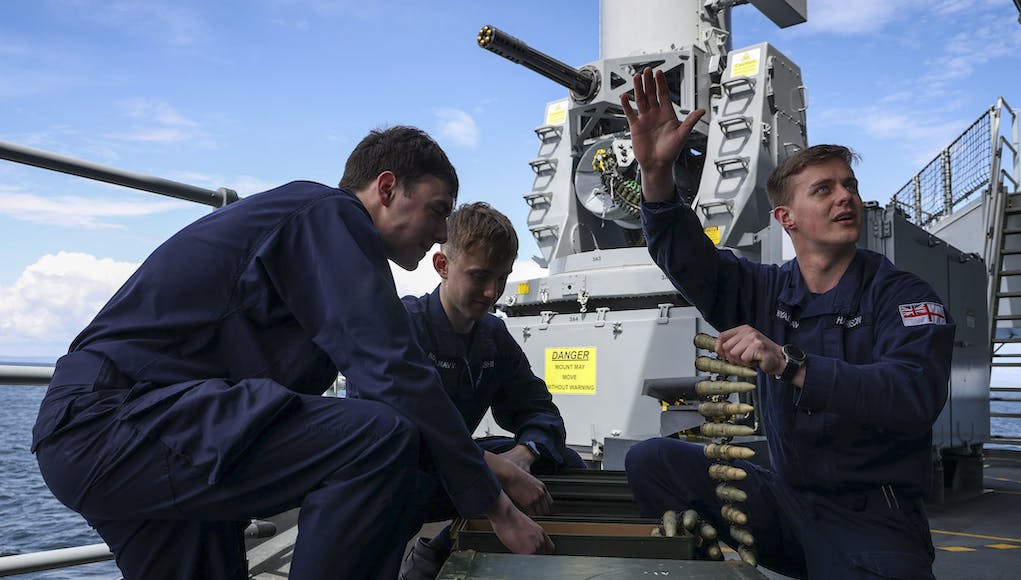 HMS Prince of Wales has tested her three Phalanx guns as part of efforts to make the vessel operational.

We have begun testing our 3x Phalanx guns today. Last week our Weapon Engineers spent a little time re-aquainting themselves with the systems. #PWLSatSea#EngineeringUK #Engineering pic.twitter.com/LVspMCVPzD

Phalanx CIWS is a rapid-fire, computer-controlled radar and 20mm Gatling gun system and is the Royal Navy’s primary defence for ships against the threat of anti-ship missiles.

“The Portsmouth-based warship has spent much of her first fortnight back at sea in the relatively sheltered waters of Lyme Bay conducting aviation trials with the RAF and Commando Helicopter Force.

The ship’s company has changed substantially since she last sailed in the spring of 2020 – and since her flight deck last welcomed helicopters, so it’s been a mix of brushing up on old skills and new experiences for a good number of sailors.

After the much-publicised first encounter at sea with her big sister HMS Queen Elizabeth, regular training resumed with Merlin helicopters of 824 Naval Air Squadron making use of the carrier to practise refuelling skills.

If the carriers are not going to have 4 lots of 30mm RWS fitted would there be any consideration to maybe having a fourth phalanx in the aft starboard area? The forward starboard phalanx position really restricts the arc of fire of the RWS spot so I don’t think it worth putting any RWS there unless they reposition the phalanx a bit. I read somewhere that SeaRam was trialled on HMS York a while back. Is it worth exploring that again on the carriers or SeaStreak ER or even CAMM option to give a stronger defensive armament? It’s going to… Read more »

The current plans are to give them less defenses than designed, not more. Personally I feel using the CIWS on FAC will just degrade the carrier’s defense against the likely missile/drone strike that would follow.

Seem to remember an article stating any “sam” on board one of these would create potential for a FoD problem for the F35. Don’t know if its a factor. I agree though, for something so costly it seems totally open to attack. Never forget Murphy’s Law.

Every other navy puts SAMs on there carriers without difficulty. These arguments are to cover the fact that the treasury are trying to claw back every Penny they can from the carrier program. Of course the extra Phalanx should be fitted. In fact now they are not fitting the 30s they could use some of those slots that are better placed for Phalanx.

You are thinking of the Chemring Centurion:

Hi Ron, it was shown at DSEI by a company called SEA. It’s the Trainabke Decoy Launcher system, that looks it can also carry Marlet and maybe Sea Streak? I can’t copy the image but it’s on google. It looks great and good British technology…so let’s get some!!

Sorry for all the typos. I’m typing on my mobile.

It might just be for decoys only but some of the loaded items look like they might be MPM? /Martlet? I still can’t get the image up here. Sorry about that.

That’s a bit weird. It’s like the Russian revolver VLS but fires like CLSW. I wonder whether it could replace Phalanx. The reaction might be slightly slower but the extra range balances that out.

The block version of phalanx onboard has a THIM fitted ( The square box just visible on the side of the dalek dome) for surface engagement. 3 phalanx give hemispherical coverage of the vessel , ships move and part of ASM defense is to open up firing arcs for the mounts to give them the best chance of hitting the target. In full AUTO mode , you physically have to STOP an engagement from happening. Human input is to slow in AUTO mode to initiate an engagement so you let the computers and threat evaluation algorithms do the work (… Read more »

Carriers turn and this is last defence and all that but surely 4 phalanx is better than 3 at least from a bullet capacity perspective. And def need sea ceptor. Mount 2 aft, port and starboard and any little FOD there is should be blown off the ship as it lights up the main motor 30m up. For. 3bn outlay plus associate company equipment cost onboard (prob another 3bn) loss, having 2 batteries extra plus phalanx is surely minimal cost extra even with integration etc.

Hi Quentin. The firing arch isn’t restricted, the carrier does maneuver. And a huge amount of time goes into the design and layout of these things. HMS Ocean and the 3 Invincible class also only had 3 x CIWS. We took Sea Dart off the Invincible class to extend the forward flight deck to carry more of the vessels weapon systems. Aircraft. The QE class will eventually receive 4 x DS30M’s. And over time, maybe more kit will be fitted if the threats we face require it. But in the mean time, the T45 is the perfect carrier defence, along… Read more »

Hi Robert, HMS Ocean had 3 Phalanx’s as well as 4*30mm – which is another point as to why the carriers don’t. The 4*30mm mounts are still on thd vessel in Brazilian service.

I think the QE will receive the DS30’s at some point. But other systems have been given priority for this deployment. The carrier’s are still at IOC, and not full operating capability yet.

In other nautical news “According to Lt. Cmdr. Robbie Nash, the drones will make HMS Protector the first ship in the Royal Navy to have its own remotely-piloted aerial systems on board. “Hopefully we have demonstrated a viable route for other units to source and develop their own drone capability,” said Nash.”

Much is said about the armament of the carriers, but, remember they are very well protected by the escort ships. Just the RN ships alone can create many engagement zones against (for example) air platform/ASM attack. Firstly, the primary weapon system, the F35 with Meteor/ASRAAM. Secondly, 2x Sea Viper with long/medium range. Thirdly, 2x Sea Scepter short range. Fourthly, 9x Phalanx extreme short range. Total of 6 engagement zones from 0 to 800km. Plus decoys. Pretty formidable!

7x Phalanx on the RN ships, bumped up to 11x units if you include the two RFA vessels forming part of the group, and 13x if you include USS The Sullivans.

Hi Lusty-please can you this landlubber. from the above what are-RWS, FAC, FoD﻿🤔﻿

I was including the RFAs mate, but wasn’t sure if they had 1 or 2 units each, thanks for clearing that up! The USS The Sullivans is a serious piece of kit on it’s own, & I’m sure is very welcome in the CSG!

No worries. All of the RFA’s vessels are fitted to carry two units, with the exception of Argus. She has to rely on two 20mm cannon.

The Sullivans is a welcome guest indeed!

Hi John. And the reliability and kill probability of our modern weapon systems also give a great deal of confidence compared to previous generations air defence systems. You could well argue these are the best protected carrier’s to put to sea. 👍

Morning Robert, I totally agree! The true performance of our systems are never made public.

Carriers get gaps in the defence screens. That just goes with war operations. Even if unintended it happens. You get the enemy really inconveniently sinking some of the escort, luring them away or breakdowns, diversions etc; so it is vital to add a SAM to the carriers to give a better layer of defence before the last-chance CIWS are needed. The USN has far more escorts available for its carriers but still has ESSM & RAM SAMs before phalanx would engage. It’s pure spin & tight-fistedness that hazards the lives of the crews & the huge invesment we have in… Read more »

Hi John, I agree with all this but in a real conflict, escorts ships could get picked off one by one and then the carriers will be left almost naked! I hope it doesn’t happen. I like the Camm, Phalanx, 30mm armament mix on the T26s. Plus whatever gets put in the MK41 silos.

Whenever articles on CIWS appear and we get the same calls for more than 3 and arcs and so on I just look for GB’s latest explanation. Nothing else needs saying.

I agree with GB’s point, each Phalanx arc covers 1/3 of the ship. The problem is if one is out of action 1/3 is exposed as there is little overlap, add a 4th and you some redundancy as each Phalanx will have an overlapping arc. 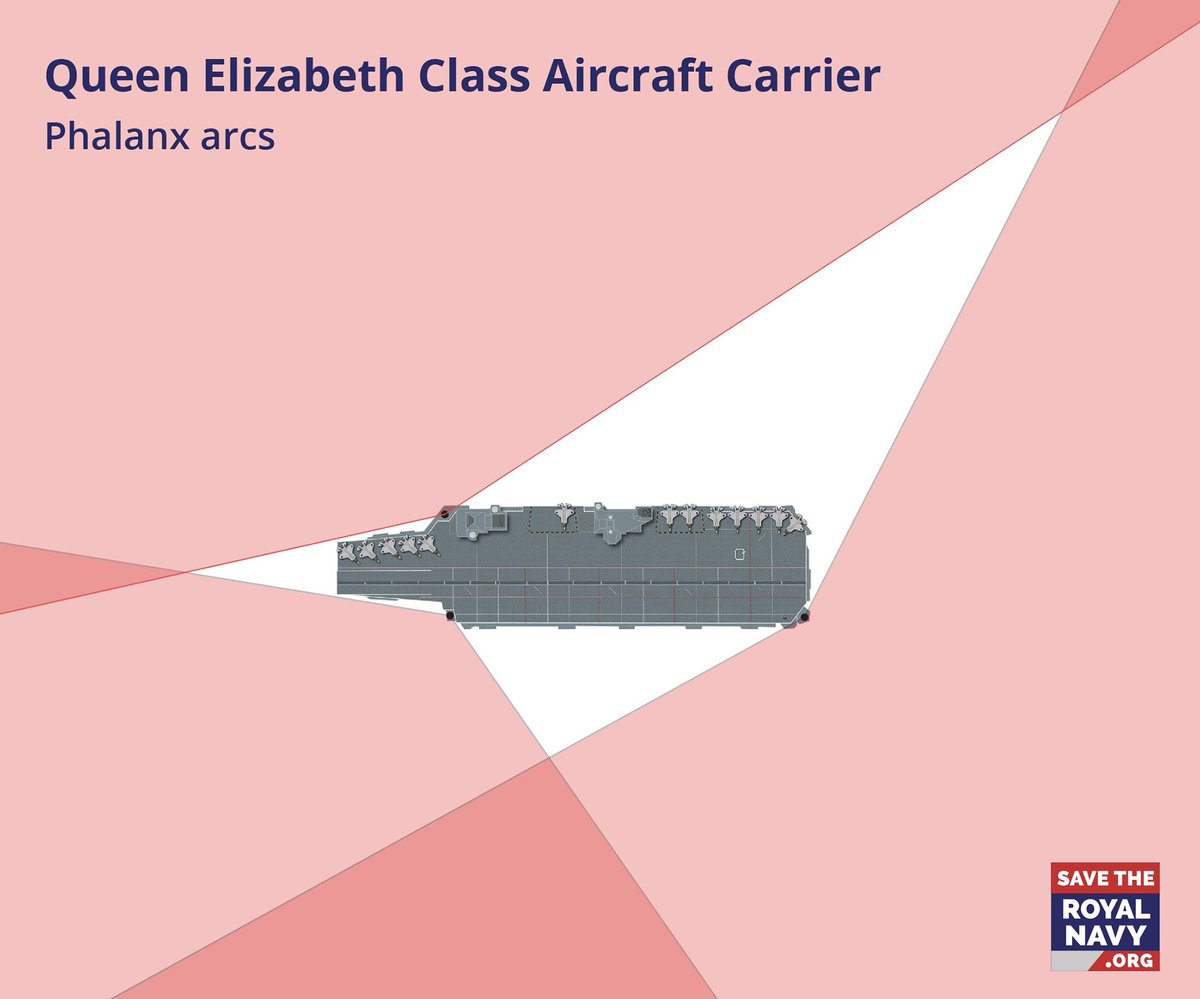 I think this illustrates it best

But wait… What if 2 break down? … Hang on let’s get 2 more to cover those gaps….no better yet let’s get 8 and put them all over the flight deck just in case…
The ship moves.
Phalanx mounts carry out threat evaluation.
The mount with the highest kill chance shoots.
Even with 2 mounts that happens.
During threat evaluation if the target is deemed to be flying outside the threat envelope i.e its going to pass fwd or astern it doesn’t get shot at.

Hi GB, with respect, despite e all the overlapping arcs you have to agree the near gap on the Starboard side of the carrier is huge! The two lifts obviously take lots of room. Looking at the new French carrier they’ve got 4*40mm in the four corners and 32*Aster! The Italian carriers are well armed too. But if we had a couple more T45s I wouldn’t be whinging too much… Lol 😁 I’m only a distant “armchair critic” but I still get passionate about this stuff all the way from Sydney!

Morning everyone, the idea of fourth is have a bit of a fall back I case a phalanx breaks down, runs out of ammo especially if subject to a large swarm attack. The whole starboard side of the carriers are very poorly protected in my humble opinion. It obviously wouldn’t be the case of all 30mm RWS were in place.

The 30mm are useless against aircraft or missiles. Combatting swarm fast boats is jsut about all they can do.

I disagree, those will show horizontal traversing at best, factor in vertical travel and you will get near hemispherical coverage as GB has often pointed out. Depicted are basic travel arcs, total coverage is highly classified.

It’s not the primary defence. It’s a last ditch defence.

Absolutely. If the CIWS ebgages then all the escorts have failed.

I think it a great shame the Oerlikon 25x 184 upgrade of Phalanx was not adopted. 25 x 184 is probably the minimum needed against modern anti ship missiles.

I figure that a significant upgrade to the QE class’ defences is very unlikely: Given financial constraints, logistical reworks, integration difficulties etc. (And the fact that a VLS would likely sacrifice hangar space) – It’s all probably considered too hard right now. SO i wonder if a stop-gap solution in an actual deployment scenario, would be parking mobile Phalanx trucks on the deck. Or maybe there will be a portable version of the direct-energy CIWS that the US are developing? (Just get a 50m power extension cable and plug it in somewhere? /s). I’m not sure how practical that would… Read more »