The country also recently increased its order of F-35s, making the country the second largest operator behind the United States, a spot previously held by the United Kingdom. 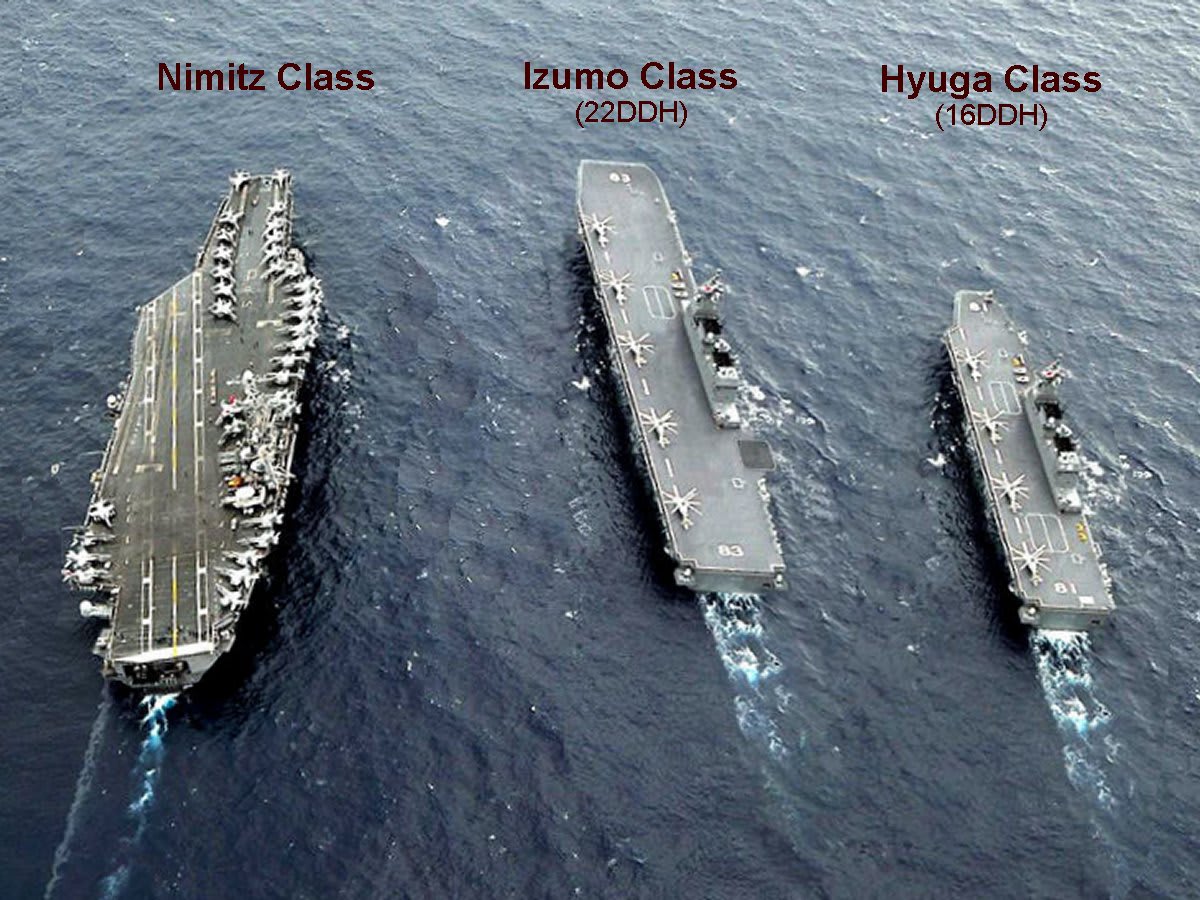 The National Defense Program Guidelines, which set out the aims and capability targets over a period of about 10 years for Japanese forces, state that the government will “enable fighter jets to be operated from existing warships, if necessary, to improve the flexibility of their operation”.

It was also reported recently that JS Izumo is to be redesignated as a multi-purpose escort destroyer to comply with Japan’s pacifist constitution that limits JSDF capabilities to self-defense.

“The Izumo was originally designed as a multipurpose escort ship, so it wouldn’t pose any threat to other countries if fighter jets are deployed on it,” Defense Minister Takeshi Iwaya was quoted as saying by The Japan Times on December the 11th.

According to the outlet Asahi, US jets would likely be the first to use the Izumo for landings and take-offs.:

“The government has also approved a plan to purchase U.S.-made F-35B fighter jets which have short take-off and vertical landing capabilities. The F-35B jets will be mainly used on the Izumo and Kaga, but the aircraft will not be deployed until after fiscal 2024. That leaves open the possibility of at least a three-year period when the Izumo would be capable of being used as an aircraft carrier, but with the Air SDF having no such aircraft in its arsenal.

According to several government sources, when Gen. Robert Neller, who was then commandant of the U.S. Marine Corps, visited Japan in March, Defense Ministry officials briefed him on the plans to retrofit the Izumo and said U.S. military F-35B jets would likely be the first to use the Izumo after it became a flattop. They asked for U.S. cooperation and advice in the operation of the F-35B jets. The U.S. jets would likely use the Izumo during joint training exercises with the SDF as well as when U.S. jets faced an emergency situation requiring immediate landing.”

Minister Iwaya also reiterated that the warship would not be an “attack aircraft carrier” capable of offensive military operations, although it’s hard to see how that distinction can be made.

As we reported recently, before this news, conversion of the existing Izumo class helicopter carriers was rumoured as an option for the F-35Bs Japan wants to purchase.

The 248-metre long Izumo, Japan’s largest warship equipped with a flat flight deck, was designed with an eye to hosting F-35B fighters. For example, the elevator connecting the deck with the hangar can carry the aircraft.

Good looking ships, nice clean lines.
However not sure how being a ‘ multi purpose escort ship’ stops it posing an offensive threat though.
Are JNSDF vessels and aircraft not armed ?

Not just an offensive threat, “any threat” apparently

I thought it weighed more than that, it looks like it weighs more than 24,000 tons, hard to believe the tide class tankers weighs 13,000 more tons than it hen they look a fair bit smaller.

Interesting and related to the other thread about the Tripoli is that the Izumo appears to only have 5 landing slots compared the the Canberra’s offcially stated 6, despite the latter having a ski jump and not being much bigger. The diagram here interestingly shows the Wasp with 6 too despite being a good bit larger than both, which puts into some question as to whether the Tripoli has 7 as I had posed in the other thread.

The Covour’s sub optimal deck design doesn’t seem to offer much help in this argument either.

One of the reasons for only 6 spots on the Wasp class is due to the size of CH53s. It’s true you could probably site 8 Blackhawk/Seahawks on the deck.

This is a good example of the type of cooperation I was posting about in the PoW thread yesterday. It’s a brave new world and we, as allies with many common interests, are going to have to adapt if we are to survive. One of the biggest advantages we have is that we have been working together for decades both politically and militarily. This type of crossdecking could also be done with the RAN’s Canberra class if the decision is made to modify them and buy F35Bs. The PRC does not have this generational cooperation advantage, indeed, it has very… Read more »

OZ will never convert Canberra class to suit f35bs far to expensive and has already been ruled out unfortunately and it would slash the amphibious capability’s it currently has, and Australians d3fence budget probably can’t afford it anyway. I wish they would buy a dedicated carrier like a QE Class in future, any country who wants a carrier like Hms QE could get one built in the UK now fast and cheaper than our two as we have learned allot and have all the skills right now but won’t have for much longer.

Yes, I understand that the RAN looked at and dropped modifying the Canberras to operate ~10 – 12 F35Bs due to the cost. However, that was several years ago and a lot has changed geopolitically since then. In particular, almost every other first rate navy in the region has either built and operates carriers or F35B capable light carriers (China, India, Japan) or, is planning to build F35B capable vessels (Korea, Singapore). Only Indonesia has yet to announce plans to do so (mostly due to lack of access to the F35 program I suspect). IMO Oz really has no choice… Read more »

There is a serious reason behind China’s belligerence. I believe its due to projected population growth. China has 1.4 billion mouths to feed at the moment with a land mass only slightly bigger than the USA. About 1/3 of the country is desert/tundra so is not suited to agriculture. To compensate one of their main foods sources is fish. They have been steadfastly occupying corals reefs and small atolls within the South China Sea against a UN mandate. They are basically controlling who enters and making it a no go zone for other countries fisheries. There has been a recent… Read more »

The Japanese government has recently placed an order for F-35Bs.

The more friendly nations using F-35B the better. Israel has even been rumoured to be interested for F-35B’s austere basing capabilities (https://nationalinterest.org/blog/buzz/worlds-best-fighter-jet-israels-very-special-f-35-stealth-fighter-55202). Israel is looking at developing or co-developing all sorts of interesting stuff such as conformal fuel tanks which would be particularly valuable for the B variant I would have thought so it would be good if Israel ended up with a vested interest in the B as well

JSF is the US equivalent of the Chinese belt and road initiative, only the allies pay and the US extends it’s military network and creates even deeper reliance.

A distributed sensor and war fighting network that will ring Russia and China.

Whilst i suspect this is the thinking in the US, it is a very dangerous way to proceed. If you push anyone into a corner, they tend to come out fighting, even the most passive of person.

China road/bridge initiative is based around building trade reliance, not military dependency

No the Chinese BRI is built on debt traps that will beggar the nations Africa for another 100 years if they proceed. Unless of course the Africans nationalize the Chinese investments and throw them out on their ass.

All these conversions are really highlighting that we could not afford the vanity project that was the 2 carriers. Yeah i know the QE have capability to carry more jets than the Japan/Italian/etc, but the plans are not to utilise the capability, which is clearly a cost driven decision. The QE need to be sailing regularly with 30-40+ jets on board and escorted with at least a pair of destroyers and a pair of frigates to achieve what they are designed for, which is to provide an effective deterrence. The US carrier strike groups do not need to carry as… Read more »

USN carrier battle groups can launch offensive operations within 15 mins of being authorized.
Every USN vessel is fully armed when it goes to sea unlike the RN which sends it ships to sea only partially armed.
When HMS Duncan was in the black sea she only had 8 missiles in her silos .

I don’t know how that information became public, you would think the MOD/Navy would have an invested interest in not letting potential enemies know our ships set sail without being fully armed.

They have done it since 2005 , it is to save money .
It is common knowledge that we only have 20 cruise missiles in our inventory and that there only enough aster missiles in the inventory to fully equip 2 type 45 .
It is the same with the army and RAF weapons systems non existent stocks .

It would be interesting to know how this compares with other countries, my guess is we have a lot of shinny gear on the surface but lack supplies, whilst other countries with similar budget lack the gear but have the supplies.

I guess the thought process is you can rebuild supplies faster than assets, but that assumes you have time, if it is a surprise then less assets and enough supplies to fight is far more useful.

You may need to check the cruise missile claim, 65 are in left service to be used by the SSBNs, HMG topped up the inventory a few years ago after a number were used. The Aster claim is more believable, as they are bloody expensive. I read somewhere one of the type 23s of Libya in 2010 only had 2 Seawolf loaded in the VLS. Any truth to that?

You sure on the 65? Didn’t we restock after Libya but since the manucturing has ended, so any fired since would have depleted that number

There is a order for 30 cruise missiles to be delivered by 2022. The seawolf story is true. RN ships routinely sail with the bare minimum in missiles but fully stocked 4.5 inch ammunition as we have loads of it in stock. The problem is there are long lead times on producing aster missiles and cruise missiles. I mean the USN sends it ships to sea stocked for war , a full compliment of all armaments and spares yet the RN thinks it is fine to send a warship into harm’s way not properly armed or provisioned on grounds of… Read more »

It is in a parliamentary answer in Hansard, I remember my friend who works for the MoD saying at the time it was a smoke and mirrors answers ,enabling the government to claim that is was ordering new kit but kick the bill down the road.

How do you know that?
If that is the case, then the Admiralty/MoD are either stupid or incompetent sending her off the coast of Crimea with so little defences. Russia would see Duncan sailing so close as an act of provocation (even though she was well outside the 12nm limit). It takes just one itchy trigger finger.
I know the days of the Navy acting bullish and standing up for themselves are long gone – oh I must speak to the Admiralty and await a decision!

Couldn’t agree more Steve….it’s like having a Ferrari and putting a tiny engine in it…..yeah, you can always upgrade…but it’s bollocks really!

Royal Navy now has enough crew for both carriers and their...