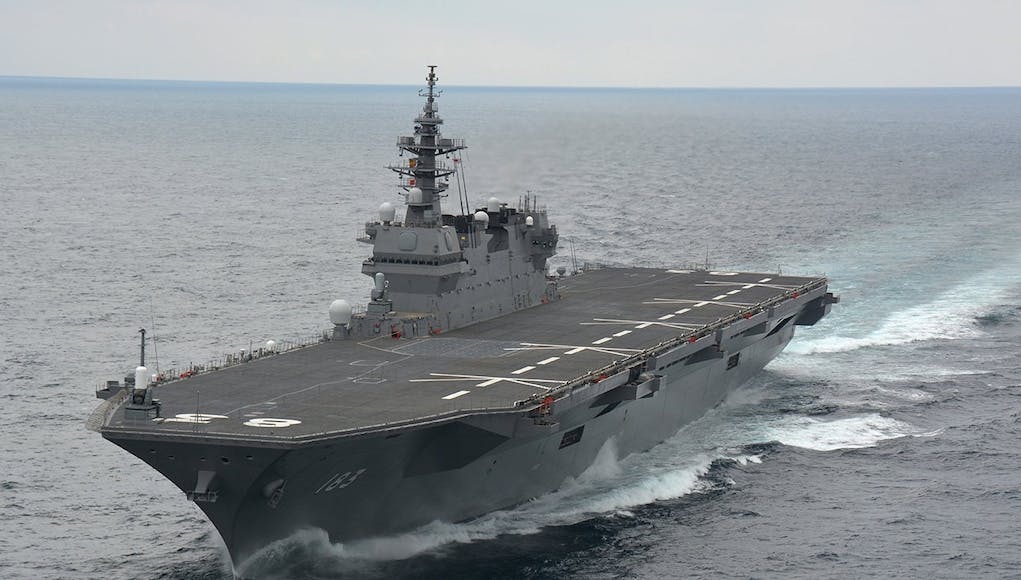 Japan is officially drawing up plans to acquire the F-35B, according to local media.

The Yomiuri Shimbun, a Japanese newspaper, said that Shinzo Abe’s administration “is planning to indicate the number of [F-35B] aircraft to be procured in the next Medium Term Defense Program, which is to be compiled at the end of this year.”

The story went on to report that the Abe government is “mulling including related expenses in the fiscal 2019 budget plan, with a view to starting the delivery of F-35Bs from around fiscal 2024.”

The article also notes the F-35B would be the perfect aircraft if Japan wanted to operate fixed-wing aircraft from its Izumo class helicopter destroyers, an idea that Tokyo was considering late last year.

The 248-metre long Izumo, Japan’s largest warship equipped with a flat flight deck, was designed with an eye to hosting F-35B fighters. Its elevator connecting the deck with the hangar can carry the aircraft.

Multiple plans are reportedly under consideration, some of which call for US Marine Corps F-35s to use the vessels, but others for Japan to procure its own aircraft. These plans quickly raised criticism from China, where government officials reacted negatively and urged Japan to “act cautiously”.

Looks like China is happy to build up its military but does not want other regional powers to do likewise.

How much would one of these LPH cost?

Wikipedia says $1.2 billion for construction of first unit to date.

The rule of the bully and one it has copied from Russia with little modification.

Believe me nothing built in China will work !!

Would you be willing to bet your life on that claim? Big difference between rhe Chinese selling commercially to foreigners versus selling to the Chinese military: us foreigners can’t hold a gun to the head of Chinese vendors, but their goverment CAN.

Japan is vulnerable to a first strike attack on its airfields, so the F35b is an ideal tool to have in its locker. The ability to forward deploy on its flat tops in defence of contested islands is the next logical step, presumably why the Chinese don’t like the idea. Recent talks between the UK and Japan on defence matters no doubt touched on the RN sharing their experience of operating stovl aircraft at sea . The UK has an agreement with the USMC on operating from the UK’s carriers and I dare say something similar will be done with… Read more »

The last time the RN helpee the Japanese develop carriers it didnt end well. Although in this case i think we can give them a second chance.

Bloke down the pub
Reply to  Barry White

Well we did help them with their whole fleet to be honest, my great grandfather worked on them. Very effective they were too as the Russians found to their cost.

It would be great if Japan bought some of the Queen Elizabeth’s for them. It would be interesting to see a Akagi, Kaga, and a Sorry streaming out of a UK yard headed back to Japan 🙂

Tomkat
Reply to  Bloke down the pub

Bloke down by the pub “Recent talks between the UK and Japan on defence matters no doubt touched on the RN sharing their experience of operating stovl aircraft at sea . The UK has an agreement with the USMC on operating from the UK’s carriers and I dare say something similar will be done with the Japanese.” Hate to burst your bubble bloke but the JMSDF has far more experience operating alongside the US Navy than the RN. The JMDSF has trained alongside the USMC for decades and they know full well the capabilities of the operating STOVL on amphibious… Read more »

Bloke down the pub
Reply to  Tomkat

I don’t see the two things as being mutually exclusive.

Tomkat
Reply to  Bloke down the pub

Tell that to the JMSDF and the USN & USMC. To the Japanese, there is only one country they’ll go to for advice on military matters. They have decades of experience. Training together. The JMSDF will go to the USN & USMC for guidance on operating the F35B from their ships. The US and Japan have defense agreements that go back to after WW2. We(USA) helped rebuild the Japanese military. The US has tens of thousands of military personal stationed in Japan. https://en.wikipedia.org/wiki/United_States_Forces_Japan https://www.theguardian.com/us-news/2017/aug/09/what-is-the-us-militarys-presence-in-south-east-asia The Seventh Fleet “Headquartered in Japan, the Seventh Fleet is the largest of the US navy’s… Read more »

How much will it cost to heat-proof the flight deck, is it a simple conversion?

They where built from the outset to carry the F35B, they are far to large just to carry rotary aircraft making todays annoucement as predictable as Man city winning the PL

If you’re referring to the thermal coating the QE carriers got to enable the F35b jet blast, this is a complex and time consuming operation – and very pricey.

I thought the process was simple. They used 3D printing technique. Unique at the time but Japan and 3D are almost inseperable.

Wonder if they want to build a QE class flattop under licence?

Their constitution doesn’t allow for the building of carriers

No their constitution only forbids weapons of offensive war. Carriers status as that has been in legal limbo since the US (who the Japanese normally cite in legislation for defense) changed their designation. Prior to 1970s CVA – Carrier Attack CVA(N) – Carrier Attack Nuclear, CVL – Carrier Light, CVS -Carrier Anti-Submarine. After 1975 CV – Carrier, CVN – Carrier Nuclear, everything else LHA or LHD. Perfectly non aggressive designations under very narrow interpretations of Japanese and US law. The Japanese Government have also been amending or subtly reinterpreting Article 9 for decades. That rate has been greatly increased by… Read more »

Surely they can’t work around the constitution by trying to define ships as things they are not. I know that they have operated ‘helicopter destroyers’ or whatever they call them for a while now, but the moment a large flat top has f35b on it it’s not really fooling anyone. I think I also heard they want to change the constitution. Makes more sense than saying a carrier isn’t a carrier anyway.

Or how about a ‘ through deck cruiser’ it worked for the RN in the 70’s.

I was under the impression that their current Prime Minister was after changing the constitution.

Will
Reply to  Paul

I’m not sure he’ll be fully focused on that now. Abe and his wife have been caught up in a land purchase scandal cover-up and he’s lost a lot of political credibility.

Why are people so surprised?
It was common knowledge that this was the ‘possible’ long term plan, to get round their none offensive status.

This will take some of the burden off The US, especially with Australia developing/acquiring similar platforms.

We have to accept, that the region has become militarised, to the point of: Prevention being better than Cure.

The Japanese could build a flat top- the Izumo class is a carrier for goodness sake, they just label them as anti submarine destroyers- or in terms of true aircraft carriers they could name them as “forward bases” or “heavy surface ships”. I would love it if the QE class was purchased by another country- they are amazing ships and probably represent the best conventional powered carrier that can be built at this time. Would be even better if we constructed them for the Japanese. F35B is definitely what the Japanese need and should order- say 48 aircraft for the… Read more »

Maybe and this is a good idea… hold on to your hats here folks Maybe we build the Japanese 2 QE carriers for £6 billion and they build us 3 LPH versions of the Izumo class for £3 billion- net gain is £ 3 billion to the UK but crucially the RN gets the ships it wants and needs desperately to act as escort carriers, anti submarine carriers and landing platform helicopters. Crucially freeing up the QE class to do their designated task- that of strike carrier and providing air defence and deep strike penetration using 5th generation stealth jump… Read more »

Don’t forget the men needed to crew them though.

Also we do not have enough helicopters or F35B to actually stock them.

2 QEC and also 3 LPH is a rather big uplift to what we have had recently.

Plus a sustainable defence budget run properly, without Successor making a hole in it.

Isnt a deal for Mistral up for discussion as well?

The same problem. Who would crew them ?

Government policy dictates all complex warships to be built in UK. No compromise, so no deals to be done.

The Australians considered (briefly) the possibility of operating F35b’s from their Canberra class LPD’s but decided against it because of the expense and complexities of incorporating the aircraft into the ships complements. The ship would need new fuel lines & storage facilities, new radar systems,additional logistic and engineering support, hanger changes, instrument landing systems, and all that’s before you get to fortifying the deck with heat resistant materials, and specialist training for the pilots and maintainers. There has already been problems with the Canberra class before all this. Although if the will was there I am sure it could be… Read more »

And here is that source.

[…] Japan is officially drawing up plans to acquire the F-35B, according to local media. The Yomiuri Shimbun, a Japanese newspaper, said that Shinzo Abe’s administration “is planning to indicate the number of [F-35B] aircraft to be procured in the next Medium Term Defense Program, which is to be compiled at the end of this year.” The story went on to report that the Abe government is “mulling including related expenses in the fiscal 2019 budget plan, with a view to starting the delivery of F-35Bs from around fiscal 2024.” The article also notes the F-35B would be the perfect aircraft if Japan wanted to… Read more »

It could only be good news from a UK perspective for another big country to adopt the B variant because it would be another voice interested in getting stuff into the B’s shorter internal weapons bay, maybe conformal and/or stealthy(ish) drop tanks and other stuff to increase range, etc, etc. The more people in the F-35B camp the more development attention it is likely to get.

The Spanish and Italians will order another 50 f35b between them at least those harriers won’t fly forevr.

This must be wrong. I was under impression that you couldn’t possibly operate F35bs from any ship less than 70000 tons.Perhaps a ship of that size would have a built-in amphibious capability,no?

The Italians plan to use the F35B from the Cavour and possibly their planned LHA, both ships displace about 30,000 tons.

[…] As we reported recently, before this March 20th confirmation, conversion of the existing Izumu class helicopter carriers was rumoured as an option for the F-35Bs Japan wants to purchase. […]

[…] As we reported recently, before this March 20th confirmation, conversion of the existing Izumu class helicopter carriers was rumoured as an option for the F-35Bs Japan wants to purchase. […]

[…] As we reported recently, before this March 20th confirmation, conversion of the existing Izumo class helicopter carriers was rumoured as an option for the F-35Bs Japan wants to purchase. […]

HMS Argyll and allies search for submarines in the Philippine Sea

[…] offensive military operations, although it’s hard to see how that distinction can be made. As we reported recently, before this March 20th confirmation, conversion of the existing Izumo class helicopter carriers […] 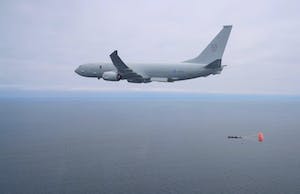