An AN-124 cargo aircraft touched down at Glasgow Prestwick Airport to deliver the second Operational Flight Trainer to be based at RAF Lossiemouth.

The Royal Air Force say here that the simulator is one of two being installed in a £100-million strategic facility built by Boeing Defence UK and Scottish firm Robertson Construction.

“It was offloaded from the specially chartered Antonov AN-124, which took off from Tampa, Florida and is being transported by road to Lossiemouth, where it is due to arrive late on Friday evening. The simulators and facility managed by Defence Equipment and Support (DE&S) are part of a £470m UK Government investment in the coastal RAF base in Moray, north-east Scotland.”

Mark Corden, Project Manager for Training in the Poseidon delivery team at DE&S, was quoted as saying:

“The simulators will provide specialist training for RAF pilots who will be flying the Poseidon MRA Mk 1.  They are exact replicas of the aircraft cockpit and will incorporate very high-definition visual display systems to enhance the training benefit.  They are also designed to link up with the mission simulators used by the rear crew, allowing them to train together.”

I guess it is cheaper to make the last leg by road rather than fly direct to Lossimouth.

Guess there’s a reason it didn’t come by sea. Must be an expensive way of doing it though.

God yes I’d not thought of that angle either…!

looking at the flat bed loads they would not fit in standard shipping containers. Which would mean some form of specialist shipping I would suppose.

It maybe the case that the civilian AN124 is not covered to land at a military base .

Possibly, though I did see one at Brize back in 2014. I was told it had been impounded there.

I’ve certainly seen one at Yeovilton some years ago, I think they were taking some helos to Afghanistan.

I do remember seeing one as well.

I saw one swallow up a Nimrod fuselage at Kinloss. No probs landing one there!

Most probably taken through Prestwick as it has to be processed through customs (AFAIK there is no freight customs or lareg freight handling at Lossie). Its far easier, safer and more secure to move via cargo plane as opposed to boxing it up in a sereis of shipping containers and taking a sea route. £100m sounds about right for a flight trainer, they are pretty incredible pieces of kit and far cheaper and more effective to run than a lot of “live” training using a real aircraft.

“£100m sounds about right for a flight trainer”

Really AL. Wow. It is comparable to much front line equipment.

I always try to look beyond mere numbers and at capability overall but always surprised by the sheer cost of the tail end of defence, such as this.

Daniele, the capabilities of the full motion driver training aids for AJAX are impressive (as is the cost).

Thanks Ian. On the army side of things I was aware of CATT at Warminster and Sennelager but not this.

These are the first aircraft style 6 DOF trainers that the Army has had.

The article doesn’t actually say £100m for the flight trainer though, it says, quoting from the linked RAF release, “the simulator is one of two being installed in a £100-million strategic facility built by Boeing Defence UK and Scottish firm Robertson Construction” so at most that would be £50m per simulator because there are 2 but I assume it is actually quite a lot less than that since the cost of that “£100-million strategic facility” presumably includes building costs and everything else apart from the 2 simulators that is going to go into that facility. The RAF article actually lists… Read more »

Yes that’s right. My reaction is still the same at the costs vs say a T31 or, what did we pay in TOBA for the RB2s, was it 150 million?

Seems similar to the facility John above highlighted for the Aussies.

When the facilities at Corsham cost I recall over 600 million I should not be surprised, but always am.

Lossie is also 50M shorter than the An-124 max landing distance at maximum landing weight. I doubt the sim comes close to Mac weight but landing at preset wick gives them more leeway.
I’m not airline pilot but with £100M in the back I’d take the leeway.

It’s a worthwhile investment. For training, SIMs are much cheaper to operate than a real asset. Especially if some trainee crashes it 🙂

You might find this interesting, this is the P-8A training facility at RAAF Base Edinburgh, South Australia:

Some more info on the RAAF P-8A Poseidon training facility:

You can get an XBox Series X and gamepass for a few hundred quid and that’s going to have Flight Simulator on it in a month or so.

Top saving tip, don’t tell the minister of state he will be on the saving in a moment.

If you want realistic flight models stick with a PC/Mac and X-Plane 11. FS2020 does look pretty though.

Can these be used for E-7 Wedgetail crew as well or will they have their own sim?

I would think not.

Here in Australia both have their own separate simulators, the E-7A is based near Newcastle in New South Wales and the P-8A is based near Adelaide in South Australia, 1,500km apart.

From a purely pilot point of view they would be similar aircraft to fly, but that’s pretty much where it would end.

Yea. I’m sure that giant antenna atop the E-7A makes it a very unique 737 to fly.

Bit ironic really﻿ 😀 ﻿ If this was a Russian aircraft delivering kit to train crews to hunt Russian subs. 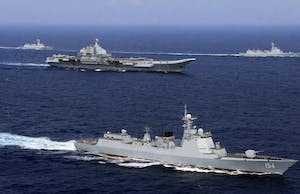