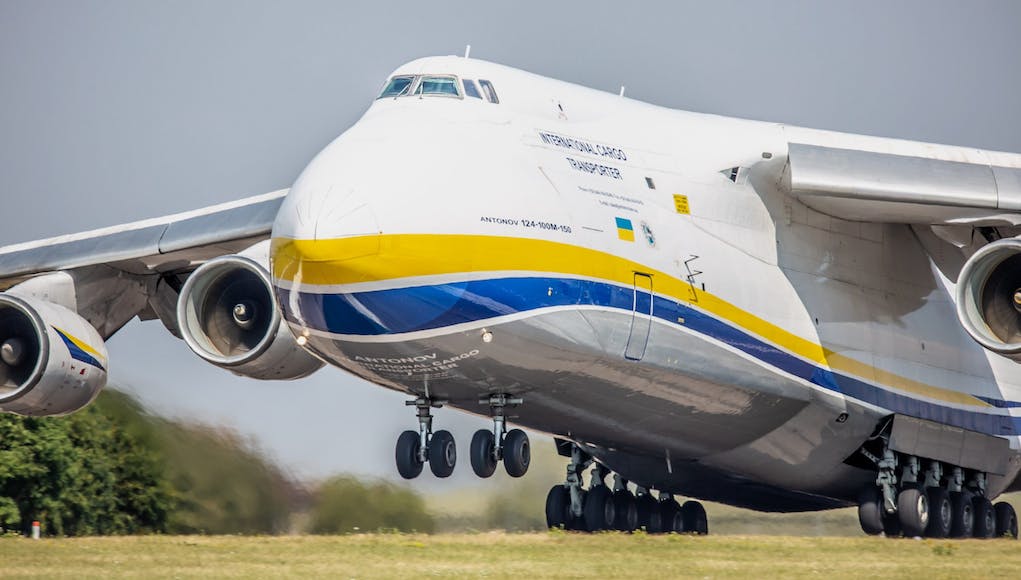 The Antonov An-124 is a large, strategic airlift, four-engined aircraft that was designed in the 1980s by the Antonov design bureau in Ukraine, then part of the Soviet Union.

Quick Response is designed to test of EUFOR’s operational capability, deploying ‘over the horizon’ reserve forces, and the effectiveness of contingency plans to ensure EUFOR’s ability to fulfil its mandate under UN Security Council Resolution 2496 (2019) at all times. You can read more about the role of EUFOR here.

According to the Ministry of Defence, soldiers from The British Army’s Parachute Regiment landed with their payload of food and equipment on-board a Royal Air Force C130-J Hercules.

“Having spent the last 2 weeks in COVID isolation in the UK and a medical screening at Camp Butmir, they quickly got straight to work unloading specialist vehicles such as the Foxhound Light Armoured Vehicle, from the giant Antonov AN-124.”

“Exercise Quick Response 2020 is an amazing opportunity for EUFOR’s reserve forces to work with the authorities and law enforcement agencies of BiH first hand. Clearly COVID-19 will present challenges and limitations but it will not prevent EUFOR from showing how important it is to integrate fully with the people of BiH.”

Just because “Brexit means Brexit” doesn’t mean we should divest ourselves of operating with EU forces.

Hence why I asked 🙂

Brexit is about leaving the EU not NATO. Most Brexiteers are actually pro-NATO as they know it was that organisation thats kept peace in Europe.
Whereas the EU is about undermining the transatlantic alliance by building an EU military that, as Macron said “can rival Russia or America”.

Yes Pete, and after hundreds of years of conflict ending in a European civil war that tore the continent apart, you could say about time too! The EU, with all its problems, is good news for European stability and world peace.

Ridiculous.
The EU couldn’t even stop the wars in the balkans, NATO had to step in. It actually provoked the current war in Ukraine by making overtures for the Ukraine to join the EU, something Russia will never allow.

NATO prevents war amongst its members, as the attacked member can appeal for support under article 5. Why do you think there’s been no more hostilities between Greece and Turkey, both NATO members?

How could the EU have stopped it? The EU is currently not a military organisation, its a trading block.

NATO however is made up of the main EU nations.

Yes Sean, same old jaundiced views of the EU….As far as Greece and Turkey are concerned, just watch this space.

Agreed, its short cuts like this that result in a mess if and when things are needed in a hurry. You would also think it would have been cheaper to use military owned assets like the c13s, but guess not or they weren’t’ available.

I think even in a future ’emergency’ the plan will be to charter commercial ships and aircraft to transport military equipment on a large scale. There is no way the military good afford the capacity when it will sit idol 90% of the time.

Cheaper to hire in support than put hours on our precious few C17s. Do it in one load instead of two!

Agree its cheaper for a non distress / long planned exercise. Its the abilty to respond ‘rapidly’ i question. Unless UK inc has negotiated a long term call-off access agreement then it is likely that in any real commercial world environment that the spot charter $rate for such aircraft in a global emergency would have several digits per day… With a high risk that other actors may simply charter the aircraft to dilute abilty to respond. Ho hum.

Cue reprise of discussion regarding delivery of the P8 simulator

13 replies yet only HF’s readable?!

Wow, that is some cull by the Mods!

I’ve noticed that posts go missing on occasions. I’m sure it isn’t about moderation issues….

If it was, I’m sorry to have missed it. Must have been some barney!