Home Air Apache and Wildcat helicopters team up in Arctic 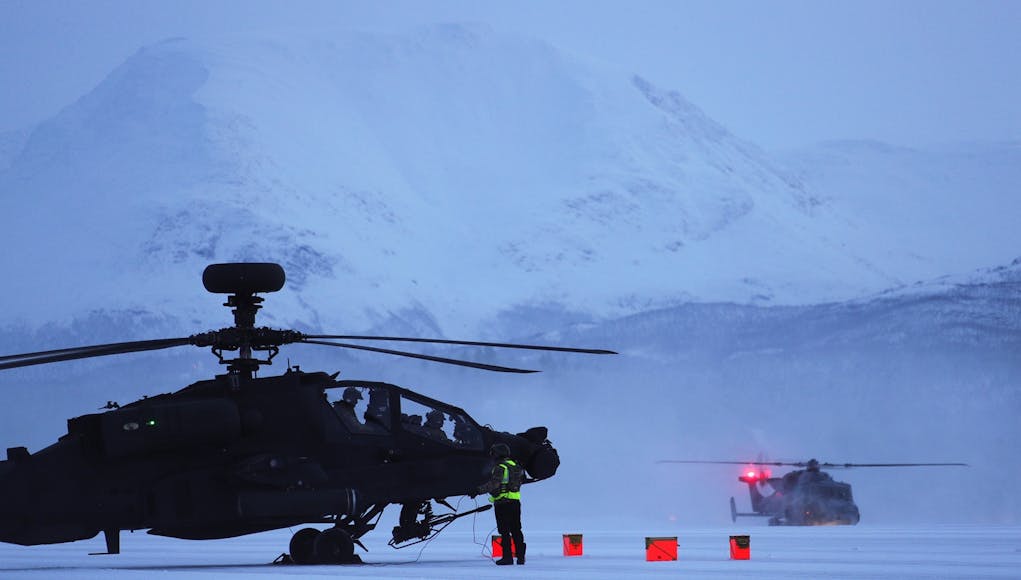 The Wildcat squadron has been in Norway since January as part of the annual Exercise Clockwork, with Apache helicopters recently joining.

“It is the first time the Apaches, of 4 Regiment Army Air Corps’ 656 Squadron, have worked in the region and their six weeks at Bardufoss air station gave 847 NAS the chance to test the capabilities of a class of aircraft they have never worked with before.

Both were put through their paces, learning to operate effectively and safely in the harsh, icy conditions of Norway, where temperatures can reach -30C.”

Pilot Lieutenant Mark Hanson is in Norway for the first time. The 29-year-old said:

“It has been really good out here and thanks to the engineers, we have been able to do lots of flying.

The environmental qualifications see us do mountain flying, snow landings and allows us to get used to the pressures of operating in a cold environment. The weather is a big factor and the first few times flying in the snow is a little disorientating.

“We do prepare in the UK with simulators but there is only so much you can do. A lot of it is learning once you’re out here and in the environment for real. One of the challenges I have found is recirculation when landing because the snow limits visibility. That is why the Aircrewman are invaluable in helping us.”

Uh, that term aviators again. So American to my mind? What is wrong with pilots? Unless it is meant as supporting personnel too?

Differentiates Air Force and Army from Navy and Marine Corps. Does it cause confusion? Yes. Is it sometimes annoying? Also yes. Does it build esprit de corps and therefore enhance efficiency? Yes to that to.
Different services should build their own traditions. It makes them feel more like home.

Agree with regards to your services.

From a British context seems weird to me. I have been reading military material for decades and it is not a term I once read concerning the British military. It seems to have crept into use on recent times.

We shall be reading of “Battle of Britain Aviators” next!

But no issue with the term otherwise.

IMHO, “aviators,” which includes pilots, does not mean them exclusively. There’s the door gunner, the loadmaster, the gunner in the Apache, etc. These too, would be considered “aviators.”