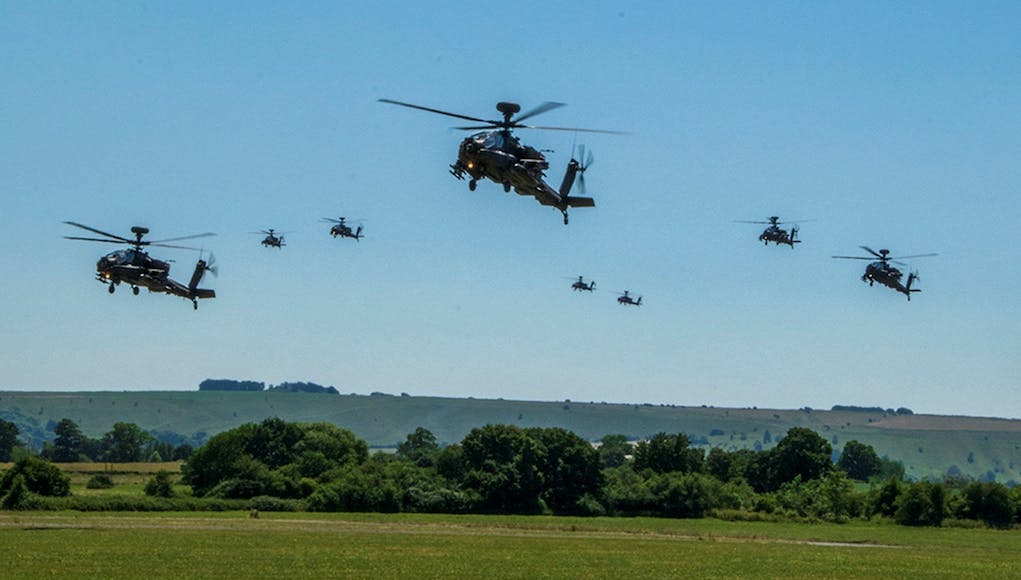 British Army aviators have demonstrated the range and power of the punch their Apache attack helicopters can deliver.

According to a press release, Exercise Talon Gravis has seen 3 Regiment Army Air Corps (3 Regt AAC) launch formations of up to eight Apaches from their base at Wattisham Flying Station in Suffolk to find and strike targets on land and at sea more than 300 miles away.

“Flying against simulated enemy air defences, missions have ranged from a daylight attack on shipping in the English Channel off Plymouth to hunting armoured vehicles on Salisbury Plain under the cover of darkness.

The Apaches were replenished at a Forward Arming and Refuelling Point (FARP) – the military equivalent of a Formula 1 pit stop – set up at Keevil airfield on Salisbury Plain.”

“On its own, a single Apache is a very complex and capable aircraft to operate; the more aircraft that are flying on a mission brings more complexity but also more capability.

This has been challenging training that has tested the full range of the Regiment’s skills, from mission planning and command to ground crew maintaining Apaches in the field.

I am hugely impressed by how everyone has pulled together to provide a powerful demonstration of our ability to operate in mass against deep targets by day and night.”

3 Regt AAC’s role is to provide an aviation deep manoeuvre battlegroup – made up of attack, reconnaissance and transport helicopters – to 3rd (UK) Division, the British Army’s high readiness division.

entire fleet in one pic… ?

it was a joke you biff. and besides, if you think all 64 we have are serviceable you’re in for a shock.

you must be a civilian.

I know that Apache is a good platform, but how realistic are these training scenario’s ? Could a helo actually attack shipping that has any sort of air defence system, could it operate over a battlefield full of MANPAD sams ? I know it has an elint defence capability, but how survivable is it in full scale warfare ?

Not very. But and this is a very significant but no single weapon system is survivable on it’s own. Hence combined arms warfare. The difference is between poking the enemy one of your fingers or smashing their face in with your fist. That requires everything you have not one piece. In the end there is very little difference between that and military equipment.

I know it’s horses for courses but we do have limited money and if speed is the name of the game then boxer plus apache is probably the way to go.

And lacking real firepower and active protection.
If we do get more budget (being hopeful), RN and RAF come first for me, but it would also be good to see 50 more Apache and extra firepower for Ajax and Boxers to make up for our low number of main battle tanks.

I do fundamentally believe we need a two force structure. One wheeled (light) and one tracked (heavy) The light is the quick reactionary to hold the line and carry out interdiction behind enemy lines whilst the heavy is the fist that catches up. I think the light force should be built around the adaptable Boxer vehicle. It should mount the CTAI 40mm as standard, but also have versions equipped with ASTGM, SAM, 155mm AGS, MLRS, Mortar, Battle field surveillance radar, ambulance, recovery, engineering support, communications support and command vehicle. It’s probable too big for a light reconnaissance vehicle so you’d… Read more »

Challenger won’t be replaced. For a lot of reasons. The only reason we still have them is the same reason it was well into the 30’s before we were spending more money on petrol than on horse feed. Cavalry officers !

Seems to me that both tracked and wheeled options provide flexibility. If there’s access to roads or reasonably solid surface that’s not heavily defended with mines, IEDs, ATMs etc then wheels provide fast mobility. However if facing the above and/or heavy snow/other heavily degraded road/surface conditions, then the greater ability for cross country maneuver with less certain direction of travel would seem to favor tracked.

If an enemy knows you’re locked into one or other form of transport then it seems to me it makes their job in countering much easier.

8 of these flew over my house on their way…
What a noise, what a sight.
Very low level..very impressive

Andrew, I live in Pontypool just on the eastern boundary of the Brecon Beacons National Park. We do not seen anything like we used to see back in the 70s 80s and 90s, but we still see some aircraft low flying here. Yesterday we had 6 Merlins fly low over here. This year we have seen around 10 Apaches, 20 + Merlins, Wildcats, Chinooks, Typhoons, Tornados, Hawks, C-130s, E-3D Sentry AWACS, A400Ms and C17s, Hawks and the BBMF plus a shed load of NATO aircraft. It’s fantastic looking down of these aircraft, we once saw two Vulcan Bombers on the… Read more »

I’m not ready to give up our tanks yet Pacman, but you make a valid point regards Apache. Because we are buying lots straight from US Army production we are getting a great price. Now I am a patriotic sort of person and would love to see equipment being built here. But, we have a small defence budget and big ideas, so for me getting the right equipment to our services at the right time and on budget is simply more important today. I would be happy to give the Army’s Wildcats to the RN and replace them with 34… Read more »

The challenge is trying to map out what types of realistic warfare we are likely to tackle in the next 20 years and putting aside the warfare that we are just doing for looks. The obvious is to focus on Russia, but a war with Russia is not realistic and would have to involve a large number of allies, including the US, at which point our forces are just playing support role and so doesn’t really matter what we bring or don’t bring. Counter insurgency is the next guess, for this you need troop numbers and bombers. The question here… Read more »

I agree that drawing up lists of equipment without considering scenarios is a component that seems to be lacking in this forum but I’m going to put out a counter scenario on Russia. Assume the US does not get involved in Europe as you assume regardless of Article 5. It may be unthinkable and highly unlikely but is it impossible? We have both WW1 and WW2 to show that it took a lot before the US formally entered those wars, including in WW2 a direct attack on them by Japan and a declaration of war by Germany, and it was… Read more »

Well I would pin that photo in the officers mess of every MBT regt in the British army. Because in the event of a peer level conflict it (attack helicopters) would be the last thing on earth they would ever see.