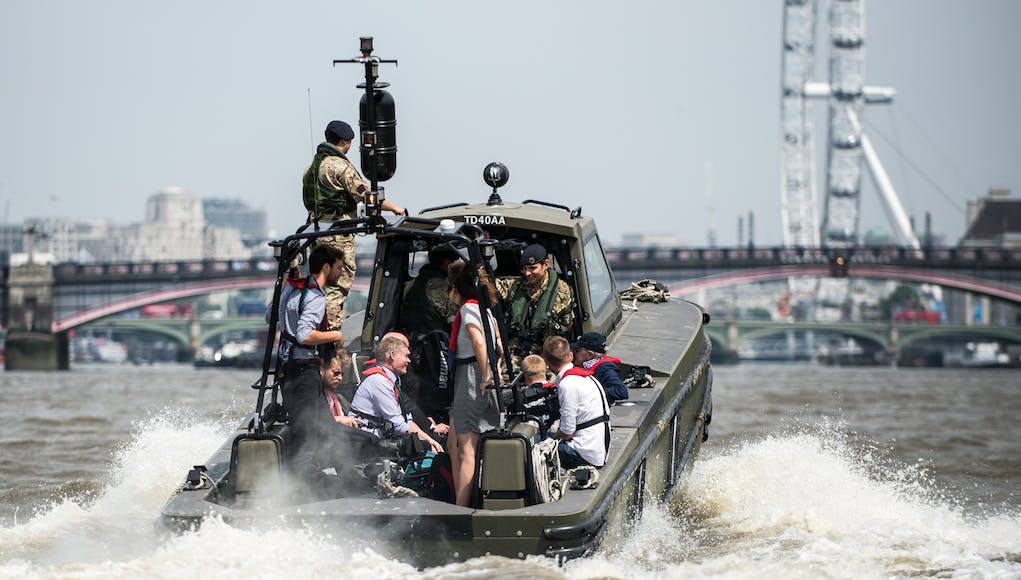 History and technology combined on the Thames in London when the British Army’s Royal Engineers took to the water to support the world’s oldest boat race.

The soldiers, in a range of military waterborne craft – support vessels and rigid raiders – used the Doggett’s Coat and Badge rowing race to practise their real life navigation, safety and recovery skills, as they provided marine support to the colourful spectacle.

Six apprentice watermen of the River Thames compete annually for the the Doggett’s Coat and Badge rowing race, and this prestigious honour has been held every year since 1715 between London Bridge and Cadogan Pier, Chelsea, passing under a total of eleven bridges en route. Originally, it was raced every 1 August against the outgoing (falling or ebb) tide, in the boats used in the past by watermen to ferry passengers across the Thames in the days when London’s bridges were fewer and the fastest way to get around town was on the water. Today it is raced at a date and time in late July that coincides with the incoming (rising or flood) tide, in contemporary single sculling boats. The winner’s prize is a traditional watermen’s red coat with a silver badge added, displaying the horse of the House of Hanover and the word “Liberty”, in honour of the accession of George I to the throne.  Winning Doggett’s Coat and Badge in the 18th and 19th centuries would help attract more trade to the talented waterman. While this is no longer the case, winning the Doggett’s Coat and Badge is still seen as very prestigious to this day and the cmpetition is hotly contested.

Safety is paramount on the race, and the Thames being one of the busiest rivers in the World, is a challenging arena.  The Royal Engineers had to have an excellent grasp of currents, tides, moorings and be able to negotiate traffic while manouevring their vessels as they monitored and oversaw the race.  Several of the Army boats also carried judges and safety staff from the Fishmongers’ Company who sponsor the race.

While the colourful event in brilliant summer sunshine looked fun, there was a serious side. The Royal Engineers form part of the UK’s resilience capability, ready to step in and support the civil power in time of need.  It is vital that their skills are kept sharp and well practised in case they are needed on our inland waterways in the near future. The race provided the perfect conditions for testing the soldiers’ capabilities in boat handling in a busy, unpredictable environment.

“Events such as these allow us to test a range of skills in real life scenarios, under pressure, and in real time, which ordinary training can’t completely simulate.  It is a fun day for the guys, but they’re working hard to do the best for the organisers and competitors, and learning and improving on the military operational side as they go.  It’s a win win.”

Secretary General: As the world changes NATO will continue to change