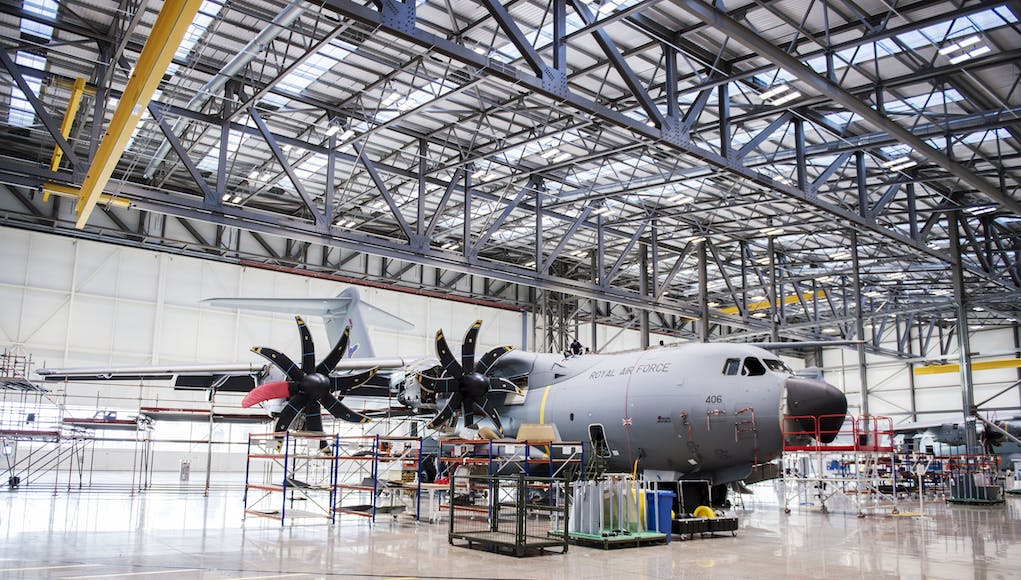 The Atlas maintenance, repair and overhaul facility, which covers 24,000 metres squared and is 28 metres high, is now fitted out and fully operational in support of RAF transport operations all over the world.

“From deploying troops and armoured vehicles to a war zone, to getting vital support to humanitarian disasters, our Atlas fleet plays a global role and it needs a home to match.

This huge hangar provides exactly that, and will see Brize Norton ready our Atlas fleet for action wherever they are needed in the world.”

The hangar was built under Defence Infrastructure Organisation contracts and has cost approximately £70 million including fit-out work, with activity on the facility ramping up since late 2016 when it was handed to Defence Equipment and Support, the MOD’s procurement organisation. 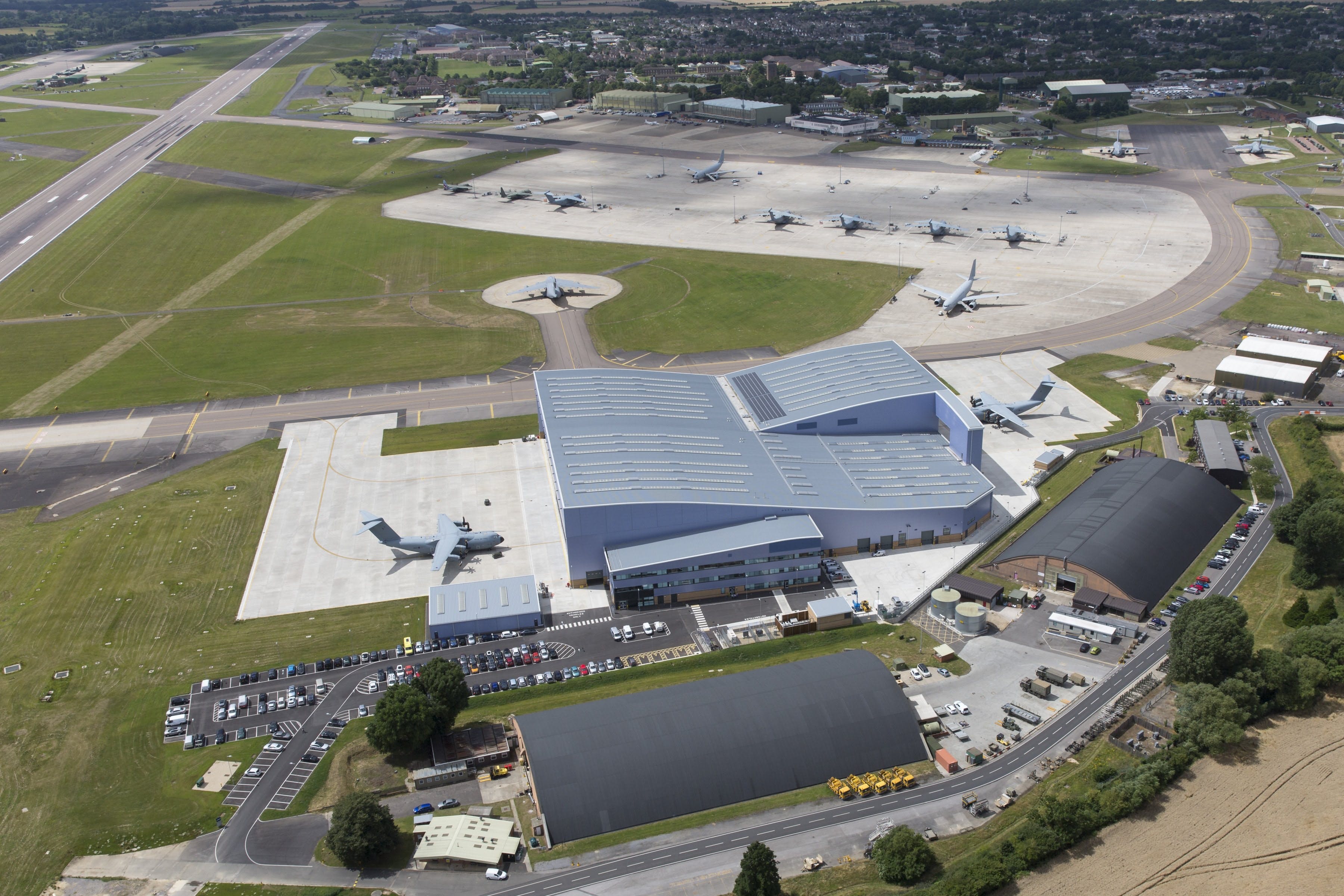 The hangar is designed to make Atlas maintenance easier, safer and more efficient. The internal layout is the result of extensive feedback from support delivery teams and has been designed to be highly adaptable with easy access to specialist tools and equipment.

Support for the UK’s Atlas fleet is enabled through a £410 million agreement between DE&S and Airbus Defence and Space – part of the UK’s ongoing commitment to the Atlas programme which is sustaining 8,000 jobs across the national supply chain.

“The Atlas programme is delivering a world-class fleet for the RAF, offering the UK next-generation transport and airlift abilities for operations all over the world.

Expert support on the ground in the UK is an essential part of that capability and this new facility will ensure that work continues for decades to come.”

The aircraft can carry up to 37 tonnes over a range of 2,000 nautical miles. It is able to deploy troops and equipment between and within theatres of operation either by parachute or by landing on short, potentially unprepared airstrips.

Atlas can also carry armoured vehicles, drastically reducing the time it takes for a deploying force to be ready to fight. For humanitarian roles, it is capable of deploying mobile cranes, excavators and large dump trucks for disaster relief operations– for example clearing earthquake sites. 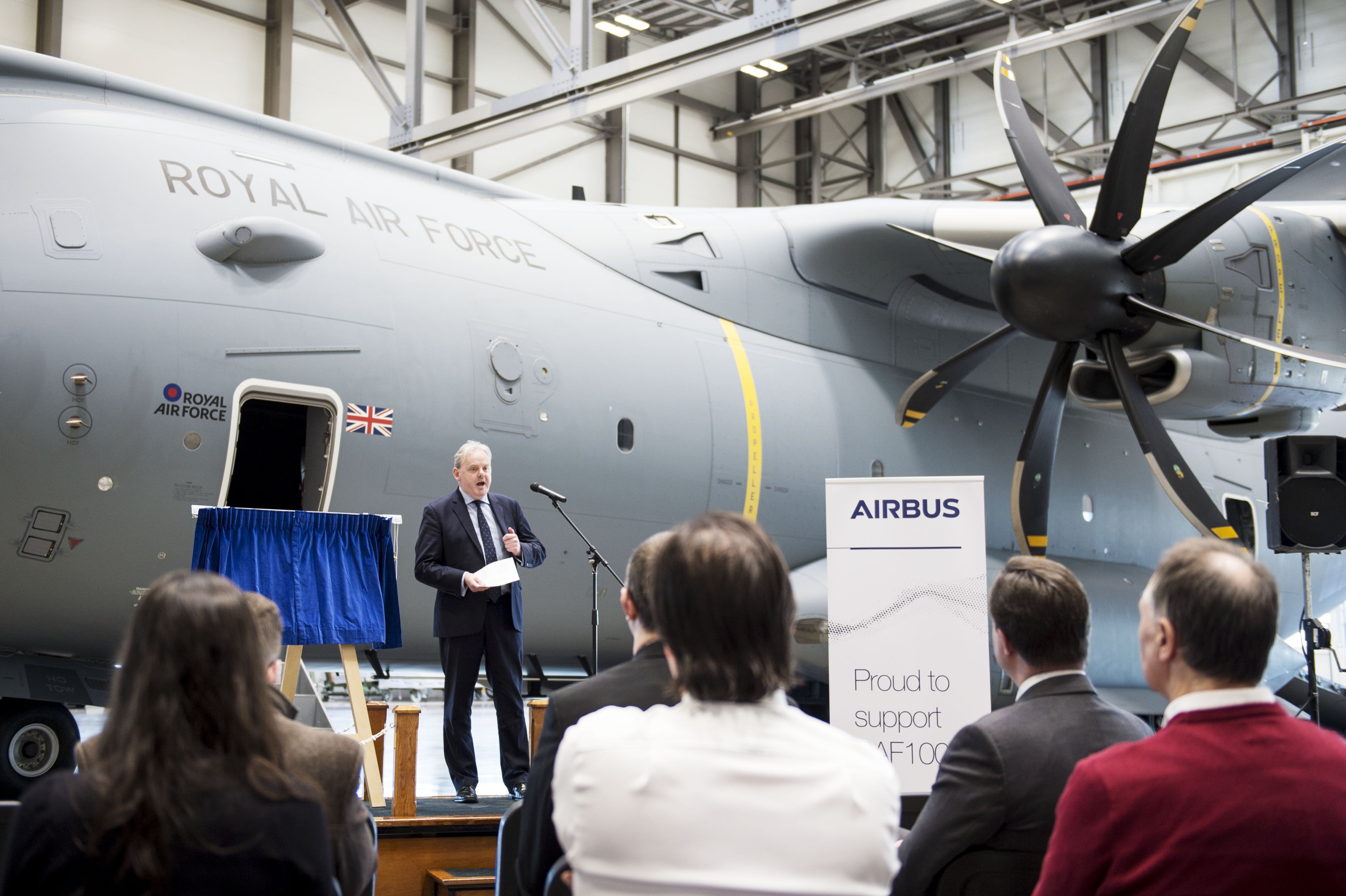 “This new hangar provides us with a world-class maintenance facility to match the world-beating capability of the Atlas aircraft.”

The UK has ordered 22 Atlas aircraft for the RAF, 18 of which have been delivered. The entire fleet is due to be delivered by 2022.

Atlas aircraft are really making their presence felt now. The UK have invested strongly in heavy lift capability in recent years which is why the French are having to rely on RAF aircraft in their ops in Mali. The French have failed to invest properly in transport aircraft.

A400 is medium lift. Our C17s are what give us heavy lift,which is what the French dont have. The French have the A400.

Why can’t the French buy there bleeding own heavy lifters?

the French operate a400 too. what they lack is special forces transport and very heavy strategic lift (c15.) they have a joint Hercules force with the Luftwaffe to fulfill the SF role. They also lack heavy lift choppers, hence our offers of chinook

Am I completely wrong in thinking military aircraft live indoors when not in use?
Parking such complex and expensive equipment just feels wrong somehow.

Not enough HAS to go round for all the Fast Jet fleet. Typhoons of the OCU use the ramp. And no way will 50 odd transports and tankers at Brize be undercover at the same time!

I feel that all fast jets should be in HAS though so agree with that.

Great photo of the hangar. Situated next to the old TCW hangar and Offices. Brize is fast running out of space to house these Sqn’s with Base hangar for the old VC10’s and the new hangar for 99 sqn C17’s. was based at Brize fm 1989 to 2001 good times

The problem with placing all your eggs in one basket is, if Brize suffers an incident on the runway, then all virtually Military transport flights are grounded. Getting rid of RAF Lyneham was such a huge mistake. I mean it wasn’t a a Master Diversion Airfield for nothing.(it was one of the primary airfields to which aircraft could divert in the eventuality of their home bases being closed due to weather, or other unforeseen events such as aircraft crashes.) But hey another tick in the box of this disgraceful government.

Don’t all branches of the military have multiple plans for relocation of staff and assets in times of problems? It would seem a pretty standard thing to think about even if it means using local friendly allied bases for short periods.

Sure they do, but that is with time to disperse with warning of a threat. I think farouk was pointing out a scenario where there is no warning leaving assets stranded. But this could apply to so many areas of defence as the military has reduced so much it makes sense, economically at least, to co locate assets from certain roles. This is happening already with all services. While Brize has one of the longest runways in the Uk if I recall, along with Macrihanish and Boscombe Down, it has but one. Not ideal for the entire AT and AAR… Read more »

Really puts into perspective how big things are with how huge that hanger needs to be just to house three of those planes.

But how does it compare to the other huge hanger built for the Voyagers?
Or even the one at Waddington for the Sentry’s?

I keep on saying this – but surely mildenhall is a prime site for the RAF to take over – not only is it a great facility it is near a load of training areas and could help form the nucleus of a super base in the east.

Agree. Close local army bases and put all assets there, with runway for deployment.

Most army barracks are not strategic assets where’s port facilities and airfields are.

Its also currently the USAF lift centre for Europe so I imagine it has these kind of facilities already.

Barking mad to let something this good go to waste – especially when there are a lot of really substandard MOD bases out there.

Well the bases plan was already released Pacman and MoD will be closing over 60 sites. Relocation of what is in these current sites has not yet been released.

Although it may save money long term in short term in many cases there is a large upfront cost of relocation. Also some things simply cannot be moved or the cost would be too prohibitive.

‘Lift’ seems one of the few areas in defence where we seem to have it close to right. Light, medium and heavy mix looks good as does supporting infra.

Would only need a nudge rather than a heave to bring us to 1 full C-17 Sqd and 2 x A400. Hope we will extend A400 order accordingly but shan’t hold my breath.