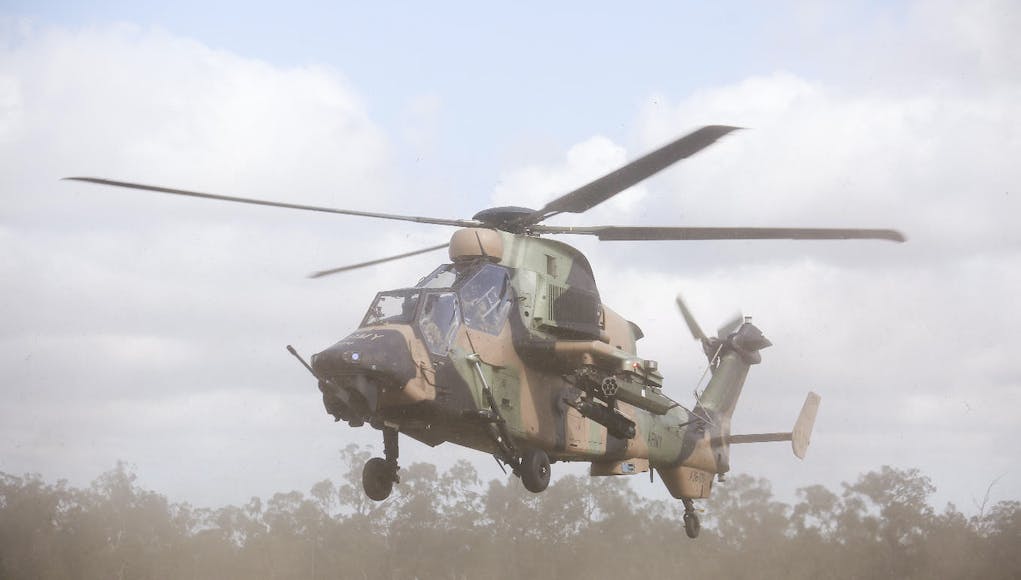 Three contenders have made themselves known including Airbus Helicopters, Textron subsidiary Bell and Boeing.

Airbus Helicopters is marketing its Tiger Mk3 as the ‘Tiger platform beyond 2020’. Boeing is pitching local industrial workshare as it promotes its AH-64E Apache. Bell is offering up the AH-1Z Viper, a marinised platform designed for amphibious operations and used by the U.S. Marine Corps and a few other nations.

Bell with the AH-1Z Viper and Boeing with the AH-64E Apache confirmed that they’re pitching for Australia’s LAND4503 attack helicopter program, while Airbus says A$3b will be saved by persisting with the Tiger in upgraded form pic.twitter.com/SAVpHu64F6

Each offering represents a mature platform which is something sought under the RFI.

“The acquisition strategy aims to reduce operational and in-service risk, and to allow the Australian Army to rapidly achieve operational milestones for the replacement armed reconnaissance capability, whilst achieving value for money,” the RFI states.

I would imagine that the Apache is by far the front runner. But interesting comments by Bell suggesting that marinization is more than corrosion protection!

But note the requirement is for armed reconnaissance – even the US Army plans to replace the Apache in that role within a few years as the first priority in their helicopter replacement. Apache is a big noisy attack helicopter not quiet and slim like the Tiger,

The Bell Viper and Apache are very close in their performances i.e. slow, but the Apache is more capable than the Viper. The Viper can now fit a forward facing longbow radar pod to a weapon’s hardpoint. The Apache fits it above the rotor mast and gives it a 360 degree view and still keeps all its hardpoints for weapons. The Apache E has been “marinised” from lessons learned from our D models operating from Ocean etc.

Actually the requirement is three fold: Reconnaissance, attack and security. And it places emphasis on the ability to operate from ships.

The Aussies train with the USMC stationed in Darwin together with their Viper Helos, so there is familiarity with this machine. In addition the Viper uses the same engine as the MRH-90 Taipan that the ADF also currently use. With the ADF 2RAR looking to transition to an amphibious force, utilising the LHDs, there is a strong case for the Viper as a proven maritime attack/recon helo and commonality with the USMC in the region. For the Apache, there is a strength in the numbers of allies using this platform, and a support path through the next decade at least.… Read more »

Have their Tigers been that much of problem in service? It only seems like yesterday when they procured them. I was surprised to see that they are looking at a replacement already.

The Aussies had 22 delivered in 2011, however after numerous significant issues and additional major expenditure, the Tiger only achieved FOC in 2016. Its first overseas deployment was to Malaysia in 2019. In 2016 Australian National Audit Office (ANAO) report found the FOC milestone lacked definition, because the Australian Army amending its acceptance to accommodate 9 prominent caveats. Earlier in 2013, a report by Australia’s Defence’s Rapid Prototyping, Development and Evaluation (RPDE) organisation found that upgrading the Tiger was a “high-risk activity” and that replacement alternatives should be considered. Therefore one of the key recommendations of the 2016 ANAO report… Read more »

Under the original contract the 22 Tiger’s (or any other had they been chosen) where only meant to fill a 15 year service life before replacement anyway. hat being the case 2011 through to 2026 is the 15 year service life. In regards to the Tigers them selves they have had a very poor start but in the last 18 months or so have really started to improve. Airbus is proposing an upgrade to the existing aircraft plus a few new airframes that would save the ADF $3 billion but still early days and the Tiger is on the nose… Read more »

I’ll be surprised if they don’t just upgrade the tigers to save 3 billion.

How will Airbus source the additional 7 helos (above the existing 22 currently with the ADF) required in the RFP? The line is closed. Secondhand or surplus helos – from whom?

Sounds like an expensive deadend to me if you are remotely correct in what you say.

The Aussies get many things right in their defence procurement, but their achilles heel continues to be helicopters.

Your right there, some major clangers dropped there!

I always thought the Tiger was an odd choice, I would go Apache E every time.

It was bureaucrats. Back in the late 90’s early 2000’s their was a belief amongst those in Canberra to much was being acquired from the US and to diversify. On some aspects this worked out great, Others no better or worse and some just buggered. The ADF had recommended both the Apache and the Blackhawk to be acquired but government ignored and chose differently. Has been also for those past stuff ups that recent governments have taken a more gentle touch in how they decide on defence acquisitions leaving it for the most part upto the ADF.

You would think they would go commonality with the USMC or hit Marignane for a big discount for the pain they have suffered developing the Tiger for airbus.