B-2A Spirit stealth bombers from the US Air Force’s 509th Bomber Wing were deployed on a long-planned mission of the ‘Bomber Task Force’, representing its first forward operation from Iceland.

A 🇺🇸 B-2 Spirit stealth bomber flies alongside @usairforce F-15s and 🇬🇧 @RoyalAirForce Eurofighter Typhoons during a training mission over the #NorthSea. Missions like this help mitigate security risks within the European theater and build relationships with our @NATO Allies. pic.twitter.com/8OyRsh6Qe5

During deployment, the crew and pilots undertook missions introducing them to work in European theatre and European airspace, while refining skills and relationships with NATO allies and regional partners.

On August 25th, a B-2 Spirit flew in formation over the North Sea with F-15C Eagles and F-15E Strike Eagles from the 48th Fighter Wing at Lakenheath. 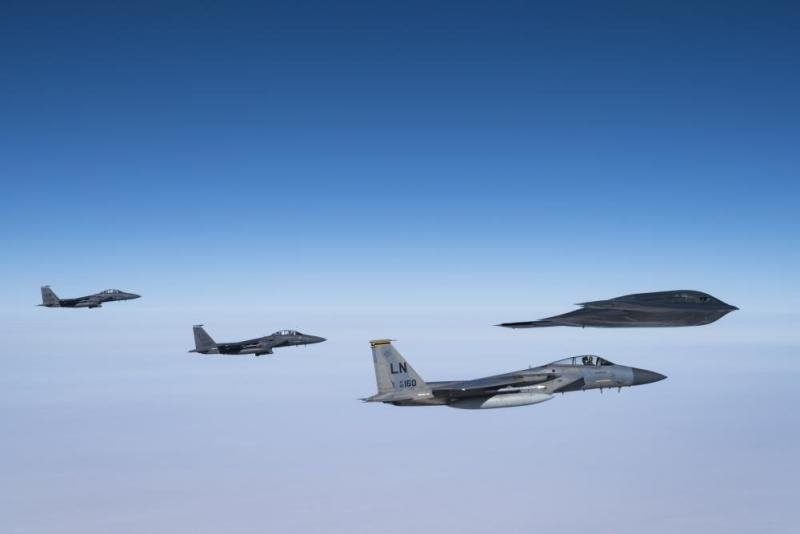 “The stealth bomber then made a low-key approach to Fairford Base on the same night. This clearly highlighted the migratory work that the B-2As and their crews are doing with partners USAFE & AFAFRICA as they are deployed to the BTF mission.”

My wife’s sister in law saw one of these flying around Gloucestershire last week. Must have called in to Fairford. Took a picture and put it on Facebook 🙂

Can anyone confirm why past B-2 visits to the UK always seemed to have obligatory accompaniment by a pair of F-15s from Lakenheath.

Practice escort missions. During real bombing missions (Done at night), the bombers go in alone. After they complete their bombing runs, they fly back to friendly airspace and get escorted to an aerial tanker by American or Allied fighters. The fighters are there to protect the vulnerable tanker and bomber during refueling which might be in daylight.

Yes, I understand and agree with what you say but I was actually thinking more about when the B-2 had not long been revealed to the public. I attended a number of air shows, including RIAT at Fairford, when B-2s would put in brief appearances direct from Whiteman AFB. They were always accompanied by a pair of F-15s from Lakenheath and people used to say that, as the B-2 was “invisible to radar” they were there so the aircraft “was visible to ATC”.

That’s more for the show since the B-2 can turn on a standard IFF for air traffic control. When they leave Whiteman AFB, they have their IFF on.