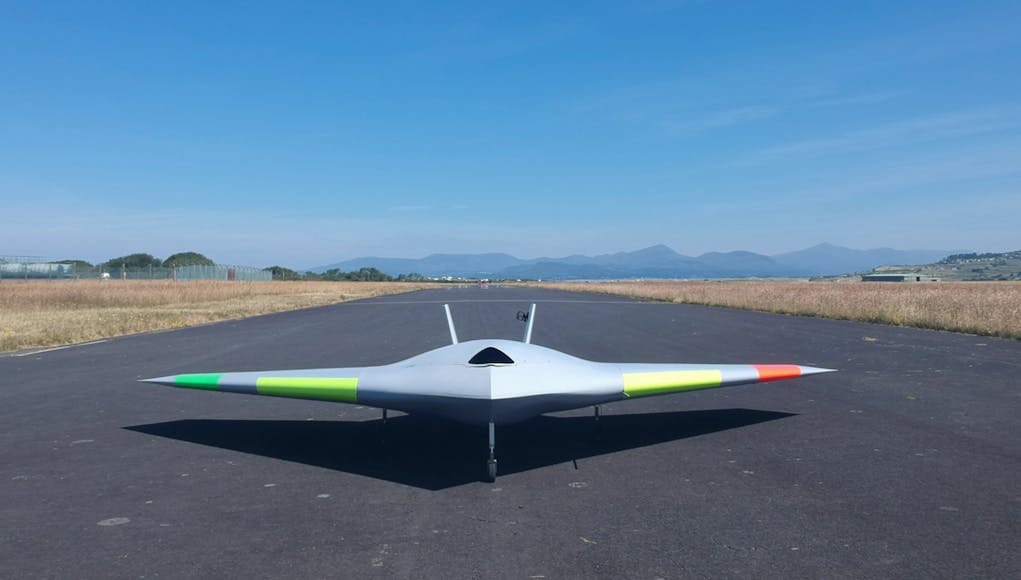 For the first time in aviation history, an aircraft has been manoeuvred in flight using supersonically blown air.

MAGMA, designed and developed by researchers at The University of Manchester in collaboration with engineers from BAE Systems, successfully trialled the two ‘flap-free’ technologies earlier this month at the Llanbedr Airfield say the firm in a release.

“The technologies have been designed to improve the control and performance of aircraft. By replacing moving surfaces with a simpler ‘blown air’ solution, the trials have paved the way for engineers to create better performing aircraft that are lighter, more reliable and cheaper to operate. The technologies could also improve an aircraft’s stealth as they reduce the number of gaps and edges that currently make aircraft more observable on radar.

Developing such technologies helps to ensure the UK has the right technologies and skills in place for the future and could be applied to the development of a Future Combat Air System. It is the latest technological breakthrough to come from a number of BAE Systems collaborations with academia and industry, that will help the UK to deliver more advanced capability, more quickly, and through shared investment.”

“MAGMA is a great example of how collaborating with bright minds at British universities can deliver ground-breaking research and innovation. Our partnership with The University of Manchester has identified cutting-edge technology, in this case flap-free flight, and turned what began as a feasibility study into a proven capability in just a number of months. It demonstrates how STEM can be applied in the real-world and I hope the success of these trials inspires the next generation of much-needed engineers and scientists.”

Bill Crowther, senior academic and leader of the MAGMA project at The University of Manchester, added:

“We are excited to have been part of a long-standing effort to change the way in which aircraft can be controlled, going all the way back to the invention of wing warping by the Wright brothers. It’s been a great project for students to be part of, highlighting that real innovation in engineering is more about finding practical solutions to many hundreds of small technical challenges than having single moments of inspiration.”

The technologies demonstrated in the trials were:

• Wing Circulation Control – Taking air from the aircraft engine and blowing it supersonically through narrow slots around a specially shaped wing tailing edge in order to control the aircraft.

• Fluidic Thrust Vectoring – Controlling the aircraft by blowing air jets inside the nozzle to deflect the exhaust jet and generate a control force.

The trials form part of a long-term collaboration between BAE Systems, academia and the UK government to explore and develop flap-free flight technologies, and the data will be used to inform future research programmes. Other technologies to improve aircraft performance are being explored in collaboration with NATO Science and Technology Organisation say BAE.

Looks good, what happens when the engine is out, I presume auxiliary pump and batteries?

The reason why it may be better suited to UAVs than manned aircraft.

Yes I was thinking the same thing and why I suspect this long considered technology is finally taking a leap forward into real time.

Technology is the key to our future prosperity and we should invest heavily in it.

Building RFA support ship at inflated prices in UK shipyards with little hope of any exports is not.

A good place to start investing and building then?

Does Bombardier in NI have a sustainable future?

Business is constantly changing and evolving.

Failure to change and evolve inevitably leads to failure.

@Nigel Collins And already two potential buyers are showing interest – GKN and Spirit Aerospace. As the report noted the factory in NI supplies other manufacturers apart from Bombardier. Not too sure where Airbus stands on this as I understood they had taken over the Bombardier C Series as the Airbus 200 family.
Difficult times for families in NI and my thoughts are with them and wish them a good result which I am sure will happen.

Can’t help but think that the two factors are not unrelated as prophesied by some at the time of the Bombadier/Airbus agreement to get around US sanctions. If it had a future before, one can’t help but think the convolutions of that deal, probably with a sprinkling of Brexit fears as an added complication, made Bombadier’s involvement in NI deeply problematic. It will be interesting to see where the work moves to. I can see us being further squeezed between Trump/EU manipulations.

we usually do, then spend triple the cost getting the technology back from them

We definitely need to invest in new industries of the future, it is not enough to just talk about it without actually ever setting up any British companies in any of these fields and supporting them. We should set up and support a British company to design and build wind turbines, we in Britain need huge numbers of wind turbines, every single one of them bought from a foreign company. This is an industry of the future and we have precisely nothing in this field (the same as in practically every single other field). We should set up a large… Read more »

Agree that there is a bright future in tech for the UK if we grasp it. Perhaps a dragons den approach to funding would provide better value for public money rather than subsidies. With regards to shipbuilding, you are correct, paying over the odds to make building a few RFAs in the possible is a poor use of funds. However, if the national shipbuilding strategy had any sense, it would have focused on creating modern shipbuilding infrastructure, that could have made a commercially viable venture. Had this been done beginning with the Tide Class QEs & T45s, through the Rivers… Read more »

I’m not knocking their achievement, but! The bold statement made by BAE is not true: “For the first time in aviation history, an aircraft has been manoeuvred in flight using supersonically blown air.” They should look at their own past to discover this statement is rubbish i.e. the Harrier. Yes, the system only worked when the aircraft was in the hover but technically that is still classed as flight because the aircraft is not in contact with the ground. What they should have stated is that for the first time an aircraft has been controlled in forward flight using supersonically… Read more »

There are reports that Taranis has some form of thrust vectoring in its exhaust based on a RR patent.

Blown flaps are a different thing than this. They still require external moving surfaces. This does not. Also Harrier is not the same either I am not sure the air was supersonic and it was not full control through the flight envelope.

Sorry to disagree, but you’re wrong. What BAE/Manchester have done is a further development of blown flaps, the theory behind it is not new. The phenomenon was well understood back in the 50’s after the H126 prototype trials which used blown air through its flight envelope up to 40 knots airspeed, where the conventional controls took over. By re-energising the airflow that had either gone stagnant or detached over the wing would regenerate lift. However, if the airflow over the wing was not balanced one side would develop more lift and thus induce a rolling moment and turn the aircraft.… Read more »

You are confirming what I am saying… Blown flaps are conventional systems that have air injected in order to re-energise the airflow. It was simply a way of controlling airflow over surfaces at low speeds in order to maximise their effectiveness. The system in the article has no such conventional moving surfaces and uses air jets to manoeuvre the aircraft. They are different things that just both happen to use air jets.

You’re missing the point. The Hunting H126 project was used to investigate how blown air over flaps would help reduce the stall speed of a wing. What they also discovered was that at such low speeds the aircraft was capable of, conventional controls were no longer effective (it could fly as slow at 30 knots and even slower when facing a head wind). So someone decided to use some of the compressed air from the engine to change the aircraft’s attitude. They also discovered that the left and right wing blowing had to be proportional or else you’d generate a… Read more »

Look I don’t know the complexities here but I would presume the conventional control surfaces in that vid are predominantly as a safety factor while they investigate the complexities of the technology in the safer environment away from take off and landing? Rather line they used to test early turbojets on Lancs while retaining two of its ?Merlins. As for Bae’s claim is Supersonic the key word here? I think all companies trend to muddy the waters in their claims but I suspect whatever the answer there is likely some aspect of the terms they use that do make it… Read more »

I agree, I’m not knocking what the team have down, just the spin they’ve used by evolving existing tech. A flying wing without some sought of tail is very difficult to control the phenomenon of dutch rolling. This is where the aircraft will roll around the aircraft’s longitudinal axis. The Horten 9 used a variation of wing profile and twist to minimise the problem, but it did not completely go away. The B2 uses active damping, where the flight control system automatically counters the rolling without the pilot’s input. It uses a combination of the split elevons, spoilers and differential… Read more »

Great news, hopefully we put in to use in a British U.A.V.

Whilst it’s a great achievement I would prefer this was kept quiet. We all know hacking takes place why advertise the subject and the targets.

lets just put every detail on the internet? after all the u.k media is a very specialised beast when it comes to disclosing matters on the nations security.

Cheers, thanks for the clarification

I imagine this tech would suit an aircraft with the SABRE engine, for Maneuvering in the upper atmosphere.

Could well be essential I suspect or all but.

I saw a small prototype of this concept in the Manchester Museum a few years ago. Before that date I watched a short report on the B.B.C. on this concept aircraft being flown after special permission had been obtained from the C.A.A. I am glad to see progress is being made so we can give it away to the French.

I wonder if this technology, along with lessons learned from Taranis, will be included in the design of Tempest which seems to be attracting future partnerships from both Leonardo, and now Saab?

Well as I remember during the late 50s 60s Buccaneer and many other aircraft had “blown air wings”???? Also having been at RAF Wittering dyring thd late 60s I’m pretty sure the Harrier had a full 3-axis Blown Air Flight Control System albeit not Supersonic and in the hover. Russian Aircraft developed thrust-vectoring and indeed many Helicopters employ it so this is all very interesting but not exactly new. Also I am sure when I saw a TV bit from Manchester Uni re this project the model they showed definitely had moving control surfaces?? Are these just backup controls on… Read more » 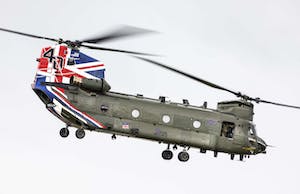