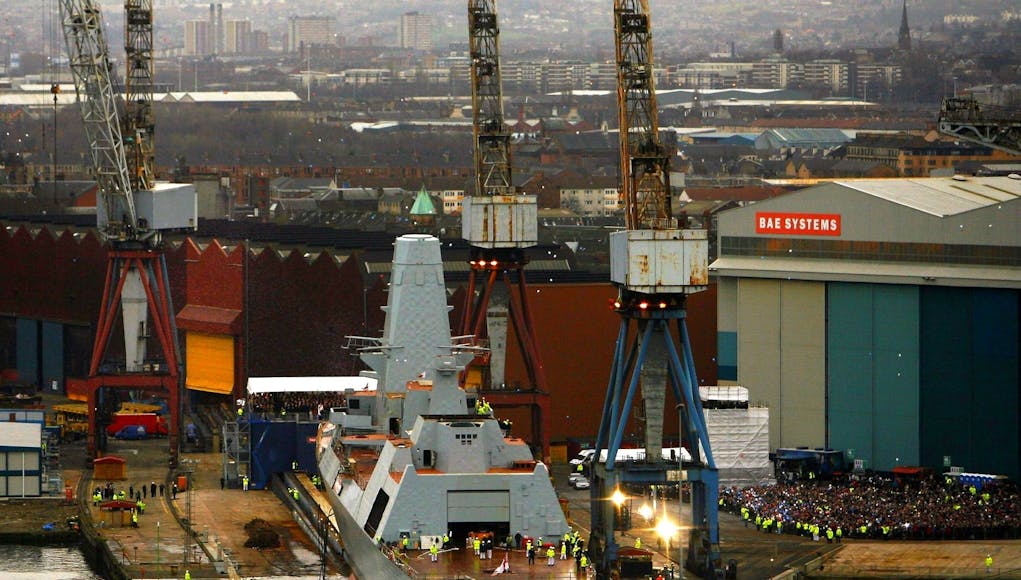 Ian King, chief executive of BAE, has indicated in a letter submitted to the Scottish Affairs Committee that shipyards on the Clyde would likely have to close if Scotland votes for independence.

The future of the yards at Govan and Scotstoun is directly tied into the Type 26 frigates and Mr King has said BAE would build the ships at a location compatible with the contract awarding process of the Ministry of Defence.

The indication comes from a letter submitted to the chairman of the Scottish Affairs Select Committee Ian Davidson, Mr King stated “the major investment decision known as Main Gate, will be made by MoD at the end of this year” after the referendum on 18 September.

Mr King also said that “in the event of a Yes vote, and as we have made clear, we would be required to discuss the future of the Type 26 programme with our customer, the MoD. It would be for the MoD to determine how the vote affects the final decisions they have yet to make on the programme, including the future location of the build of the ships.

We would take our customer’s lead in these circumstances. We cannot determine this outcome in advance, or without the direction of the MoD.”

The MoD has a 15-year Terms of Business Agreement with BAE Systems MNS, giving the company certainty about the UK Government’s commitment to a minimum level of capacity in the areas of warship design and build work, including the Type 26 as mentioned above, and elements of support covering complex warships.

The MoD has a similar 15-year agreement with Babcock Marine in respect of support work for surface warships and submarines.

However, the claim was dismissed by a spokesman for SNP Deputy First Minister Nicola Sturgeon who insisted the new ships would be built in an independent Scotland while pointing out that under current plans one of the Clyde’s two yards – Govan – may close anyway.

No doubt that this will be touted as bullying by Westminster when clearly it is simple pragmatism. Scottish Deputy First Minister Nicola Sturgeon said: “The threat to Govan and its possible closure is happening now under Westminster rule, and the fact is there will be nowhere else on these shores but the Clyde to build these ships once Portsmouth closes its shipbuilding facilities.” This is pure fantasy and if I might add conceit. Portsmouth hasn’t closed yet and I will bet a penny to a pound that thousands of shipyard workers in Portsmouth are baying for Scots to vote yes… Read more »

It’s quite obvious that rUK would not maintain a major warship building and maintenance facility outwith its own borders.

I could not agree more, Alex Salmond and the dwarf have some weird ideas if anyone even the experts disagree with the SNP policy they are bulling Scotland.
As I see it the only bully is the Great and glorious alex he blind to the truth, is only aim in live is to break up the U.K. for his glorification.
I would dred to live in Alex Salmond land.

What disgraceful comments about Nicola Sturgeon by this individual. She is entitled to an apology.

Having read your replies to John morrisons response about the £ i feel you were/are not properly Qualified to do so as you claim we will be using it (£) in your own words illegitimately. i say this as you obviously do not know the meaning of the word.

Personally I thought it was fairly obvious that Sturgeon meant a shipyard actually capable of delivering an order of that magnitude. The article itself seems pretty darn unbalanced too. The fact is that an independent Scotland would not be tied into the rUK political ideologies that all the main Westminster parties advocate where there is no alternative to unbridled free market capitalism. It’s the rUK London-centric policies that’s seen actual manufacturing all over the UK die off over years in favour of becoming a state of service providers. Who’s to say that independence might not lead to improved investment in… Read more »

If the UK government decide to pull the plug on building our ships in Scotland then that is what will happen, what are the Scotts going to be able to do about it, go to war with us?? Only a fool would say that it couldn’t happen and there are plenty of people in the south that can build ships. I believe that Scotland will vote no. xx

As far as I can make out, every one of the previous respondents is missing the central point about the vote on 18 September. No doubt for a variety of reasons. The vote is not about whether you prefer Alex Salmond over David Cameron or SNP over Labour over Tory or even whether shipbuilding will be impacted positively or negatively depending on the result. The vote is purely about whether you are happy with the current level of self-determination in ALL Scottish affairs or whether you think there should be full determination. If you vote purely on economic concerns, you… Read more »

I would love to be independent

Hence i am voting NO

How Do You Feel Duncan McPhee? | Phoenix45

[…] Here is what Ian King, Chief Executive of BAE Systems had to say during the referendum campaign, “This shows clearly that, as we have previously stated, the only guarantee for the future of shipbuilding on the Clyde is for Scotland to remain part of the United Kingdom.” […]

[…] MoD announced 13 Type 26 frigates with Defence Secretary Michael Fallon making it clear that the investment was conditional on Scots rejecting independence. In the end the order looks like being just 8 ships as the money is needed to pay for new nuclear […]

[…] Then again, mother’s intuition? BAE said it will honor the contracts but it also said this in 2014. Do I sound cynical? I am an American teenager. It is unavoidable. […]