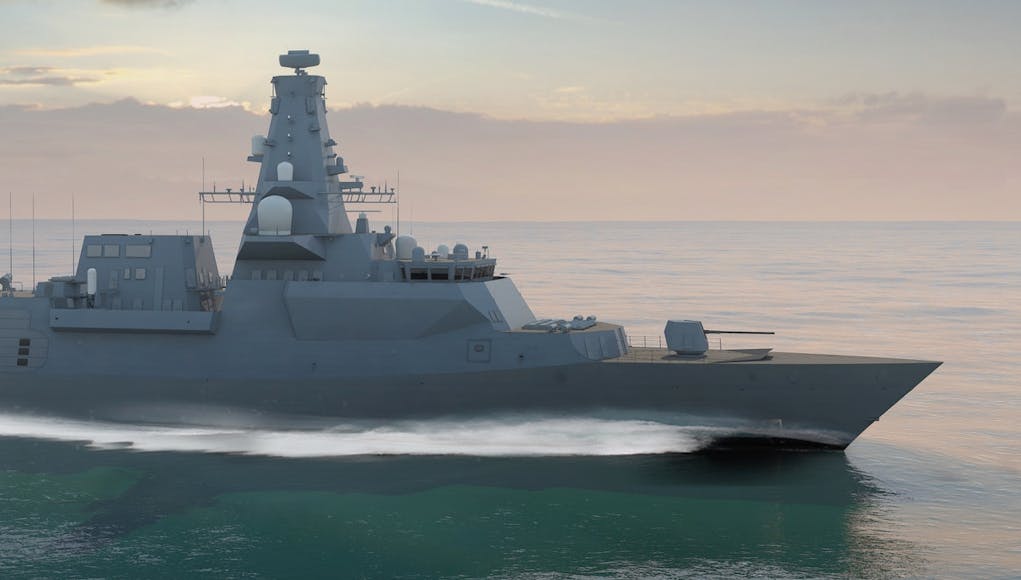 BAE Systems and Leonardo have announced new precision-guided ammunition that could see the effective firing range of the Mk 45 naval gun tripled, the same gun that will be fitted to the Type 26 Frigate.

Last year, BAE received a $245 million contract from the Ministry of Defence to provide the gun system, known as the Maritime Indirect Fires System (MIFS), for the Type 26 Global Combat Ship. Under the contract, the company will manufacture three MIFS Integrated Gunnery Systems (IGS) and one trainer system for the UK Royal Navy. The MIFS IGS includes the 5-inch, 62-caliber Mk 45 Mod 4 Naval Gun System, along with an automated ammunition handling system, gun fire control system, and qualified ammunition.

The Mk 45 naval gun is widely used by the US Navy and allied nations.

“As a leading global provider and integrator of all major caliber weapon systems, we are expertly positioned to integrate mission-driven, advanced, and affordable munitions like Vulcano into land and naval gun systems.”

“The Vulcano long-range guided ammunition family — part of the Leonardo’s global offer of naval, land-based, and aeronautical weapon systems for customers worldwide — represents state-of-the-art technology with its unmatched range, accuracy, and effectiveness, which was successfully demonstrated in testing.

Not only is it compatible with 155-mm land and 5-inch naval gun systems, Vulcano can also be easily integrated into current and future platforms such as the AGS — a major benefit.”

“With this product, we can achieve a maximum range approaching three times the range of standard ballistic ammunition from the Mk 45 gun, which is in use with the US Navy and 11 other navies around the world.”

“Starting with DDG 81, Mk 45 Mod 4 is being forward-fit to US Navy DDG 51 Class destroyers. Other Mod 4 applications include installations for the fleets of South Korea, Japan and Denmark.”

Deliveries of the gun to the UK are expected to begin in 2020. Joe Senftle, Vice President and General Manager of Weapon Systems at BAE Systems, said last year:

“Our teams in the US and UK will bring unrivalled skills and expertise to the MIFS development and production. The world-leading Mk 45 will provide the Royal Navy with a proven, reliable, and highly-effective system that is adaptable to firing a wide range of today’s ammunition, as well as future, precision-guided munitions currently in development.”

The Mk 45 is in service with the US Navy and 10 other allied nations. More than 240 Mk 45 guns have been delivered into service globally.

Can this gun be retrofitted to the type 45 destroyers?

For the T26 this is critical and the volcano ammo is a game changer – now we just need larger autoloaders and magazines purchased – but not gonna happen.

I wonder how well the guided rounds’ guidance systems resist ECM. I also wonder whether it would be best to delete $75m from the cost of each type 26 by deleting these complex guns. I think I’d rather have more Mk41 tubes and rely on helos and light guns for FAC defence.

The taxpayer are being ridden silly by BAE and their MOD cronies.

Pretty sure it’s more for Naval gunfire support than engaging small boats (the ammo, not necessarily the gun)

And what about warning shots? Dealing with small boats or even OPVs? Covering a landing? Are we going to waste a million dollar missile to take out an MG nest covering a beach when a shell fired from a MK45 could have done it for a pittance? Big guns like these still serve a strong purpose.

Yes, actually it would be a good start. I suspect that the bright spark who thinks one five inch gun is worth $75M might have his/her hand in some of the other aspects of the project’s costing.

Leonardo do the development.
BAE take care of the price gouge.

Its not £75 million per gun. £245 million contract was for 4 guns and a stockpile of ammunition. No chance of the gun being omitted from the design, the RN tried that once and it did not go well. No chance either of fitting them to type 45s as the 4.5 inch gun will still be in service with type 23 until the mid 2030s and so fully supported. At that stage you are looking at replacing not upgrading the type 45s. Pacman the order includes the autoloader and the ammo (full gun systems), so no worries there. Another piece… Read more »

Well said David. Also, as an additional correction (maybe just a typo on your part), but it wasn’t £245 million for 4 guns plus ammunition plus probably some other extras, it was £183 million (245 million Dollars).

The vulcano ammuntion using GPS and INS guidance has a CEP of around 20 metres and flight time of 4 minutes when firing at maximum range.

This is ok for ship to shore bombardment against static or slowing moving targets. However to engage a fast moving warship undertaking evasive maneuvers its a none starter.

This weapon system can in no way replace anti ship missiles.

But the MoD will try to save money on Harpoon replacement! You can just see it coming!

The replacement of harpoon needs to be undertaken as an urgent programme. £300-400 million would provide enough Norwegian anti ship missiles for the RN surface fleet. Based on quoted list price of £1 million each. what is happening with sub harpoon? Is this being taken out of service next year too? If so then the submarine fleet will also have a capability gap and no ability to sink enemy surface vessels at long range. That is going to put the submarine at risk of detection and being sunk if it has to close to close range to fire torpedoes every… Read more »

I understood sub-launched Harpoon was withdrawn some time ago ~2003 if I recall.