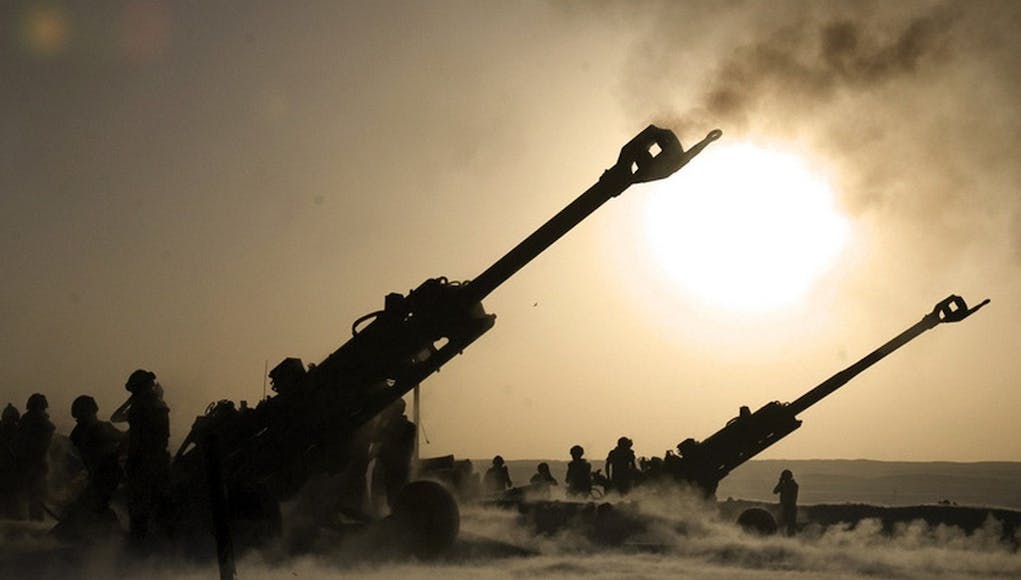 BAE Systems has received an order to provide 18 additional M777 155mm Ultra Lightweight Howitzers to the US Army under a new contract from the US Department of Defense.

This order builds on the more than 1,000 M777 gun systems already in service with the US Army and Marine Corps, as well as logistical support contracts received from the DoD.
“This battle-proven capability leverages technical insertions, long-range precision guided munition developments, and flexible mobility options, to make the M777 a very effective artillery technology,” said Joe Senftle, Vice President and General Manager of Weapon Systems at BAE Systems.
“This order further demonstrates a strong and collaborative working relationship between BAE Systems and the Army.”
The M777 Ultra Lightweight Howitzer has become the benchmark for 155mm lightweight towed artillery systems, delivering superior artillery capability in the most hostile environments with unrivalled tactical and strategic mobility.
The gun was initially developed for the US Army and Marine Corps in the early 2000s. Later its users expanded to include a total combined international and U.S. domestic orders exceeding 1,200 guns.
Work on the contract will begin immediately with support from suppliers across the United States and United Kingdom and the BAE Systems facilities. Deliveries for these additional 18 guns are expected to commence in 2021.
0 0 vote
Article Rating

18 is a very small number for this sort of weapon. Replacements ?

I think so. They have had some hammer in the Sandbox.

Very interesting. It would be nice if these 18 were coming our way to 29 Cdo RA and 7 RHA……

People complain that we only have so many tanks.

The RA is in worse state. Utterly neglected.

Surely effective and plentiful artillery is cheaper than air support?

And the Regiments for 16 Bde and 3 Cdo Bde now only have 2 Batteries and a strength reduced from 18 guns to 12 L118s. Don’t get me wrong the L118 is an outstanding weapon system and has been updated massively, and was the weapon of choice over Afghanistan due it’s high rate of fire, ability to be close support, manouverabilty, lightweight and accuracy. And the fact the 105mm has a decent number of fuse options and can be utilised with a view of less colatteral damage. However as normal it’s all about manning. Not enough guys and gals, not… Read more »

I knew both 7 RHA and 29 RA were down to 12 guns.
I was not sure if they had kept the 3 gun batteries in 29 and made them 4 guns each or removed the Arbroath based battery and just kept 2 batteries with 6.

I had no idea we had that many LG still. Good to know.

I didnt include the Regiments of the Reserve, 2 or 3 use the LG too.

Arbroath Bty is now gone I’m afraid, but a small consolation is that the HAC has gone back to having a 3 gun Troop, to support 7 RHA. So they have gone back to a bit of gunnery as well as STA. But oops, for God’s sake don’t call 7 RHA that and forget the “para” in the title. We do rip it out of them but they are a decent bunch of lads who do airborne gunnery, which has its own set of challenges and hardships, and they form the fire support teams within the rifle companies……And never ever… Read more »

I could understand the reduction in tubes if the reason given was PGM. But it is just cuts. A 155mm Excalibur round is about £50k a bang, which is less than a Javelin which is about $75k a pop. I think the MoD bought about 1500 of the latter about a decade ago to replenish stocks. It is a wonder weapon but you do have to ask yourself is their gap it is filling for something more appropriate? A ‘towed piece’ that could live with the support companies. I suppose with aircraft you have to factor the cost of the… Read more »

The Russians have never forgotten the value of artillery after WW2.

The British army have no 120MM either I believe?

The Russians don’t give a F about collateral damage though. They would just level everything so precision munitions are of no concern. I guarantee they don’t spent 50k a round for artillery.

During the Cold War considering we would have been forced on the nuclear pretty quickly I don’t think we were too worried about collateral damage either.

There is still a need for mass fires, unfortunately there has always been collateral damage in war. PGM isn’t a silver bullet. It would just mitigate damage.

Considering in all these conflicts the NGOs, politicos, and media insist on using kid gloves in all turn into insurgencies. During which the insurgents will kill more of there own civilians and destroy more of their own infrastructure than any quick and efficient campaign ever would. What is the point of avoiding collateral damage to the point of slowing down and inflicting casualties on your own forces? When insurgents are sheltering in neighborhood and using human shields. They are doing it only because they KNOW that it will keep the governments of the West from ordering them shelled. When they… Read more »

Sorry about the typos.

Is it just me or is every time there’s an article here about any weapon system land, sea or air someone/ more than one person suggests we buy some !

We always seem to need twice as much as we get. And what we get isn’t full fat. 🙁

Take T45, We ended up with 6 with deficiencies to replace 12 T42. The initial plan with T42 was to buy about 24+ all to B3 standards (and perhaps better). We ended up with 12 with the first being built to a truncated design that was shown to be false economy in the Falklands.

I am just hoping we get all the F35b now. I expect when we have 7 Astute’s that Astute will be dropped/

Hi David I think you will find that some of us are for mass retirement of certain types of weapon and standardisation and modernising of others. As always it comes down to individual views. I think people would generally like our armed forces to be slightly larger (so that personnel get a good work life balance, rather than us just having more people) and that they were better equipped. I for one am happy to remove all tanks, warriors and Ajax (ie our heavy armour tracked capability) for a larger Boxer fleet backed up with a much larger force of… Read more »

Okay guys you make good points. But I remember all the same arguments about money when we were spending 3% or 4% of GDP on defence. Do you not think a Doctor, Nurse, Teacher or Policeman wouldn’t say exactly the same ‘If only we had 25 – 50 – 100% more money’ There’s an old saying ‘To govern is to choose’ we can only spend our cash once. There isn’t a mum or dad or credit card we can go too and ask for more. If you want some new bit of kit say what you would get rid of… Read more »

David that is because we should actually buy some

Afternoon all It is always very easy to get into the numbers game, specifically how many of this or that – in this case the tubes artillery ORBAT of the U.K. military. And yes David, normally that means people advocate buying some. Until we work out what we effect we wish to generate, how we want to move around the battlefield the subject is mute. With regard to the M777 – great gun and light weight but the gain is lost when you realise how much heavier the weapon is (155mm artillery round), we would need to increase the size… Read more »

Nothing can replace a battery of AS-nasty firing on an objective before the run in, smoke, Ilume and HE are vital if you are to survive the first few minutes of an attack. If you look at what has been going on in Ukraine over the last few years you will see that (Not) the Russians has been re-invigorating their arty units, each brigade having a 2S-19 regiment and some sort of launcher regiment, that’s a huge amount of firepower in one place and it really is getting results. Lee: Agreed, AS90 is getting on a bit and has missed… Read more »

Given the logistics chain associated with the bigger 155mm artillery round, would it be sensible to have an SPG based on Boxer equipped with a 105mm gun. Whilst an AS90 replacement should be equipped with a 155mm gun. The whole point about Strike is that it is meant to be mobile and light on it’s feet(wheels). Keeping the logistics burden down will help with this.

I agree. Light always implies difficult terrain too. But we could consider our vehicles are bigger these days so carry more, but there aren’t as many, which means we have in a way ‘shot ourselves in the foot’. But I could make an argument that use of PGM might reduce the number of shells needed. And that other having only one heavy shell in the inventory used bother for towed and SPG might actually accrue more savings.

Paul the 105mm is too lightweight too deal with AFV’s. We used to operate an SPG called Abbot that had the 105mm and it couldn’t hurt an AFV except in direct fire and we knew that 40 – 50 years ago.

Yet the RA persist in using the towed version of the 105mm.

Yeah Paul but it’s only for rapid deployment forces nowadays (RM/Paras) They aren’t daft enough to use them against AFV heavy forces.

Is there not a Boxer version of the AS90 available and I really like the Caesar system as well.

Perhaps there are a couple of relatively straight forward solutions that would enhance the strike brigades going forward. probably worth getting some modules for boxer at worst.

Self propelled Ceaser had been mentioned as a possibility for 3 RHA and 4 RA, the gun regiments which will support the Strike Brigades.

Director Royal Artillery said in a letter that there is a budget for a new hun for these formations.

Yes. But it looks ungainly……

That looks like a rollover waiting to happen. On flat terrain it should be fast though.

Mike (not sure which one)

Seriously though I never saw the point of AS 90 on tracks. Sure it can go where the tanks go etc etc but the drops wagon delivering ammo can’t. I agree Caesar looks like a good solution.

Morning all Good to see how small pieces of news can turn in to solid debate and discussion. With regards to the state of Royal Artillery – it has been an areas that has been neglected after years of operating in Afghanistan where the light gun and the advent of the drone took centre stage. Like other parts of the Army ORBAT, especially tanks, the inability of the military to fully sustain an all arms posture has left those that are not being heavily utilised to fall by the wayside. We have to remember that the option to take AS90… Read more »

160+ AS90 in storage where the British Army has most of its equipment nowadays. There seems to be no move to upgrade what is left or to upgrade 2 or more ‘reserve’ regiments at least. 45+ GLMRS AND 250+ CR2 also gathering dust and rust. With deployabe brigades reducing the army is now being deprived of its heavy stuff and all we be will left with is fast mobile strike brigades – God help us – with as much strike power for the most part to knock the skin off a rice pudding. The army has never adopted the 120m… Read more »

The AS90 reserve regiments comment is worth highlighting in my view.

I think there are 2 reserve regiments supposed to be “aligned” to the 2 RA Regiments supporting the Armoured Brigades and both, like all the rest of the RA reserve gun regiments, have the Light Gun!