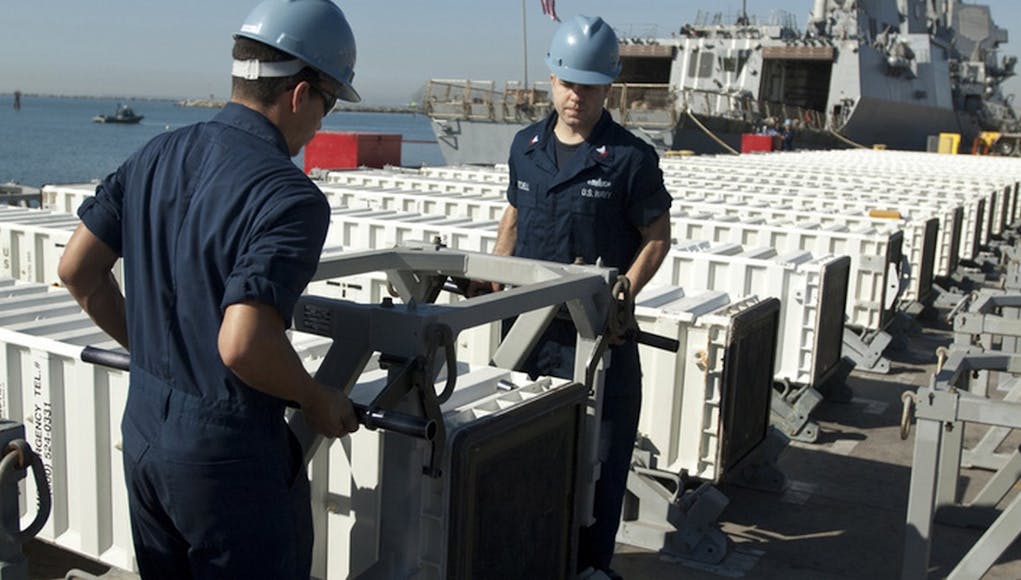 BAE say that the initial contract was awarded in February with $24 million funded, followed by contract modifications of $99 million and $43 million received in March and May respectively.

Options on the contract include additional canister types for future Navy production requirements.

“These canisters are a key element of the Navy’s Vertical Launching System, and our experience includes 30 years of VLS production, integration and testing to support this world-class capability,” said Brent Butcher, vice president and general manager of the Weapon Systems product line at BAE Systems.

“The Navy will continue to benefit from our high-quality canisters and lean, efficient operations, which translate into the best possible value for our customers.”

VLS canisters serve in a multifaceted role as containers for missile shipping and storage as well as launch tubes when loaded into the VLS. They also provide identification and firing support to multiple missile types, including the Tomahawk Land Attack Missile, Standard Missile-2, Standard Missile-3, Standard Missile-6, and the Evolved SeaSparrow Missile.

Under this latest contract, BAE Systems say it will produce canisters not only for the U.S. fleet but also for allied nations under a Foreign Military Sales program.

“Deliveries for the initial order are expected to begin in early 2021, and if all options are exercised, the contract could support the production of canisters over a five-year period, with deliveries extending into 2025. Work on the new contract will be performed at the BAE Systems production facility in Aberdeen, South Dakota, with engineering and program support in Minneapolis.”

“… Work on the new contract will be performed at the BAE Systems production facility in Aberdeen, South Dakota, with engineering and program support in Minneapolis.””

Hopefully, better news for the good people of that city.

Couldn’t they bung a few in our direction?

Sadly would be no different to any American company bunging a few our way in other words zilch chance. Even Bae’s top management here are sorely limited in the knowledge, beyond profitability and financials of the US side of the business.

With the 20% reduction of our GDP in one month, the defence budget has been wiped out in one swift blow. The credit-crunch on steroids. The Defence and Security Review will be more cutting and slicing than the 2010 Review. Possible Caualties: 138 F-35 – No chance – cut and slowing down of current purchases Ajax cut to bare minimum Boxer cut to bare minimum JLTV cut To bare minimum HMS PoW mothballed or sold Army numbers cut Navy numbers cut RAF extra squadrons cut P8 order trimmed E-7 down to 3 No upgrade to Challenger Protector order from 20… Read more »

Meanwhile the place this pandemic started, China is racking in the money from all the supplies, equipment, ect needed to combat the virus not too mention all the panic buying of stuff people are doing and feeding it all back into their giant defense buildup and continuing cyber espionage/stealing of Western trade secrets. LOL. How did the West ever get so crazy as to make the Chicoms virtually unstoppable? Oh yea, it was our unquenchable appetite for cheap goods.

How do you know that this money is going to defense?, as opposed to their massive poverty elimination program? Or high speed rail? Or UHV DC power lines? Or massive free trade zones? (things we can only dream of) We can hardly blame China for making cheap goods, considering it was western capitalism that created it. Companies are all to happy to exploit cheap human labor in deplorable conditions if it makes more profit for shareholders. Also, China is not directly profiteering from supplying equipment. What we are seeing now is how China is rapidly adjusting their strategies to incorporate… Read more »

Sorry for the fake news, it’s 10B Eur.: https://www.defensenews.com/global/europe/2020/06/10/germany-wants-to-beef-up-its-defense-firms-with-pandemic-relief-funds/

Too pessimistic – by a long way I’d say. Austerity budgets were tried the last time and universally decried as being the wrong approach. Interest rates on UK bonds are either close to zero for 10-year or negative, based on the recent oversubscribed offerings. So the correct approach is disciplined borrowing to maintain budgets where appropriate, or expand them where growth will help drive a recovery of employment. For defence its generally not practical to try accelerating capital programs, so instead hold to existing program timelines where consistent with future defence needs. Low hanging fruit though would be recruitment to… Read more »

Way too pessimistic, we are already seeing Germany making making up to 20B EUR extra available to their armed forces to spur economic growth through defense procurement. Same will happen here. This could manifest itself as more Type 31, accelerated build of Type 26 and Tempest as well as large orders for support ships and further large investments in cyber and space. No way are they going to cut headcount, they will do the opposite and fill the ranks. That doesn’t mean that a load of stuff won’t be canned (looking at you Ajax), but the Defence budget is going… Read more »

Austerity is not going to be an option, but essential, the economy is going to be too heavily hit and debt too high to do anything else. Can’t really argue with it either, considering this is going to make the banking crisis look like a tiny blip.

@Steve – certainly can argue against austerity. The UK has had much higher debt levels historically, after WWII for example it was ~250% of GDP, and the UK grew its way out of it. For reference debt was ~81% of GDP in 2019. With the current close to zero interest rates, debt can be financed at very low cost.

Grew out of the debt over a period of 74 years, during which the country had to pay off massive interest payments and if you look what the country was like during the 50s / 60s (quality of life was terrible) or look how the country colapsed from being the largest superpower to a very very long way off that, i don’t think we really want deal with the debt like we did post WW2. Inflating out of debt unfortunately has a lot of negatives, as the only way to achieve it is to crash your currency compared to other… Read more »

UK debt was down to ~100% of GDP by the early 60’s, ~50% by the early 70’s and down to ~30% by the early 90’s, so while we may have continued to pay back the debt until much later, it wasn’t material to the UK’s overall debt position for the 74 years you imply. I lived through the 60’s and quality of life certainly wasn’t terrible and we were hardly affluent. We didn’t need to be a superpower post WWII, especially as we correctly withdrew from colonial aspirations. No need to crash our currency. Ironically economics currently are working on… Read more »

I think that most major economies will soon have Debt to GDP in the 100% – 200% range, it will be the new normal. This also levels the playing field between a bit more between countries and could make replacing the dollar easier. All countries will have more debt, but financing is coming from their own central banks and interest rates are low. It’s something we will all have to live with, probably in the form of permanent, slightly higher taxes. I don’t think it will cause massive austerity. I think we are going to spend our way out of… Read more »