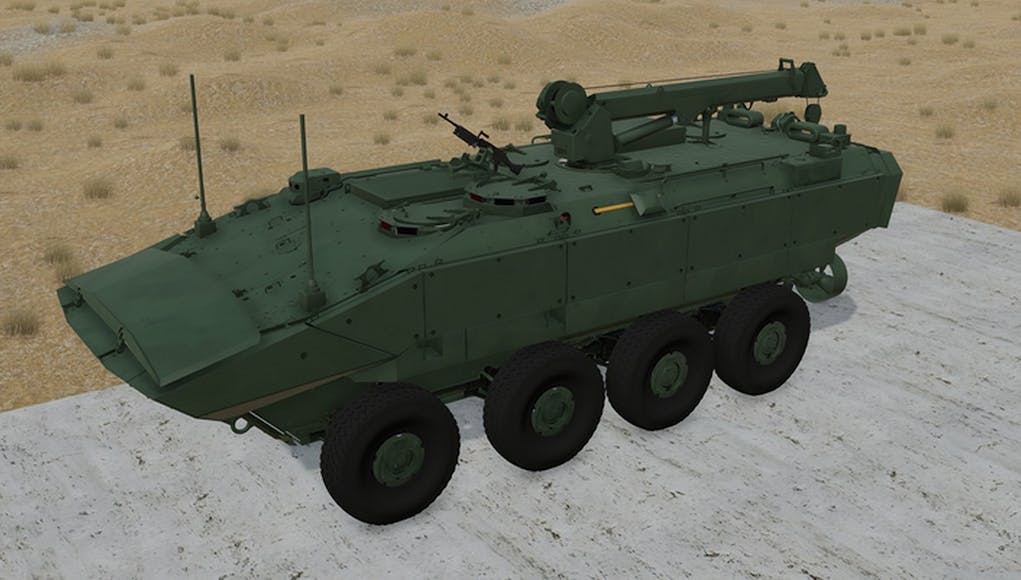 The U.S. Marine Corps has awarded BAE Systems a contract for the design and development of an Amphibious Combat Vehicle Recovery (ACV-R) variant.

According to the firm here, BAE Systems has received a $34.9 million contract from the U.S. Marine Corps for the design and development of an Amphibious Combat Vehicle Recovery (ACV-R) variant.

“The ACV-R will replace the legacy Assault Amphibious Vehicle recovery variant (AAVR7A1), and will provide direct field support, maintenance, and recovery to the ACV family of vehicles. This contract is for the first phase of the program, which focuses on the design and development of the ACV-R during a 20-month period. The second phase of the program will include delivery of production test vehicles for user evaluation.”

“The recovery variant will provide crucial recovery capability in the amphibious fleet. It also expands the ACV family of vehicles and demonstrates the base vehicle’s proven design, allowing it to be seamlessly integrated into the fleet without compromising performance.”

The ACV program is in full-rate production with BAE Systems, and the company is under contract to deliver two other variants in the ACV family: the ACV personnel variant (ACV-P) and the ACV command variant (ACV-C).

The company has also received a design and development contract for a 30mm cannon variant (ACV-30). Additionally, BAE Systems has received task instructions from the Marine Corps to complete a study of incorporating advanced reconnaissance, command, control, communication and computers/unmanned aerial systems mission payload into an ACV variant.

That was certain. It is after all the ACV to recover ACV’s

looks like BAE is winning a lot of new contracts lately.

Last edited 12 days ago by Bringer of facts
Reply

Interesting that the US trusts BAE to make decent kit, yet MoD/Ministers really did not want BAE to build an Ajax vehicle.

Not everything US built is perfect, there have been a lot of quality control issues involved in this programme, but, as far as I know, it has been sorted now. The issue’s with Ajax tho’ can that be sorted also? Only time will tell I suppose!

Yes whatever the MoDs reasons not to employ Bae for what became the Ajax project it wasn’t directly a question of quality, after all it’s not like Swedish capabilities and quality in defence products is in any way worse than the US/Spanish/Austrian product that became Ajax. Far from it indeed, but a wider political decision came into play I assume, greatly around the cost and delays of Bae led projects generally I suspect. Talk about biting off your nose to spite your face eh.

I am sure that MoD did not doubt the quality of BAE Land products, whether they are from the Swedish side of the business (was Hagglunds), the UK side or elsewhere. It seems that there was an embarrassment that BAE had been winning so much business in recent years and the impression of competition had been lost. There was residual criticism of the Nimrod MRA4 project (even though the Treasury was mainly reponsible for its demise) and maybe it was felt that BAE had to be ‘punished’. BAE in its own right and by dint of heritage (companies taken over… Read more »

It looks like a nice bit of kit. Based off the Italian vehicle. Italy seems to be able to make small numbers of useful kit for its forces.
I’ve not had a close look at Italian programs so they may have faults but there stuff looks nice

It was a commercial endeavour by Iveco (same group as Fiat). Neither the SuperAV or the ACV vehicles are in service in Italy.

They sold 2044 of 6×6 SuperAV version to be build in Brazil so certainly not a small number.

Yes, it looks like the Italians are looking for some of the BAE vehicles. I think that’s where I got it round the wrong way. I do like the look of there new assault rifle. The name escapes me. Maybe acx180 or something.
The Italian main battle tank has a look of challenger tank about it.