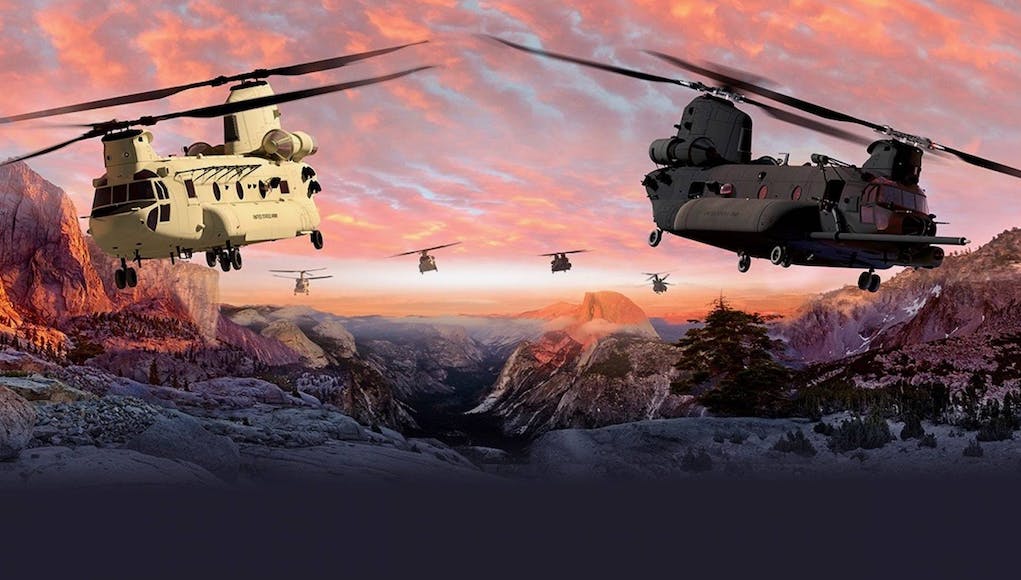 Boeing and the US Army celebrated a major CH-47F Block II milestone with the loading of the first engineering and manufacturing development helicopter into final assembly this week.

“Whether it is increasing total payload, improving the transmission, advancing the Chinook rotor blade, or setting the conditions for supervised autonomous flight, this aircraft provides ground tactical commanders immense capability to win in the multi-domain battle.”

According to a release, the contract to develop the next-generation Chinook for the US Army conventional and Special Operations Forces was awarded to Boeing in July 2017. The Block II program incorporates several upgrades to increase lift capability, including Advanced Chinook Rotor Blades, an upgraded fuselage, new fuel system, and new drivetrain. These updates greatly increase the commonality between US Army and allied fleets, thus reducing maintenance costs.

“Our progress from contract award to final assembly in less than a year is a direct result of the efficiency and reliability of the program,” said Chuck Dabundo, vice president, Boeing Cargo Helicopters and H-47 program manager.

“Block II upgrades will help keep Chinooks in operation for the US Army into the 2060s.”

The first Block II aircraft is expected to be completed in 2019, with flight testing scheduled shortly thereafter. First delivery is expected in 2023. Eventually, the US Army will upgrade more than 500 Chinooks to the new configuration.

Will the Chinook be the only aircraft to be in active service for an entire century? Immense machine.

No, the B52 Stratofortress is expected to do the same.

Unbelievable, this along with the C130 and B52 have proved to be incredible flying machines, and is obviously, proof of 1950’s designed US aircraft longevity! Phantoms still fly in some airforces and the Sikorski Sea King has only just been written off charge with the UK armed forces. If we can learn one lesson, that is to design and build for an extended life cycle on such support aircraft. I wonder if the 400M & Merlin will still be flying in 6o years?

It is entirely possible that the A400M could still be flying as long as the spares are still being produced and new versions designed (This often depends on the number in use). Support aircraft do not necessarily have to be cutting edge so as long as the basic design is sound and useful then they will still be used. Lets not forget that the Chinooks flying today are not exactly the same as the first ones produced. The basic design is the same but the aircraft are new and have vastly modernised systems. It is like the broom analogy. “I… Read more »

What I was referring to was the basic design, that proved so flexible to allow endless updates. The strength built into those iconic airframes has saved the US Treasury billions.

I think it’s a rather unfair comparison as while I have no doubt the A400M can last 60 years of service with reasonable maintenance and care aircraft design will change radically over that time due to the entering of service of much more efficient aircraft.
There will be a switch to electric power and the use of much cheaper composites and overall aircraft will change more in the next 60 years than the last 60.

Composites for aircraft are actually pretty expensive compared to run of the mill Aluminium. They get comparable when talking about more advanced alloys such as Aluminium-Lithium, which can be compared due to both it and composites having weight saving properties. Indeed, the Merlin has quite a bit of Aluminium-Lithium on it. I have no doubt that the cost of composites will reduce as we gain more experience manufacturing them and they will probably completely replace Aluminium, even Lithium alloys due to the relative scarcity of the element. It would be nice for the UK to get in on these upgrades… Read more »

I agree it’s a great achievement for the Chinook etc but there will be very little of the original 60’s chopper left in the design. The only things in common will be general appearance and name.

Chinook. Awesome machine. Great aircraft. BTW, A400M will definitely be around for next 60 years! And contract says Airbus has to keep providing spares as long as five airframes anywhere in the world are still flying. A400M’s entire wing is composite (with some alu bits), as are large sections of the HTP and VTP. Whether it is upgraded or remains economically and viably supportable however, is very much up to the operators and how they decide to operate the aircraft. But anything is possible with any airframe so long as there is a need, the will and the budget to… Read more »

Very true, the US actually spent more on the B52 Vietnam war upgrades back in the 1960’s and 70’s ( structural big belly mods and avionics etc) than we spent developing and fielding our entire V bomber force!

Yes they will most definitely be around. Transport aircraft tend to have longevity. There are still WWII era DC-3s and their C-47 variants flying around. Especially in South America because of their ease of use and reliability in addition to their primitive airfield capability.