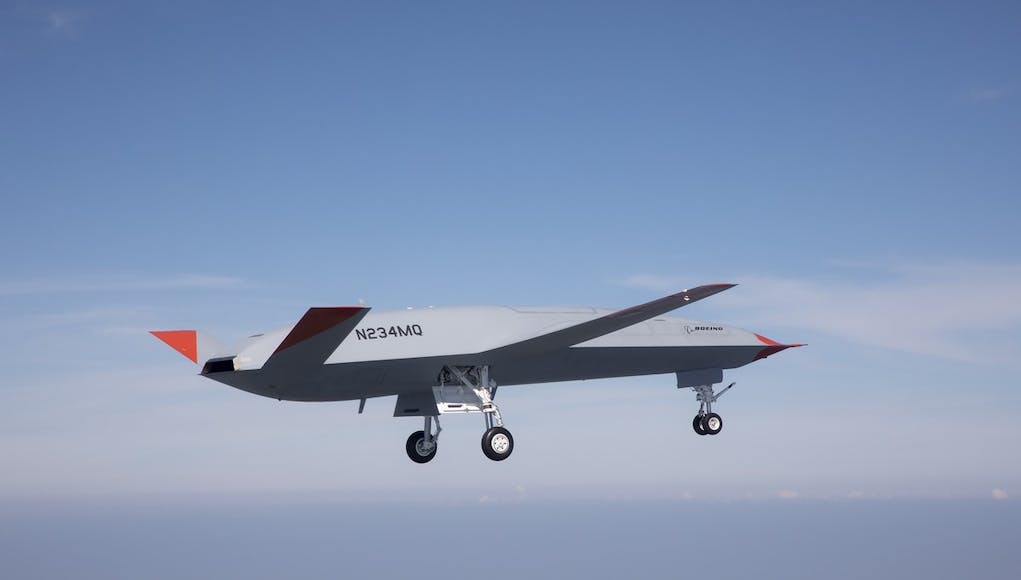 Boeing and the US Navy have successfully completed the first test flight of the MQ-25 unmanned aerial refueler.

The MQ-25 test aircraft, known as T1, completed the autonomous two-hour flight under the direction of Boeing test pilots operating from a ground control station at MidAmerica St. Louis Airport in Mascoutah, where the test programme is based.

The firm advise that the aircraft completed an autonomous taxi and takeoff and then flew a predetermined route to validate the aircraft’s basic flight functions and operations with the ground control station.

“Seeing MQ-25 in the sky is a testament to our Boeing and Navy team working the technology, systems and processes that are helping get MQ-25 to the carrier,” said Boeing MQ-25 Program Director Dave Bujold.

“This aircraft and its flight test program ensures we’re delivering the MQ-25 to the carrier fleet with the safety, reliability and capability the U.S. Navy needs to conduct its vital mission.”

The Boeing-owned test aircraft is a predecessor to the engineering development model (EDM) aircraft and is being used for early learning and discovery to meet the goals of the US Navy. Boeing will produce four EDM MQ-25 air vehicles for the US Navy under an $805 million contract awarded in August 2018.

The MQ-25 will provide the US Navy with what Boeing describes as a much-needed carrier-based unmanned aerial refueling capability.

“It will allow for better use of the combat strike fighters currently performing the tanking role and will extend the range of the carrier air wing.”

T1 received its experimental airworthiness certificate from the FAA in September, verifying that the air vehicle meets the agency’s requirements for safe flight.

Testing will continue with T1 to further early learning and discovery that advances major systems and software development.

Would be great if we could attach a simple external sling shot system to our carriers in the space next to the ski ramp for launching heavy drones, and maybe a simple arestor wire gets put over part of the rear deck for recovering them drones. Or just get a tilt rotor drone or helicopter Drone.

The V 247 looks very interesting, could it be adapted for AEW I wonder? Crowsnest is a great system for what it is but to this MoP seems limited by being based on a rotary platform.

Chris, see the other post on Westlant19 about the USMC MUX UAV program. To be brief the aircraft is being developed to include AEW and communications as one of its roles. Fitting a AEW radar to a helicopter does limit its available range due to the limited service ceiling a helicopter can obtain. The Sea King could reach just over 3000m, whilst a Merlin can reach just over 4500m. By comparison the V247 can reach just over 7600m. The Merlin with the updated radar in Crowsnest, should give a better range than the Sea King ASaC. However, its maximum range… Read more »

USN should just bring back the S-3 Viking. The best carrier born ASW aircraft ever and also does aerial refueling.

They did consider bringing back the S-3 but in the end that means you have to bring back all the personnel from pilots through to maintenance crew.

The MQ-25 will take less people and be cheaper to operate, I think it also has a whole load of other interest possibilities when it comes to what it could be used for.

The development of this aircraft is the reason why I question the reasons for building the QE carriers the way we have. I can see the future of the MQ-25 as not only being in the air-to-air refeuling but being equipped for Electrinoic warfare and radar package Crowsnest of the fleet. The most important developement of the MQ-25 would be as a strike package, destroying enemy surface-to air missile batteries and their radar systems, basically punching a hole in enemy air defence to let the F35s through. I can see the need in the future possibly at a mid life… Read more »

Hi Ron, I had put forward that thought as well a while back, could the ski ramp and a catapult be merged together? I was told it couldn’t, as it would place too much strain on the undercarriage. They even mentioned that the first F35B prototypes had to have redesigned undercarriage mountings, as these were showing signs of stress cracking after using the ramp. This upgraded modification has also been done on the C version. The oleos were also being fully compressed during take-off, which made it very bumpy, so the damping has been modified. I cannot see why the… Read more »

DaveyB, I didn’t check the issue with the undercarraige as to be honest the moment something gets more than ten feet of the gound its all a bit goobiliegook for me. I always thought that the carrier aircraft had stronger undercarraige as the pilots don’t land but control the crash. If that makes sense. As for the angled deck, I can see no reason why it could not be possible, the QEs deck is wide enough to do it without major alterations. It would even make sense for a roling landing of the F35B as it would keep them away… Read more »

I had something similar about EMCAT, but wasn’t sure. Looking at the EMALS design and comparing it with the EMCAT. I really can’t see why EMALS won, it is more complex.
It would be really funny if GE went to the US Navy and cancelled EMALS and said we have a better system available.

Somehow I don’t think the carriers will ever be modified for CATOBAR use, even if EMALS matured sufficiently. I think there would be so much structural changes to be made they’d probably think why bother. I also don’t think you’d be able to install catapults anywhere without running both of them over the landing strip, as the first island is so far forward, so the sortie rate would suffer too. And potentially you might lose some deck parking spaces too. I think BAES got out of jail free with the problems the Americans encountered with EMALS, as otherwise they might… Read more »