The UK and Belgium have agreed a Bilateral Statement of Intent (SoI) to explore collaboration on the MQ-9B Remotely Piloted Aircraft System (RPAS) which both nations are acquiring.

Known as Protector RG Mk1 in the UK, MQ-9B is the first RPAS to be designed, built and certified against stringent NATO and UK Safety Certification standards equivalent to piloted aircraft to allow flight in unsegregated civilian airspace.

According to the Royal Air Force, the SoI was signed by Air Chief Marshal Mike Wigston, Chief of the Air Staff, and Major General Frederik Vansina, Commander of the Belgian Air Component. The RAF add that both parties will now focus on opportunities to work together on training, maintenance, logistic support, interoperability and capability enhancement.

“This Statement of Intent between the UK and Belgium reflects our shared ambition for Protector, the MQ-9B Remotely Piloted Aircraft System, working in partnership to tackle threats to our national and collective security. The Royal Air Force and Belgian Air Force will explore opportunities to train, maintain and work together on this game changing aircraft using its cutting-edge sensors and systems to protect national, NATO and European security. The introduction of Protector MQ-9B reflects a step change in remotely piloted aircraft operations in Europe and worldwide. The Royal Air Force is delighted that the Belgian Air Force will stand beside us again on that historic journey.”

Last month Defence Secretary Ben Wallace announced a contract to build the first three UK Protectors with an option for 13 more in due course. Belgium is procuring four MQ-9Bs.

What ever happened to taranis…

From what I last read it was only ever designed as a demonstrator to test systems and capabilities not a final solution in itself on the basis that such aircraft will be likely required by the 2030s and no doubt with the intention of showing the suits what such capabilities can do. It completed its programme accordingly. Hopefully though I have no personal knowledge Bae are using the knowledge (and hopefully interest) gained to plan for such an evolution. I am sure that it could have been pushed on for production but sensors and technology for such aircraft are evolving… Read more »

I think this gives us an insight as to what Taranis was designed to do!

The project was directed towards designing and flying an unmanned aircraft, gathering the evidence needed to inform decisions about a future long-range offensive aircraft and evaluating UAVs’ contribution to the RAF’s future mix of aircraft.

Taranis is stealthy, fast, able to carry out test deployment of a range of munitions over a number of targets, and to defend itself against manned and other unmanned enemy aircraft.”

Taranis was only a half size demonstrator and our government unlike the French didnt stump up the money to produce the next prototype in the development programme.

So is it on hold or cancelled?

I believe the money was redirected to tempest

Taranis is an alternative one-way delivery system for instant sunshine.

So 20 as the number banded about in the corridors of main building was pie in the sky.

I read we were using Australian ‘pilots’ to control our predators because we didn’t have enough trained, so i don’t think we could realistically up our fleet at this point beyond optics of having more but not being able to use them.

I remember when I was in the mob we had 20 Kiwis flying the Jag in the early 2000s. We were short of drivers and the RNZF got rid of thier scooters.

The MoD like using “up to – ” phrases to inflate things. Though I don’t see using Australian pilots as a problem. When it comes to intelligence, we are hand in glove with the 5 eyes nations. Same systems, procedures, joint working. With exceptions of course. For example, the DIFC and other elements of Pathfinder at Wyton are multi service, multi agency, and have other nations staff embedded. Are we under staffed? Or simply working collaboratively. When we became involved in the Predator programme we were embedded with the USAF at Indian Springs, with 39 Sqn, and still are, even… Read more »

The problem isn’t that Australian pilots were used, it was that there wasn’t’ enough RAF ones available, which is a significant problem.

We don’t have Predators. The Australians are buying Reaper, hence they have embedded their aircrew in both USAF and RAF Reaper units to gain experience before their own are delivered.

Looks that way Mark – I bet we won’t get anything close to the 16 now touted.

I wonder if the Belgians’ 4 Protectors, the 4 we were going to buy?

The 20% hammer at work perhaps?

Wouldn’t surprise me. Belgium is unlikely to have received a competitive price purchasing 4, so the UK tagged them onto its order of 16 to help them both push the price down. Realistically European Nato countries need to do more joint off the shelf procurement and integrate maintenance and training costs to operate more efficiently.

But unreliable as a dependable ally. I remember the Falklands when we asked Belgium for Artillery ammo but they refused 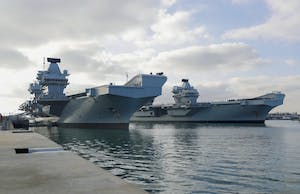 May 4, 2022
HMS Queen Elizabeth will now complete a period of operational sea training.