The LRIP lot 8 aircraft add to some 166 F-35s already contracted under LRIPs 1-7. As of October 2014, 115 F-35s have been delivered from Lockheed Martin’s production facility in Fort Worth, Texas. The US and allies plan to procure 3,100 aircraft over the life of the program.

“This is a major step forward. The Lightning II will equip the Royal Navy and the Royal Air Force with a highly advanced multi-role stealth combat aircraft, operating from both our new Queen Elizabeth-class carriers and land bases. This programme is also bringing substantial industrial benefits to the UK, providing thousands of skilled jobs in the UK aerospace industry.”

“We welcome today’s announcement by the UK MoD confirming agreement in principle has been reached on an order for the first production batch of four F-35 Lightning II stealth combat aircraft. BAE Systems is a teammate on the F-35 programme, which supports almost 2,000 jobs in our UK business where we build the aft fuselage, horizontal and vertical tails for all three variants of the aircraft.”

The UK intends to order 14 F35Bs by 2018 as part of a long-term plan to buy a first batch of 48. The final contract to buy the four jets will be signed in the next month, the Ministry of Defence said the final price for the four initial jets had not yet been agreed.

“The announcement from the MoD that it will soon be ordering the first batch of F-35B operational aircraft is great news for the UK.

Not only will these cutting edge aircraft deliver the best possible operational advantage to our armed services, but UK industry and the broader economy will benefit from our significant involvement in the programme.

Around 15% of each aircraft will be made here in the UK, recognising our world-leading capability in designing and developing future technologies. The programme will create and support around 24,000 jobs in 100 UK companies and their supply chains.”

The average unit price for all three variants of the aircraft in LRIP 8 is approximately 3.6 percent lower than the previous production lot, costs are expected to fall even further.

Will this be like the Helicopters we bought from the yanks….we get the kit but can’t afford the software to fly the dam things….total waste of money… a weapon is no use if you need another country’s permission to use them….more proof that our leaders are f***ing useless.

FOUR…..so that’s one on each carrier…and 2 for the defence of the realm….

What should have been done is to have design, build and work with EADS to build a Harrier of the 21st Century not some awful American “also ran”.

Simply put Paul, no. The UK are a tier 1 partner, with 40�f the fuselage being built here. We have had pilots and partners there since day one.

However, UK Defence Journal, this aircraft is massively behind schedule and the software that is integral to the aircraft is known to be somewhat bug ridden to say the least! Various US senators, not that I have a lot of time for them, have spoken out regarding the massive cost overruns and delivery milestones not being met. The essence of the argument stands this aircraft is too little to late with the US DoD leaning on so called allies to buy this aircraft with each being massively expensive and obsolete within a few very short years.

We need to purchase F-35A for the RAF to properly replace Tornado GR4 and not have to rely on Typhoon FGR4 for strike. F-35B should be soley under the control of RN FAA!

The F35 programme is behind in some areas but ahead in others, that’s what happens when you bring an aircraft in to service whilst still testing it. As for designing a 21st century Harrier that was never a possibility as it had reached the limit of upgrade with the GR9.

What part of it being an initial buy building up to 48 aircraft did you miss? Yes, there’ve been cost increases, delays and bugs. That pretty much puts it in the same class as all previous aircraft that were ground-breaking, then. As for an upgraded Harrier – seriously? Subsonic, non-stealthy, limited payload… any attempt to change those would result in a completely new aircraft anyway. And they’re certainly not going to withold software to keep us compliant, as we could pretty much ground their whole flees if they did – we make 15% of every single F35 and HALF of… Read more »

This aircraft, a bit like the banks, is now too expensive to fail.Too many politicians have staked their reputations on it…..reputations however don’t help it fly…..

Either we shoot ourselves in the foot or we sell ourselves down the line, we are incapable of standing on our own two feet and doing what’s best for Britain. We have the ability to create the next of plane to replace the Harrier! Or: We could have adapted the Typhoon (which has cost Britain billions in development and purchase) to fly off aircraft carriers, so we are told. Which ever way we could have chosen, would have been a world beater! But again like the TSR2 which was way ahead of anything the Americans or the Russians had, we’ve… Read more » 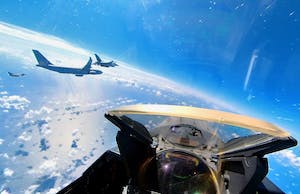 April 29, 2022
Typhoon jets and a Voyager tanker have flown to Portugal to demonstrate Britain's ability to project airpower over the Atlantic and Western Mediterranean.