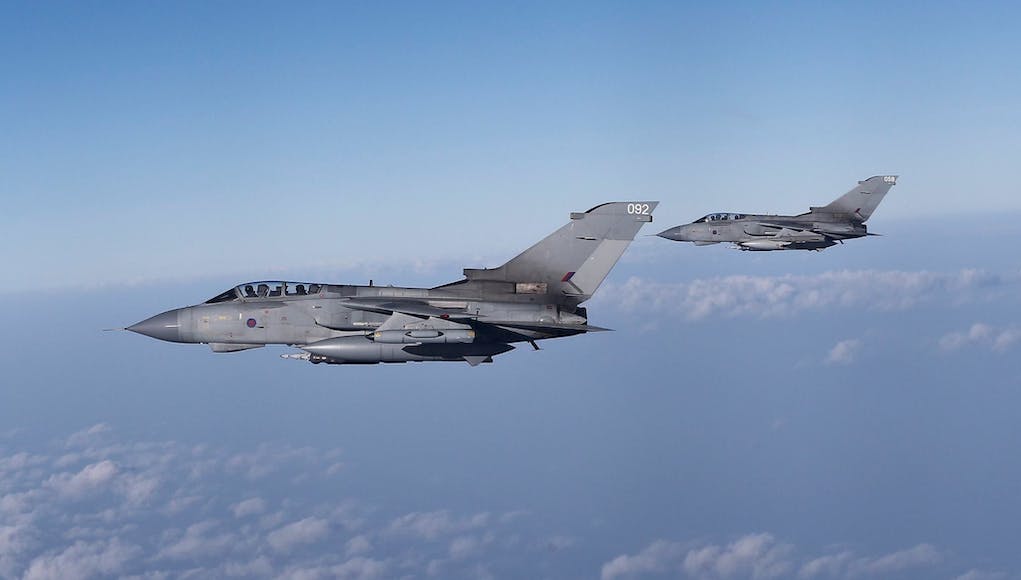 Figures have also shown that British combat aircraft have fired 26 of the highly capable Brimstone missiles at targets in Syria since operations began.

Brimstone is an air-launched ground attack missile developed by MBDA for the Royal Air Force. It was originally intended for “fire-and-forget” use against mass formations of enemy armour.

Experience in Afghanistan led to the addition of laser guidance in the dual-mode Brimstone missile, allowing a “spotter” to pick out specific targets when friendly forces or civilians were in the area.

The Ministry of Defence recently revealed that British aircraft have carried out more than a thousand air strikes against Islamic State in Iraq and Syria, without civilian causalities.

While military operations are never without risk to civilians, UK forces strive for the highest level of accuracy. That is why the RAF uses precise, low collateral weapons systems like Brimstone supported by thorough intelligence.

According to Mike Penning, Minister of State for the Armed Forces:

All UK strikes, in support of the Coalition, are undertaken as part of a rigorous targeting process, which assesses the situation before, during and after a strike to ensure adherence to the Law of Armed Conflict. It should be noted that frequently sorties will be flown in Syria with weapons released that may also have had weapons released in Iraq.”

Sorties can be conducted without weapons releases for multiple reasons, varying from the provision of intelligence, surveillance and reconnaissance in order to support forces on the ground, to development of future striking opportunities.

The number of each weapon type released is as follows:

The following number of Brimstone missiles have been released by UK aircraft engaged on Operation Shader in Syria alone.

The Ministry of Defence has said the UK has carried out more than 1,000 air strikes against Islamic State in Iraq and Syria reportedly without causing any civilian casualties, over 3,000 armed sorties have now been flown since operations started.

In September 2014, Tornado GR4 strike aircraft of No. 2 Squadron began flying armed sorties over Iraq in support of Operation Shader, the UK’s contribution to the Military intervention against the Islamic State. On September 30th, the aircraft flew their first bombing raids, engaging a heavy artillery position with a Paveway IV laser-guided bomb and an armed pickup truck with a Brimstone air-to-ground missile.

Brimstone is the preferred weapon for these kinds of targets because it is the only air-launched low-fragmentation fire-and-forget weapon that is effective against moving targets that the allied inventory possesses.

In December 2015 the UK started using Brimstone missiles in Syria.

Around £10 million of Brimstones from the RAF stock were sold to the Royal Saudi Air Force for use on their Tornado jets. In April 2011, the RAF’s Assistant Chief of the Air Staff Air Vice-Marshal Baz North reported that the missiles were “being sought by both the United States of America and the French” in the light of Brimstone’s success in Libya.