There has been an increase in the frequency of British RC-135 aircraft being deployed to the Black Sea region near Ukraine’s border with Russia.

British surveillance aircraft being over the Black Sea near Crimea isn’t unusual but we are seeing a significant increase in the frequency of the flights over the last few weeks. American assets are also present.

It should also be noted that these flights are designed to be visible so that the public and Russia know they’re happening. 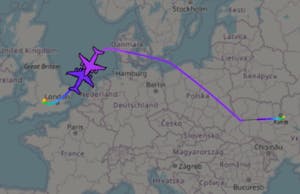