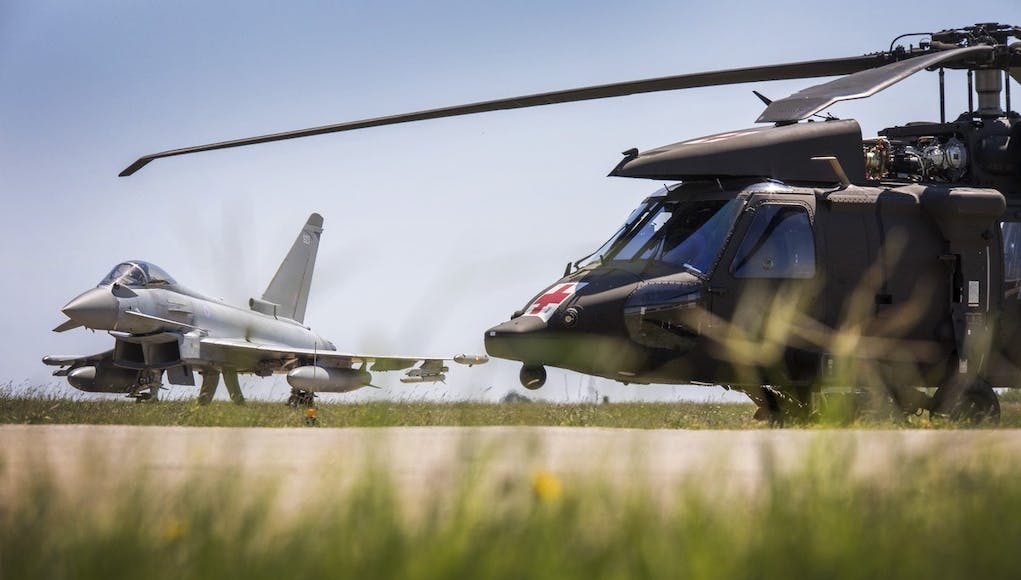 According to an MoD press release, personnel from 135 Expeditionary Air Wing (EAW) have been deployed to Romania to conduct the NATO ‘Enhanced Air Policing’ mission. The EAW personnel work and live alongside members of the Romanian Air Force and the various US Forces who are also operating out of Mihail Kogalniceanu Air Base.

Squadron Leader Andrew Blyth, is the deployed RAF Doctor attached to 135 EAW. He liaised with the US Black Hawk Squadron during the planning phase for the Joint Exercise. He said:

“This exercise has taken a lot of planning from all sides, but the value of training closely with our US allies in a realistic mass casualty scenario makes it all worthwhile. Interoperability between the UK and US Medical teams has been instrumental in the past, and maintaining the ability to work together is crucial for potential future operations.”

135 EAW and US Forces personnel grasped the opportunity to train together in this simulated Medical Evacuation (MEDEVAC) Exercise, to provide realistic training based on integration between the two NATO forces on previous operations.

A Typhoon pilot from 1(Fighter) Squadron deployed as part of 135 EAW, provided Close Air Support, whilst 135 EAW personnel acted as wounded soldiers and air crew on the ground. The deployed RAF Medical Team jumped on board with crews of US personnel from two HH-60 Black Hawks, to intercept the “Crash Site”, attend to the staged Casualties and finally evacuate them to the Medical Facility.

Captain Craig Meree from the US Marine Corps, better known by his call sign “Sensor Bob”, acted as the Primary Liaison Officer between the US Forces and the EAW during the exercise. He said:

“I’ve worked with the Brits on previous operations, such as in the Gulf Region.  There is a very strong relationship between our two nations, and the success of this exercise is proof of that. We trained each other in different techniques, tactics and procedures, and worked together to accomplish our shared mission to secure the aircraft crash site and evacuate the mass casualties to safety.”

What else do we have? Apache I guess but they need to be forward deployed. It doesn’t look like the F35B will be up to much in that role either.