US Navy destroyer USS McCampbell and Royal Navy frigate HMS Argyll, conducted a series of exercises from Friday to Wednesday “to address common security priorities” in the South China Sea, the US Navy said in a press release.

The US frequently holds freedom of navigation exercises in the South China Sea to emphasise the freedom vessels have to travel in the region, but the UK has only recently started to take part in these exercises.

It is understood that China dispatched the frigate and two helicopters to challenge HMS Albion as it sailed through the disputed sea. Local media report that both sides remained calm during the encounter and the Royal Navy assault ship continued on course despite protests from China.

According to the US Navy, Argyll and McCampbell conducted ‘communications drills, division tactics and a personnel exchange’ during the week, to help “develop relationships” between the two navies.
“Professional engagement with our British counterparts allows us the opportunity to build upon our existing strong relationships and learn from each other,” US Cmdr. Allison Christy said in the release, adding it was a “rare opportunity” to work with the Royal Navy.

If China attacks Taiwan, what would Britain do? Would we assist any US operation? If so, with what? Or would we sit on the sidelines? How would we explain that to Taiwan, USA, Japan, S. Korea, Australia & the UN?
Is any of this thinking going on in Whitehall?

Do you think any one them will take action? Can’t be sure at all, very close to mainline China and with Trump in the Whitehouse all bets are off.

Any navy entering those waters would likely face a serious barrage from land and air so I can’t see anyone challenging China if they move for Taiwan.

Action is not just military.
It could be economic sanctions against Chinese Telecom & Nuclear firms in the UK. It could be a ban on Chinese purchases of UK infrastructure or tech firms.
It could be a restriction on Chinese students taking part in cutting edge research at UK universities.

Rob
“With Trump in the White House all bets are off.”
How do you figure? President Trump has increased the sales (read aid amounting to gifts) of arms to Taiwan. Has increased the amount of Freedom of Navigation patrols. Along with being the first President since Nixon to take the President of Taiwan’s congratulatory phone call personally after the elections in 2016. This is combined with much more contact between Taiwanese officials and their American counterparts than there has been in decades.

Bit of a leap from that to war with China in their backyard.

We have no treaty obligations with Taiwan so why would we intervene,I doubt Japan,South Korea would either.I don’t see China as a major risk to us, not in the way Russia is.
Freedom of navigation is a different issue and all countries should resist any other trying to grab control illegally.

China will not risk its economy I’m sure they would rather use soft power to slowly change Taiwans elligence.

throw comrade corbyn into the mix and we’ll all be stuffed.

So sad. The RN should be the pillar of our armed forces and have the greatest funding.

£39 Billion waiting to be handed over to the EU, around £18 Billion handed out last year alone in foreign aid, and an additional £12billion pounds per annum once we leave.

What European country would be so foolish not to strike a sensible trade deal with the UK with Russia breathing down their necks if we announced we were going to greatly increase our defence spending?

I think its called leverage!

Start spending some of our foreign aid budget more wisely to start with.

Cut the aid budget in half! Oh yeah there are laws stopping this! Well we should spend 90% of it at home then.

Militarily no one can stop China taking Taiwan if it wants not even the US but it would be economic suicide right now so they just need to wait. Wouldn’t take long to take out all military infrastructure with targeted strikes then a naval blockade to starve them into submission, but I think in the long run the Taiwanese will end up like Hong Kong without the use of force I can’t see any other way

Study amphibious landings and the logistics they take. Then study the geography of the Island of Taiwan. The term is blood bath. A naval blockade only works if you have COMPLETE superiority of force. In case you haven’t noticed the Chinese don’t. If the US intervened the Chinese would be trying to enforce a blockade while being in waters infested with submarines. They would be trying to land troops with landing ships that are in range of anti-ship missiles the entire for virtually the entire journey from mainland to landing. The smaller landing craft and amphibious vehicles the Chinese hail… Read more »

One of the few decent articles I’ve seen from The NY Times.

If PRC invaded Taiwan, Millions would be executed & the rest put in “re-education” camps. That’s Chinas form. Just how far will we let PRC go if they embark on regional colonisation? If we do nothing or next to nothing they’ll feel free to do whatever they want. Good to see USN & RN contesting Chinas annexation of these islands, but are we doing the same with Russia in the Crimea & sea of Azov? WW3 may be on the horizon, hopefully just a Korean war in the modern day rather than nuclear armageddon, not due to Brexit, but by… Read more » 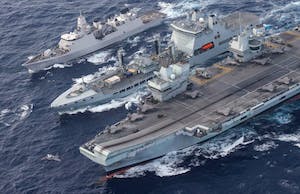