Two quick reaction alert Typhoons from RAF Coningsby have conducted a scramble exercise with their French counterparts, where they worked together to intercept, identify and escort a simulated enemy aircraft.

The Royal Air Force say here that this is part of a regular series of exercises to ensure that fighter jets on both sides of the Channel are always ready to respond and operate together at a moment’s notice.

“The RAF and French Air Force pilots were given no notice and had to launch their aircraft within minutes. As part of a coordinated response with specialists across both air forces, they were then required to intercept, identify and escort an aircraft simulating a threat from a foreign military.

Initially the French Rafale / Mirage 2000 fighters escorted the simulated enemy aircraft through their airspace. As the enemy aircraft began to approach UK airspace, the French air force conducted a handover of escorting duties to the RAF Typhoons. This required close cooperation with multiple agencies to ensure a safe and seamless transition.

Later in the exercise the enemy aircraft turned back towards France and the French Air Force resumed escort duties. To ensure the fighter jets could remain on the task, an RAF Voyager was launched from RAF Brize Norton to provide air-to-air refuelling for the jets.”

The RAF maintains a pool of quick reaction alert Typhoons at readiness 24 hours a day, 365 days a year to respond to intercept, identify and, if required, intervene unidentified, uncooperative, or un-notified aircraft approaching the UK.

You can read more on this story from the RAF here. 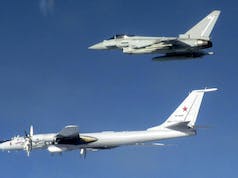 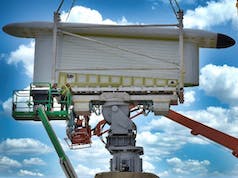 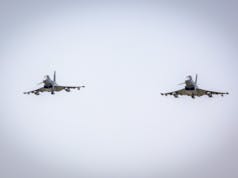 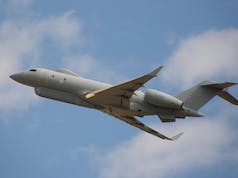 The US Air Force is replacing the F15C with 2 seat F15EX. And the French maintain a combat capable 2 seat version of the Rafale. The USN also have 2 seat combat capable F/A-18Fs in vast numbers. Point is the retirement of the 2 seat Typhoons seems premature, I can see a requirement for this small fleet to be upgraded and put to use as aggressors/trainers/sead etc. In some situations I see the WSO as beneficial.

The two seater Typhoon has never really been front line.

So all the usual arguments about orphaned types come out. It is very out of date tech and will be totally outclassed when the new Captor radars are fitted to T3 etc.

The F-15ex while having 2 seats will only be using one seat for its F15c replacement missions. It’s main mission is air defence over the USA. The second seat is just left in as it was designed that way.
Now will it stay that way who knows but that is the current plan.
I think the airforce is already trying to get less of the ex version.

I read a most interesting article last night regards how Serbia is in the market for a new fighter aircraft, current favorite to win the contract is France with the Rafale , followed by the British with the Tranch 1 Typhoon they are going to get rid of. The question I have to ask is this a good idea in light of the very strong links between Moscow and Belgrade.

It’s unthinkable UK getting rid of Tranch 1Typhoons with what’s going on ,just can’t get my head round HMGs been hell bent on cutting back over the years. Not even the war has changed anything 🙏

Couldn’t agree more with your point Andrew- the move makes no sense at all! Clearly the MOD is seeking to avoid the cost of a mid life upgrade by retiring the Tranche 1 – penny wise and pound foolish .

I would prefer even 12 new typhoons if the tranch 1 are to go.
The government need to be careful to keep the workforce busy until tempest is ready to roll out. Maybe there is a plan already to keep staff but would hate skilled workforce sacked only to realise they can’t build tempest in time. VboatstoAstute take 2

I think 12 new Typhoons is a splendid plan MS.

The MOD stands for Moscow On Duty; dont you know?

I was equally surprised at this news. Serbia? Given top European fighter jets. They just got Chinese SAMs delivered. I wonder why they don’t want to go down the Russian or Chinese route for aircraft. The french are welcome to the deal. 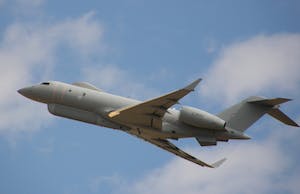 June 15, 2022
Britain’s retired fleet of Sentinel aircraft was sold to the U.S. last year, one of the type has now been spotted in Arizona.