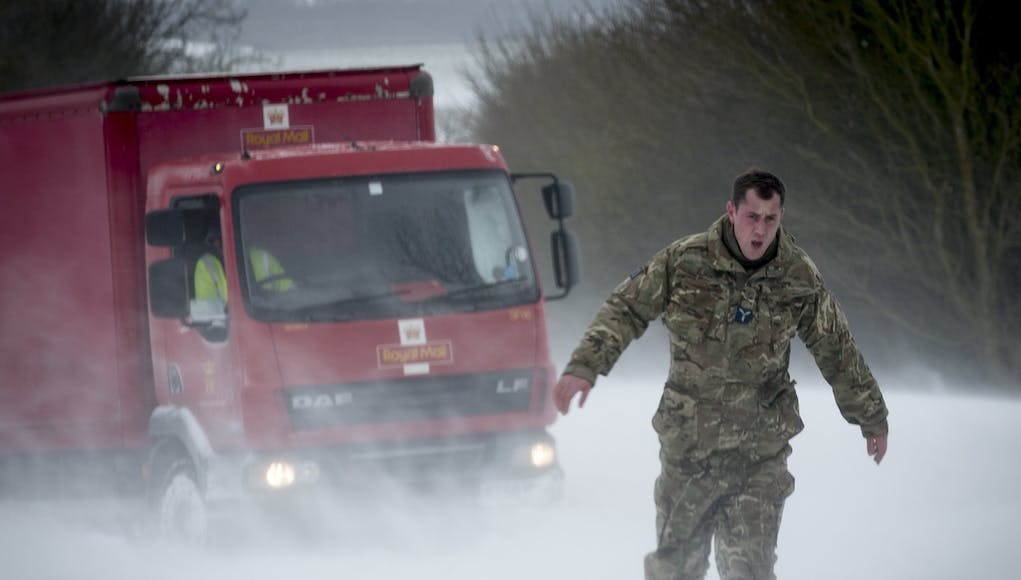 The British Armed Forces are assisting the emergency services to help people affected by the extreme weather.

The military has been using vehicles and personnel to transport essential NHS staff to hospitals and vulnerable people in the community. The military has also been supporting local police forces to assist people stranded on motorways.

The Defence Secretary has met with soldiers from 1 Royal Irish, who have been carrying out vital work transporting health workers in the Shropshire area, which has been hit by heavy snow.

“Our Armed Forces are doing an incredible job up and down the country, helping the emergency services, local authorities, and the NHS supporting those in need.

From Scotland to Cornwall, more than 100 personnel from across the forces are making a real difference in getting nurses and doctors to vulnerable and elderly patients, and helping rescue those left stranded in freezing conditions.

I pay tribute to their professionalism, dedication and sense of duty. They are proving once again that Britain can always depend on our troops to protect us no matter the time, no matter the place, and no matter the problem.

I witnessed for myself the vital role they are playing in helping the British people during the treacherous weather which has caused so much difficulty for so many people.

I am extremely grateful for all that our personnel are doing and will continue to do over the weekend – and I want to thank them for answering calls for help across the country.”

It is worth noting that, as per other public services the military do charge any other public sector organisation that sakes for assistance, so if a hospital requires staff moved that hospital pays out of its budget. As hospitals generally have contracts that pay them a fixed amount for a specific procedure ( with no extra money for events like this) it inevitably means a reduction in funds that NHS trust will have avaliable for patient care. This slows down and reduces potient requests/ responses from the military to civil contingency issues like this. Unfortunately our government does not do… Read more »

Unfortunately the weather situation was not properly planned for. Each county Police Force must ask the the Military for assistance, rather than it be a given. It seems the Police are always very reluctant to ask for any Military help as it puts them in a bad light. This decision is absolutely bonkers for instance RAF Benson have a number of BV vehicles which they were willing to use to help the local community, but the Police said they weren’t required. It seems the only time when the Military are used is in dealing with a terrorist situation. They are… Read more »

That list hardly come across as “massive” to me as in the headline but well done of all involved and I’d expect nothing less of our forces personnel.

I believe some of the personnel of RNAS Culdrose were out using their personal vehicles to help nearby communities and those stranded in the snow as well.

The costs of using a few dozen military vehicles is insignificant to the NHS. The NHS has literally thousands of ambulances, cars, lorries etc so the transport costs are negligible in the big scheme of things. I would of loved to see some all terrain Vikings used. That would have been good news. They could have rescued all those idiots that ignored the red warnings from the met office that indicate likely loss of life if you go out in this weather. There were loads of stories on the news of idiots that needed rescuing often with their children with… Read more »

Yep lots of total plonkers also not insured to drive in red warning areas. I partially blame the authorities, we should have made it very clear via public service announcements that. Movement in a red weather event puts you in apsolute danger of immediate harm or death and the emergency services will be unable to respond and drag your ass out of danger. We should have also told those at risk to prepare to self care for a time and the public to only call on emergency services or the NHS if at risk of significant harm and or death……… Read more »

I am sure Mark Sedwell and his cyber warriors would have also been on hand to help, then again probably not.

Once again with very little fanfare men and women of the military quietly going about their business helping communities whilst policy makers silently go about trying to work out ways to reduce their number.

on the days where required i am sure most military personnel would have been in barracks watching tv or other type of event, therefore it seems fair that they be called out to help. also this should not cost the other services money as the troops are there to serve their country.