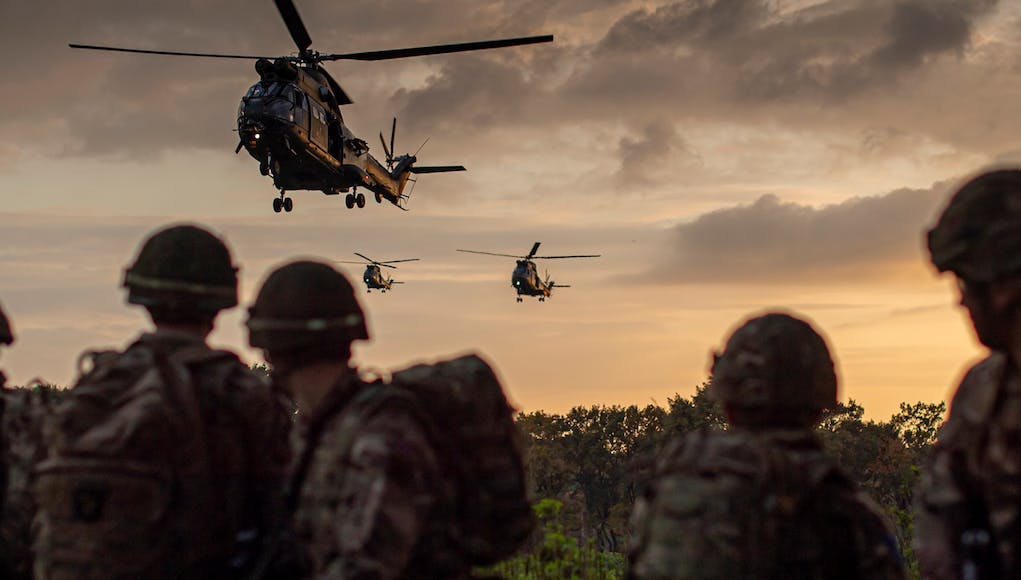 “Troops were lifted from a landing zone set up on sports pitches, which tested 13 Air Assault Support Regiment Royal Logistic Corps on how they run marshalling areas to load helicopters. The paratroopers of 2nd Battalion The Parachute Regiment were landed in Friday Woods, practising getting on and off helicopters in tactical conditions. For the helicopter crews, the training gave valuable experience in formation flying and moving personnel.”

“This exercise has been a great opportunity to bring the RAF’s support helicopters, the paratroopers they transport and the AAC Apaches that escort them together to practise all the individual skills that go into making it work.”

I’m glad they’re practicing, and I’m quite sure British airbourne troops are good. But DO we really, genuinely have a truly useful airbourne force anymore, or is it more of a 75th Rangers-style SF support unit? I’d be genuinely surprised if we could move a decent sized force in one go with the amount of airlift we have available.
I may be entirely wrong, and I truly hope I am. But not heard much about it at all recently, which can often mean there’s not a lot to shout about…

The Parachute Regiment already supports UKSF, through 1 Para, which forms the bulk of SFSG, though that is entirely separate from our air landing forces. The other two battalions, 2 Para and 3 Para, rotate into readiness as lead of the AATF, with other elements of 16 AA Bde. A 3rd Battalion, 2 RGR, is also in support as an air landing formation. So nothing substantial. Certainly not brigade strength in one go. Funnily enough air lift is an area the UK is reasonably well resourced, with the RAF SHF, 22 Atlas, 14 Hercules, 8 C17, and the Voyagers. Airborne… Read more »

Thanks Daniele, I was hoping yourself and/or Airbourne would respond!
That’s frankly more personnel than I was expecting, I’m glad to say. Are they effectively light infantry, or do they have some mechanisation at all? I take your point about fixed wing airlift, but my understanding is that most tactical troop movements would be by helicopter, no? That was my real doubt about being able to move more than 100 soldiers at a time around. Maybe (hopefully) I’m also wrong about that?

The RAF has 60 Chinook and 23 Puma. I can’t think of a scenario where we would be deploying more troops than they can carry (admittedly they wouldn’t all operate together) without mechanized units. Any large scale assault would surely be by both land and air so the troops are properly supported. The type of scenario where it would be a helo only incursion would likely be far smaller and backed up by Apache, for that we seem to be well equipped.

Fair point Rob, although I would ask where and how those airlift choppers are distributed (plus how many are in maintenance etc.); If they aren’t available in one place at one time, then they can’t do the job.
That said, that’s more than I thought to be honest, so it would seem we’re in better “airbourne” shape than I thought we were- which is a good thing!

We can certainly move more than 100. Yes the battalions of 16 AA Brigade have Jackal and Supacats but little else I’m aware of. The army and the RAF practice air landing at Keevil, an old airfield near Lyneham, and sometimes Macrihanish. We have the expertise, as always, and the movement people, what is lacking is fire support. 16 AA had all it’s supporting Combat and Combat Service Support units reduced. They all exist, but all have had batteries and companies removed, so the Brigade cannot deploy as a full formation with all 3 battalions supported. I’d wonder though, does… Read more »

Noting your experience of all such things, I am surprised that you are allowed to post on a little forum such as this. What sort of rank do you hold if I may ask?

Oh Mike. Thanks. But I have no experience whatsoever, and have never pretended otherwise.

I’m not in the armed forces or the Mod.

I’m just a researcher who’ loves our military, and has studied it for 31 years.

All the stuff I waffle on about is open source information. Some isn’t, but I don’t post that sort of thing.

Airborne, BV Buster, Gunbuster, and others are the main men. I’m a nobody, who just admires and loves our military and wants it well resourced.

Don’t do yourself a disservice mate, you don’t need to have served to have knowledge! You are always clear where your knowledge ends, and bow to the experience of those who have served. That’s all anyone can ask for.
Like you, I was never in the armed forces, but do have enormous respect for them and a great deal of interest. I just need to work a bit on the knowledge front!

Just like me then mate. Good to meet you Joe. Hope to see you posting more.

Daniele: almost everyone who posts and reads here respects your knowledge and ability to clearly explain operational and equipment issues.

Daniele is a five teacup armchair general, and one of the best

What rank are you Mike? the getting jealous of someone’s superior knowledge brigade?

Daniele is a friggin ninja! He needs to do a job share with the CDS and start pointing them in the right direction.

Where do I report?

We’ll put you through the UKDJ version of JSCSC mate, don’t worry.

So much to learn from people on here, for everyone, in all manner of subjects, not all of them military!

I do think another at least 6-8 more a400m Atlas would be a wise addition.
We have a lot of lift, but if we are starting to increase forward basing plus moving IS0’s containers for the RN, possible helo refuelling, supporting strike brigades, emergency resupply of carriers the fleet will be extraordinarily busy.

As normal Daniele has squared you away with the right info. We do have a full Battalion in the lead role, with a number of supporting arms (Bty of guns, Sigs, medics etc) and theoretically the full Battle group can deploy by parachute! However, we need to be realistic, and understand not only do they now very rarely jump as a Battlegroup, including heavy drop, but we don’t have the air assets, or current concept of operations to do so. The reality is if an AABG needs to deploy you will have PF platoon lob in first, recce and mark… Read more »

Great to hear that I’m concerned for no reason!
I guess there’d be very few situations that would require a full brigade-sized deployment, so to a certain extent it’s “OK” not to have those enablers, but certainly less than ideal.
Thanks for the knowledge you bring to the table.

They are moving the Parachute Regiment and the RM 3 Commando towards a more “Raiding Force” posture, as we see in the latest announcements. Which in my opinion also gives a reason for them to justify cuts, which I oppose.

I can see the logic in that, from the point of view of efficiently using the forces we have. But that shouldn’t mean that there’s a real loss of capability- those bits that are removed from the Paras should be integrated elsewhere. I’m with you that we don’t have enough left to cut. We can’t have a smaller armed forces than we currently have and maintain our position globally that we should be maintaining- particularly post-Brexit. It’d be great to see an increase in the defence budget, but that won’t be happening. Frankly though, it would appear that money is… Read more »

I think we are generally on the same page. I always argue for a Navy / Air force / Intelligence / SF centric policy. As without them, being an Island, if the UK has a part to play in the world geopolitical game, which it most certainly does, the army can do nothing. The cuts have gone beyond ridiculous, and well into the bone in many areas. Transparency in the MoD? A look at their published equipment plans for the next decade show all you need to know on that. So little on how many, when, where. Just blocks of… Read more »

It sometimes amazes me that the US has better accountability and oversight of their military budget than the UK does, I’m not sure why but it just seems to me that it would be the other way around. Even with America’s well publicised excess and “pork barrel” politics, I do feel that their more transparent system probably keeps them more honest and efficient than the UK. I know that lots of people talk about overhauling all kinds of things in the military, but I’d say the whole budget management and oversight thing should be very near the top of the… Read more »

I would rather they are small than large and with a lowering of standards.
Having said that, DSF has grown since the 80’s when there was just the SAS, Det, and the SB Squadron.

For sure. Are the SFSG technically included these days? That would account for quite a lot more head count and thus cost. Still, £2Bn would get them an awful lot of nice kit and fun training. Maybe they’re all getting C8s and those cool NVGs that the SEALs used when they took out Bin Laden?!

I believe they are included yes, alongside 18 UKSR and the JSFAW.
The JSG I don’t know.
The Reserve Regiments of SAS are no longer included.
The DSF is now 2 Star, reflecting the increased size of the directorate.

Maybe silly question, why didn’t the UK ever make BMD type vehicle for your airborne soldiers? Not worth the cost for 1 brigade, needs to many aircraft? or just different idea of deployment/use?

We had light CVRT recce vehicles able to be dropped, but the part of the concept of ops during the cold war was that 5 Airborne Brigade would deploy to the rear of the BAOR armoured Brigades and secure the lines of communications, supply and fill gaps where the pesky Russkie juggernaught may break through (a role which 24 Airmobile Brigade became better suited) and deploy to NATO flanks as when needed. Light role manouverabilty was a better and quicker option than chugging about on tracks. Plus the fact it would be a suicide mission to paradrop a full Brigade,… Read more »

Great. We proved that we could ‘bring together’ 7 helicopters to transport 100 troops in an airlanding exercise which funnily enough is exactly what these loggies are trained to do. Tea and biscuits all round. 16 AA does not need revision, or any alteration whatsover, but its seemingly inability to prepare for a battalion insertion let alone a brigade assault (ok, an unlikely scenario) either by para or airlanding is disturbing. It’ always a company strength ex. We do have the air assets available to mount bigger training exercises and the ability to reinforce troops on the ground with heavier… Read more »

But we do need to turn up. Challenger hasn’t been deployed in any numbers since Iraq and that took ten weeks. BAOR was a throwback to occupation of Germany and should not be our role now that NATO border has moved east. Strike/ deployment ability should be the army’s priority. RAF and Navy should be what we can give to NATO effort.

Wahey!! Friday woods isn’t that far from my house, when I was a child, we used to go there a lot with the army cadets and for a laugh as well. I see Chinooks, Apache and Puma’s pretty much daily here……it’s great to see them all!!