The British Army say that the ‘Multi-Coloured Camouflage Scheme’ (MCDCS) project was launched as a result of troops’ experience in Estonia, lessons gleaned from the Royal Tank Regiment’s ‘Streetfighter’ experiment, and a “long-recognised need to hide, deceive, and survive on the modern battlefield”.

The Army say that the experiment was tested practically by soldiers based at the Army’s Armour Centre equipped with various types of sensing equipment as well as the naked eye and binoculars.

“We know from operational analysis that, in combat, tanks are destroyed from surprisingly short range and that the preservation of our battle-winning capabilities is vital to success.  MCDCS is the product of a joint project involving the Dorset-based ATDU, the Defence Science and Technology Laboratory (DSTL), and the Tank Museum. The project was devised to create a camouflage scheme which would decrease detection, both by the human eye and artificial intelligence-enabled targeting tools, with a goal of tricking the enemy and creating an advantage for the camouflaged vehicle.

Using archival information from the Tank Museum, including the camouflage schemes of the ‘dazzle’ ships of the First World War, the paint and deception projects practiced in the Western Desert in the Second World War, and more recent paint experiments in the 1960s and 70s, the main elements were established. DSTL were then able to provide state-of-the-art paint materials promoting low levels of radar detection and high heat dissipation to create the complete MCDCS.”

In tests, MCDCS drastically is claimed to have reduced both detection and recognition in critical short-range distances (400-1500 metres).

Is there meant to be a picture of a tank in that article? Because all I can see is some trees.

? Reminds me of Cyril Fetcher’s old sketch about a soldier in camouflage having a drink at a bar. Customers were stupefied when a pint of beer appeared to raise itself in the air and the contents disappear!

That tickled me, I have a vision of a guy constantly trying and then launching the model across the (probably his mum’s spare) room.

Now now, nothing wrong with having a hobby :-D. I’m even married and have my own house :-O

My 20+ CH2 will not be repainted in this pixilated fashion!

yes, I’ll think I’ll stick to something a bit simpler

Perhaps this is the promised C2 upgrade……could the casual observer tell?

The new paint IS the upgrade !

That is unexpected development, it must be said. Interesting though.

They can claim to have upgraded the C2 now!

Wonder if we’ll get matching uniforms? The Canadian Army has something similar here, looks pretty smart

Trouble is it makes the wearer look like a Picasso painting from his cubist period!

It was a joke.

I’ll get my coat

Looks like the Russian naval fighter scheme in a different hue.

To be fair, casual observation at least would suggest to me the pixel effects would be more effective against this sort of background than in the sky or sea certainly dazzle ships were never designed to not actually be seen just to obscure their true threat and the ability at the time to optically range them successfully the latter I guess has some relevance here perhaps.

Would look cool on recruitment posters too.

I wonder if the diffrent colours in the digital cam could be made up of diffrent types of material incoperarated into the paint, eg. the black could have a type of radar absorbtion rubber in it, a green a cermaic, etc. I know it might sound stupid but the idea would be to cause confusion to radar/IR as the diffrent colours with the diffrent materials would absorb and reflect radar and IR at diffrent wave lenghts.

I think that Describes Pretty Much what the Saab Barrucuda System Does.

I’m more interested in the second fot. Close up in fot 2 there is a wheeled vehicle – in photos 1 and 3 it disappears – that’s camo!

Should not the bloke in the turret made some effort

So the Russians got that one right as well.

Did they ask Minecraft over copyright issues?

Looks rather like that in use in countries in continental Europe.

For a paint job I’d rather have the 70 CH2 in storage up and running .

Colours are a good choice, but god damn another ‘digital’ scheme, the Yanks made the same mistake and it was found their digital camouflage actually made their uniforms stand out more. THERE ARE NO STRAIGHT LINES IN NATURE!!!!

So are we above copying someone else’s ideas if it works?

There we are, that’s the life extension completed under budget.

The interesting question is, are the spare parts (wings, bazooka plates, thermal sleeves etc), going to be supplied pre-painted, or will they be expected to be painted once they arrive at a unit. When working for MAN on the support vehicle contract, we discussed all these types of issues, and it may require the updating of parts list etc etc. I suspect as is always the case , that the support aspects for this haven’t even been thought about !!!!

If this is effective, one could create an active camouflage scheme quite easily using a “dress” of 16bit colour, e-paper (something, like the old kindles). A couple of cameras and a computer would read the environment and detect the palette most similar to those in a library, then switch the appropriate pattern on. Less Bond, more Chamaeleon. But, I bet it’d be effective and certainly cheaper than some of the cleverer schemes being dreamed up in research labs. Just a thought.

As with pixels on a screen or digital image, the squareness of the pattern blurs away quite quickly with distance. I find it fascinating that this, and even moreso the Army’s new battledress camo scheme, seem markedly more effective than DPM and the old cold-war schemes. When you look at units training in the UK, Cyprus, Canada etc, the “beiger” and less contrasting colours really do seem to blend into many different terrains in a way that DPM didn’t. Interesting that we’ve gone back to something much closer to the classic Boer War/WW1-era khaki, the first modern attempt at camoflage!

This is not the first time the British Army has had this.

I’m sure recall some Chieftains in the Berlin Brigades Armoured Squadron with that square style scheme during the Cold War.

Hello Daniele – Yes the Berlin Camo has been Honoured as Well 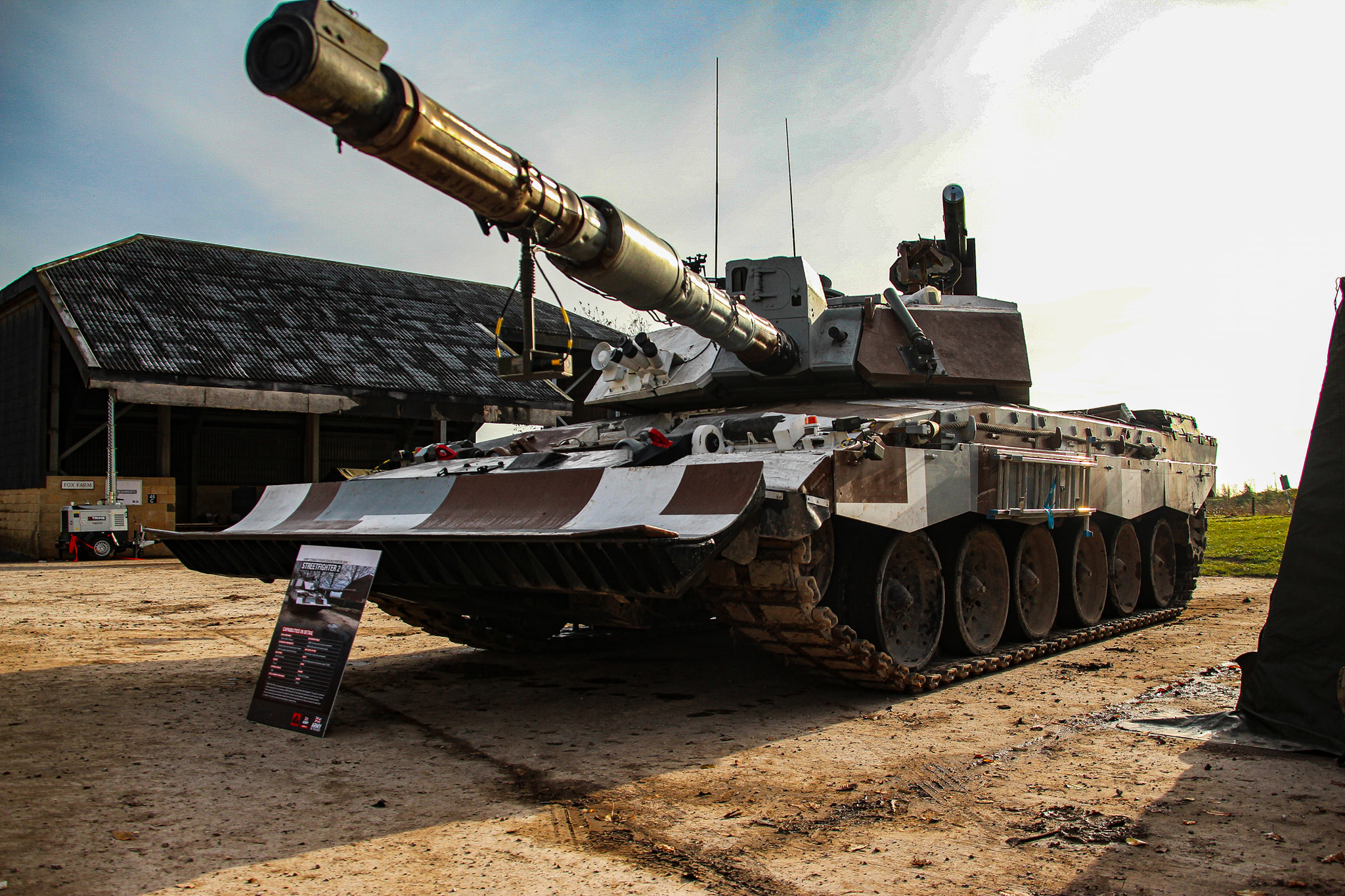 Granted, it is a bit different, I recall it was for urban ops.

Yep I think theres pic of that Berlin Brigade parade chieftains showing that paint scheme on wiki too.

Anyone know how the paint scheme is applied? Must be hand painted rather than spray painted? Time consuming to apply?

I can only guess but due to the Pattern id say it was Vinyls Applied over the Existing Colour.

As all our armour has been pale beige for so long, they probably all had to be re-painted anyway, so makes sense.