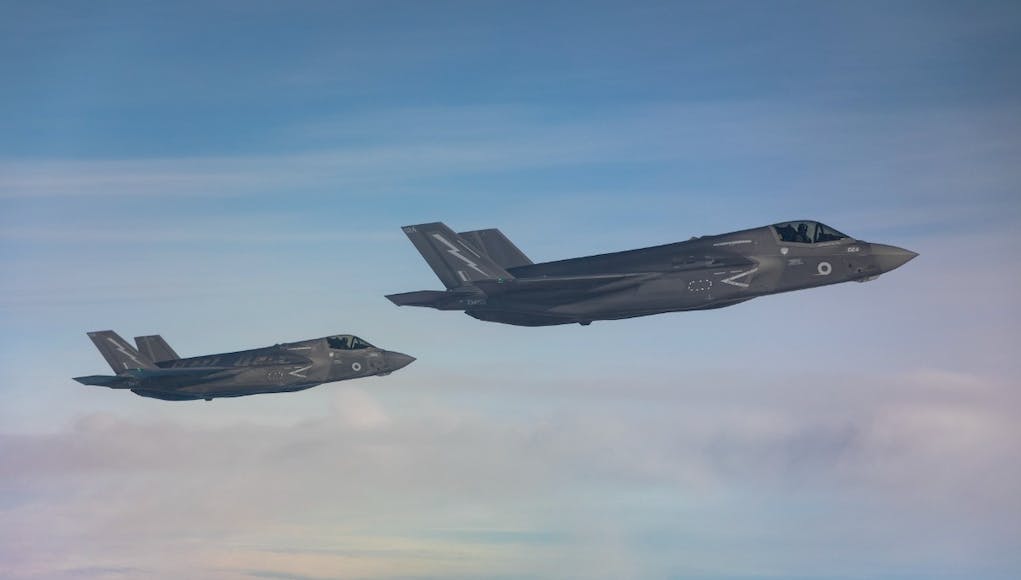 British F-35 jets have landed in Estonia as they prepare to undertake air patrols over Eastern Europe to deter Russia from taking any aggressive actions against NATO members.

According to a statement from NATO here:

“The F-35 Lightnings from RAF Marham, UK joined other Allied 5th Generation fighters provided by the US Air Force and the Royal Netherlands Air Force who are taking part in air patrols over Eastern Europe. This activity provides air policing of NATO airspace ensuring a robust and integrated shield for Allied airspace and contributing to the security of Europe.

This new deployment will see the aircraft based alongside Belgian F-16s where they will be better postured to support the ongoing NATO mission. They will join other Allied 4th and 5th Generation fighters carrying out patrols over Polish and the Baltic States’ airspace.”

“The F-35 is an incredibly capable and versatile aircraft. Operating alongside the Typhoons they are maintaining the integrity of the European airspace and contributing to the NATO Mission,” said Group Captain Philip Marr, Station Commander, RAF Marham. “The 5th Generation Fighter is a world beating aircraft which can simultaneously provide Information Warfare, Intelligence gathering and Air-to-Air missions.”

The Royal Air Force say here that the Lightnings from RAF Marham also joined the Typhoon jets taking part in pre-planned Enhanced Vigilance Activity, “a NATO led Operation initiated due to the unfolding events in Ukraine. This activity provides air policing of NATO airspace ensuring a robust response to the Russian aggression seen in Ukraine and further contributing to the security of Europe”.

Considering we have 24 in the UK what do you reckon? Total of 4 for this deployment?

Four would be the absolute minimum, depending on the length of the deployment there may be 8.

You know the Netherlands only deployed two I believe.

In April and May unless that has changed?

I’snt it rather odd that they never seem to mention the actual numbers being deployed?

Not really, as things stand why do a potential enemies intel gathering for them?

We mentioned the additional Typhoon numbers so why not the F-35? It would send a very clear message to the Russians surely.

“Four additional UK Typhoon jets have landed at RAF Akrotiri in Cyprus as part of efforts to deter Russia as tensions mount.”

I am sure not knowing how many F35s we sent would concern Russia more then knowing exactly. The F35 is a more sophisticated asset then Typhoon and capable of stealthy strike missions… more of a threat to Russia. The fact is we the public do not need to know how many were sent and the Russians by extension do not need to know.

“The F35 is a more sophisticated asset then Typhoon and capable of stealthy strike missions…” No longer the case, fortunately. Digital Means Adaptable “Importantly, the Typhoon’s advanced, reprogrammable EW suite allows the aircraft to react to a constantly-changing threat environment in ways that physical stealth cannot. Consider today’s threats. The latest surface-to-air missile systems are having their hardware regularly upgraded, are being networked and can change their behaviour almost instantaneously via software reprogramming. In short, they are constantly evolving, creating a dynamic and challenging threat environment. This means that the advantage of aircraft which use traditional physical stealth technology, which… Read more »

There is no comparison , F-35 is in another category altogether . Typhoon is an public works program pushing out antiquated irrelevant decoy targets that are too expensive and you would be better off with some cheap Loyal wing man craft .

“There is no comparison, F-35 is in another category altogether”

Correct, It will be of little use to us until the delivery of Block 4 software which is now scheduled for delivery in 2029 hence the reason the US is looking for a new 4.5 gen aircraft.

The Russians know how few we have just like we do; I don’t think this will bother them too much.

There again, they’ve made a royal pig’s ear of their air campaign thus far so maybe they will sit up and take notice!

Any 5th gen platforms will worry them as Ukraine has actually showed to the world that the modern Russkie mil is just as shite as the Cold War 80s lot! Most of their “new” and modern assets don’t seem to be what they claim!

Yes you only need a few 5th generation platforms to provider sensor synergy and information sharing nodes for all your 4+ plus aircraft to destroy an all 4th generation airforce before it really has the situational awareness to fight back.

In fairness the 80’s lot were probably better.

On a side note, i see that the French have withdrawn their engineers from the European 6th Generation fighter jet project n a row over work share. Geez, no-one saw that coming ﻿😆﻿

Hi Jack – shades of the original Eurofighter in the 1980s all over again!

What the French wanted most of the work load and manufacturing, that must be a huge departure for usual French negotiations.

Time to invite the Germans into Tempest ! cash to spend……..sorry…dont know what came over me.

No. The Germans join programmes wait until the design is ready to enter production then dont order the numbers they promised. Result= unit price increased for other partners. Keep Germany out of Tempest. We can sell them some as long as made in UK when the programme reaches fruition.
German defence is a mess. They are having to spend massively just to catch up.

Thats hillarious. The French will screw the Germans over. Take the technology out of the programme and design their own new Rafale2 to sell internationally.
They have form for doing this.

What is so frustrating is that NATO as such an advantage it could stop the Russian armed forces in there tracks and allow Ukraine to remove the invader. In really the is not about NATO not wanting to help or not being able to simply stop Russia in its track. NATO could and everyone would support it as justified. It would also re instate western geopolitical loss of influence and make China a lot more considered in any future aggression. But this is not about NATO conventional power it’s all about Nuclear Weapons and a conflict between nuclear powers. It’s… Read more »

I think the issue at the beginning was that NATO didn’t really believe just how useless Russian forces were.

After long drawn out wars in Sandy places belief in shock and awe had evaporated.

If the reality of the whole thing being totally blow in 12 hours or less had sunk in then a more aggressive approach might well have followed.

The loss of Russian conscript kids would have been colossal and terrible.

you may be right that the western decision makers just did not figure the qualitative difference in western military compared to Russia. We maybe need more faith in our own power and ability. After all the west was shocked just how behind Soviet hardware was compared to the Western forces in the early 1990s, Our own equipment has improved significantly since then T45 vs T42. Our SNN fleet of trafalgars were better than anything the Soviets but in the water and the Astutes are a step change above the trafalgars, all the Russian boats are either Cold War relics 30-40… Read more »

Is the UK deploying F-35s to Estonia and on-board HMS Prince of Wales at the same time?

No. There are no fixed wing aircraft on any UK aircraft carrier at the moment.