NATO say that visits with local military and civilian officials are planned in both Riga and Klaipeda.
“Additionally in Riga, SNMG1 is scheduled to participate in the flower-laying ceremony to commemorate the Restoration of Independence on 4 May. As NATO Allies, Latvia and Lithuania regularly host NATO ships for port visits as part of their routine presence in the Baltic Sea. These port calls allow the Sailors to experience host nation culture while conducting engagements aimed to increase working relationships and support interoperability among Allies.”
SNMG1 and SNMCMG1 are two of four standing maritime task groups composed of ships from various Allied countries, which form the core maritime capability of NATO’s Very High Readiness Joint Task Force (VJTF).
The standing maritime forces provide a continuous maritime capability to execute NATO missions across the spectrum of operations, demonstrate solidarity, and strengthen diplomatic and professional links among Allied naval forces.
0 0 votes
Article Rating

Given HMS Westminster is not long out of refit, the rust around the Gun platform was quite noticeable but then so was the age of the crew – saw no officers on duty and only met very young sailors… Quite shocked, to be honest. 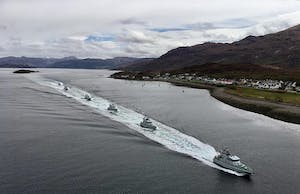