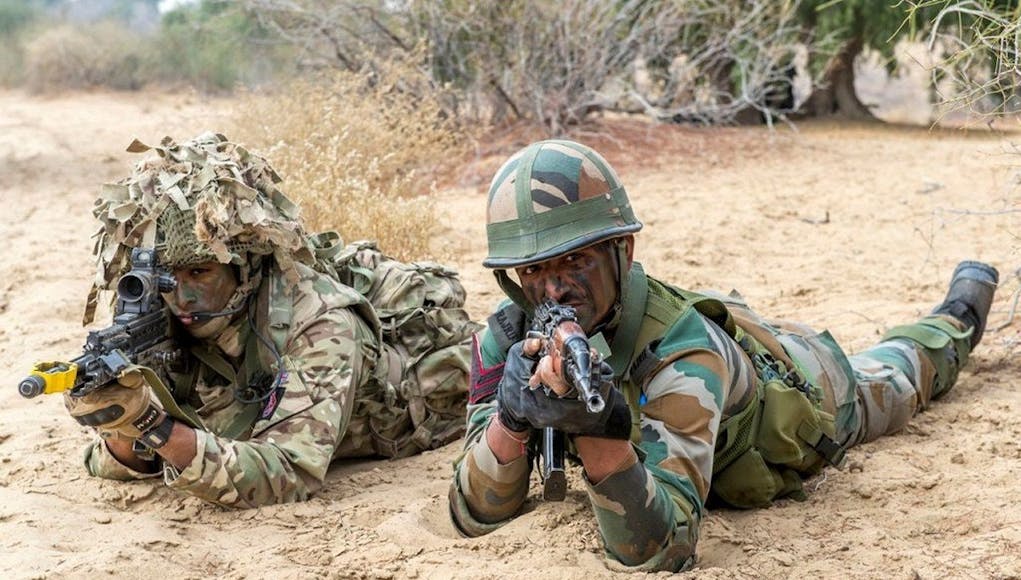 British and Indian troops joined forces for an exercise in order to ‘enhance combat tactics’ on both sides.

Exercise Ajeya Warrior is held in the UK and India alternately every two years, with the aim of pooling together ideas, enhancing interoperability and developing army-to-army links say the MoD.

“This year’s exercise was held in December at the Mahajan Ranges, in Rajasthanm, and involved the 20th Battalion of the Rajputana Rifles and the 1st Battalion the Royal Anglian Regiment (aka the Vikings).

The exercise began with troops participating in a series of familiarisation stands, lectures and physical training activities. From getting to know one another’s kit and equipment, to understanding each other’s experiences and tactics on operations, the exercise provided an excellent platform to learn from each other.”

Company Commander of B (Suffolk) Company of the Vikings said:

“Exercise Ajeya Warrior has been a unique and hugely beneficial experience for us. The hospitality shown by our friends in the Indian Army has been first class, and we are very grateful for the opportunity to work so closely together.

The ethos, culture and professionalism in our two armies is extremely similar, allowing us to form a very effective partnership on this exercise. I have no doubt that we would do likewise in the future if we were called upon to fight side-by-side in defence our two peoples and the democratic values we share.”

“Our armies have shared histories, shared values and standards and common goals. We face the same sets of threats, so opportunities like this are important for mutual understanding and for developing our ability to operate together. These events are the embodiment of the living bridge between UK and India.”

It took all of 48 hours for Pak to sign a deal with China after USA cut its aid links.

India in a fascinating position. It sees its threats as China / Pakistan – who are both friendly with Russia, which is India’s biggest arms partner.

Which way is she going to turn, or will she do a Turkey and plough a lonely independent furrow – she’s big enough to do that.

Ian wrote: It took all of 48 hours for Pak to sign a deal with China after USA cut its aid links. Its been on the books for a while for that to happen. The US sided with Pakistan during the cold war in which to offset India’s links with Russia. However after Pakistan as sent to Coventry (More like Bradford) after it detonated its nuke in 1998, it found a lot of doors closed except for one…China. The reason why China fetes Islamabad is simply to apply pressure on its only regional rival…India. That explains why Pakistan uses a… Read more »

Is it me or is that Indian soldier wearing a US Mk 1 helmet?!?! Ok we have our issues in defence but side by side, our personal equipment is so much better than in the Indian Army – that soldier looks like he stepped out of the 1980s!

Its a Model 1974 helmet made out of fibreglass. However that said the one before it was based on the MK1 and seeing as how they still use the Lee Enfield (But with a 7.62 calibre) for their reserves (Ishapore 2A1) I’ll put money on the table that the old tin lid is still in use.

FYI The Indians are currently replacing them with much more modern version.

The problem that India has is their MOD has a bad habit of starting procurement programs and never finishing them. Then instead of auditing and assessing what could be done to speed up and finish the program the government has a habit of ordering weapons and equipment as a stopgap. So what you wind up with for example is multiple service rifles in different calibers which also do not have the same manual of arms or maintenance/fieldstrip process complicating training. Another good example buying T90s at as full spec as the Russians ever export and then trying to develop their… Read more »

You sum things up very well Elliott, India has a totally chaotic and corrupt system of procurement. Multiple like for like systems of different origin doing the same job across all three services, just crazy!
If they ever went to war, their stores system would be in total disarray!

The best the UK and India can hope for is that we’re not enemies. Friends ? Allies ? Not in my lifetime.