The RAF say that this was the first time since 2001 that the RAF have flown with the Egyptian Air Force. The Typhoons were also joined on the exercise by F-16s from the Greek Air Force and US Air Force F-15s and F-16s together with C-130 Hercules and B-52s.

“Exercises such as Ex BRIGHT STAR 21 are vital as we develop and maintain interoperability with our coalition partners if the RAF is to be truly effective on operations throughout the Middle East.  Flying with other air forces requires extensive planning and the contributions of 903 Expeditionary Air Wing personnel have ensured that the exercise was safely and successfully completed.”

Exercise BRIGHT STAR is hosted in Egypt every two years and is run in cooperation with the United States Air Force.  This iteration took place in the North West of Egypt with the aim to test UK and partner forces interoperability.  The exercise was first held in 1980 to broker peace between Egypt and Israel, the most recent exercise before this year was held in 2018 as the 2020 exercise was cancelled due to COVID-19.

You can read more on this from the RAF here.

Too close to call, F-16 and Eurofighters both are really pretty aircraft.

Agreed, though I’m not sure I’m sold on the fuel tanks on the side of the fuselage

Like the Turks have on theirs, looks odd, wonder the extra range though.

I don’t know, has something F-80ish about it.

Interesting as Britain doesn’t seem to have had much in the way of any military cooperation with Egypt for a long time.

May be a complete coincidence but there was recently a rumour of them being interested in purchasing a few Typhoon’s (probably like Qatar to operate multiple fast-jet fleets as a means of gaining diplomatic/economic leverage) so perhaps this happening to give them a close up view of it in action!

Typhoons are off the table. Egypt already operates the Dassault Rafale F2. They have 24 of them which they ordered in 2015 or there abouts.

As I say it’s only a rumour that they are interested but it was around after they had signed a deal for Rafale which suggests they are looking at a mixed fleet of several western types, presumably for increased diplomatic and military sway.

FYI Egypt has 24 Rafale, and earlier this year ordered a further 30 Rafale F3R. In fact Egypt has expressed interest in getting more Rafale F4 in future, air force officials would like to have a total fleet of 72 to 100 Rafale

In which case maybe the rumours were to try to get a better deal than offered, the French aren’t shy about extracting extra value once they have their fangs in and think they have a customer over a barrel. They are similarly using their diplomatic support for Greece to try and extract top franc for their rather average frigate offer compared to the opposition which all look better on paper and certainly are bang for buck as things stand. Got to admire in a way their negotiation abilities deftly combining industrial, strategic and political elements, certainly when compared to our… Read more »

Sell them the tranche1 Typhoons ?

….with a nice upgrade package?

Tranche 1 is fundamentally different to the other tranches from structure to loom and a myriad of other bits.

You can’t just upgrade the radar to the latest and greatest otherwise you repeat all the integrations costs and trials.

They are fine forQRA though arent they so why scrap them?

Because it saves a ton of cash to pay for very expensive upgrades to the remaining Typhoon fleet.

With roughly half the airframe hours left in our T1’s!

“Airbus performed the upgrade at its facilities in Getafe. The enhancements included the introduction of hardware modifications, which support the Operational Flight Program 02 (OFP-02) developed by Spain’s Armament and Experimental Logistics Centre (CLAEX).

As part of the upgrade, the company integrated Tranche 2 and Tranche 3 equipment on the aircraft, including a computer symbol generator, digital video and voice recorder, laser designator pod and maintenance data panel.”

You might find this article interesting? Additional power and heat dissipation seem to be paramount on the next-generation engines.

I remember many moons ago someone from Eurofighter claiming that Typhoon upgrades would all be “software” the days of bending metal to upgrade military aircraft were over.

It was obviously a load of tosh.

European airforces seem to have been sold an expensive pup with the Tranche 1 aircraft if it can’t be upgraded like the later versions.

Egypt’s got a huge millitary and getting stronger. And is the only Arab state with spy Satelites. And they have far more fast jets than UK, and Army Far bigger, how capable are the soldiers though??
And Egypt was part of the British Empire, but how come they don’t blame everything that’s wrong with them on us British like INDIANs do??

“”Egypt’s got a huge and getting stronger. “” So, I’m a young sapper posted to a field squadron in Chatham whose main task is to support the Royal school of Military Engineering (RSME) with its courses , One such course is the young Officers course (YO) where newly minted officers tip up in which to learn the ins and outs of combat engineering , the course also attracts candidates from abroad. One such course and we had a candidate from Egypt. Unfortunately for me, he is also called farouk. He tips up the first week as a one badge wonder, goes away… Read more »

Interesting Farouk.
I didn’t even know Farouk was a Name mate 😆

As a child I hated it, (I wanted an English name) but as I got older, it grew on me, simply as it was different,( In Germany when I was asked my name, I would always receive a funny look as it is very similar to verruckt which means crazy.) But its not a common name and thank god I’m not called ‘Mohammed’

Interesting I always wondered what the story behind your name here. Good to know it’s truly your own.

Good on you mate, using your real name.

Nought wrong with it either. You might be “crazy”, but at least your not mistaken for a woman by the ignorant on a regular basis!

Maybe a lack of inferiority complex

Yeah, online Indians drive me mad, saying everuthing we buy is with Indian Money or that our Wealth today is because of India… we almost went bankrupt after ww2 and we built our wealth back up I explain but nope.. and we give india Hundreds of millions in Aid yearly. And India would be an even bigger dump today without British systems, laws, structure ect.. anyways off topic ooops…

I’ve visited India a number of times and understand you. I’ve never had any anti UK feeling whilst in India but online you get the the usual UK evil drivel – which is usually based on nothing more than what they’ve been told or read. You’ve got as much chance of discussing historical facts with them on the subject as with the average Guardian reader – facts are sacred to them until they show they’re spouting nonsense – at which time they abuse you as a non-woke idiot. Truth be told India under the British wasn’t perfect but it improved… Read more »

Yeah might read that mate. What gets me about india though is there’s literally tens of millions of starving homeless children with no parents on the streets but India will build pointless aircraft carriers and send rovers to Mars (or try) and buy more jets to go with the 500 odd they already have that they will prob only have for show and will never realy use properly! Allot of what India does is for show to try pretend it’s a proper serious country and is a world power but it’s not it’s just a regional power. I just answered… Read more »

For me India and many other countries buy weapon systems Aircraft,ships Tanks ,Artillery ECT like toys.But what gets me is there have kids staving on the streets .And reley on the West for Aid.

Got some real mixed views on this. Agree that in case of India the West should stop providing aid at the national level However in terms of the kit and military capabilities they are developing they do have some serious border issues to the North West and to the North East as well as having a massive marine zone to police. In terms of the British legacy in India yes there will be some positive remnants remaining such as railways etc but you can’t forget those railway’s were built to allow the occupying forces, the East India Company and the… Read more »

The railways did indeed have a military function but they also facilitated trade ( both export and imports – helping local businesses) and Indians used them in droves (local passengers were factored in most lines planning). But there was so much more to British rule – education, land ownership (i will try and find it but i gather pre-british India was fuedal and some provinces had only a few dozen land owners in total!). Then there is defence – the EIC is often quoted for its rapacity but the real pillaging was happening on the other side of the country… Read more »

A photo from 2007…. Lol…always others are the baddies ….and what what did the Romans ever do for us…nice aqueducts and sanitation but still an occupying force imposing it’s will. Suspect we will just need to agree to disagree. However, here in the 21st century when most on this site voice distrust of the EU and joy at separation the endeavours of the British Empire to effectively force create a large integrated unified trading block, an 18th / 19th century South Asian EU if you will, across religious and ethnic divisions are celebrated. Makes me smile. Have a great weekend… Read more » 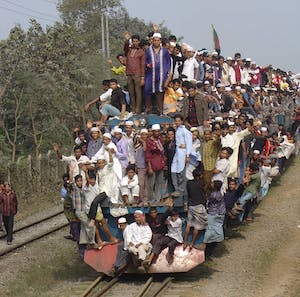 And for those same reasons is why China is still classed as a regional power, and not a global power. Despite the on paper numbers.

Whilst racism in any form or any direction is abhorrent, what younger people from the sub-continent often fail to understand is that without the British presence today’s India would not exist. The only common language on the sub-continent is English. Before there were a myriad of small states separated and segregated by an equal myriad of different languages & dialects. The two things that bound the sub-continent together were the introduction of a common language, English, and the building of the railways, both results of the British presence. we may have got many things wrong but Britain built the foundations… Read more »

It’s fairly complicated but Egypt was never really part of the Empire, it was a breakaway province of the Ottoman Empire under British Protection, then during WWI briefly occupied, then an independent Kingdom with heavy UK support and military presence. But never directly ruled by Britain.

Indeed important to make that distinction I think,

They did for a long time but when their relations with Russia went sour like for instance Vietnam often old ‘enemies’ become friends of convenience. To be fair Egypt is a bit like India and trying to keep as wide a range of friends as possible for strategic reasons and to try to keep at least some objectivity and influence in relations in the Middle East and regarding Israel in particular. I guess. considering it’s location at the crossroads and with a nuclear neighbour who is the sworn enemy of another potentially nuclear armed enemy too close for comfort and… Read more »