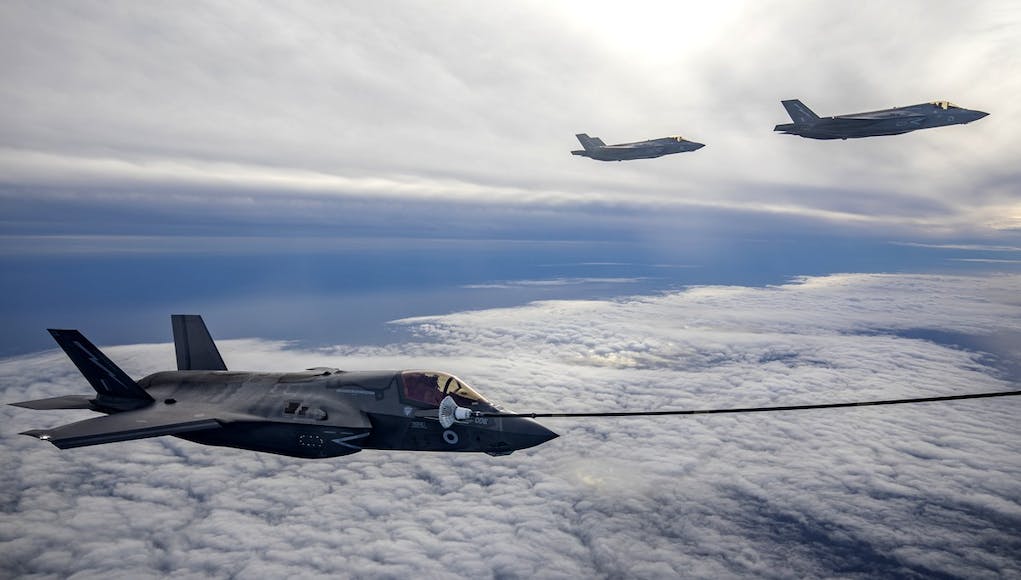 Over two dozen British aircraft have taken part in training with American bombers and fighter aircraft.

According to the RAF, over 26 various aircraft took part in Exercise POINT BLANK, which
demonstrates interoperability between the United States Air Force and Royal Air Force.

This article was submitted by John. John is a student at the University of South Carolina studying political science. He has also studied the Arab-Israeli conflict at the Hebrew University of Jerusalem. John currently hosts ‘The Osint Bunker‘ podcast, a popular bimonthly production focusing on global events, you can read more about the podcast on our dedicated page here.

The RAF claims the exercise “demonstrates the UK’s ability to operate in a highly contested fighting environment with near-peer adversaries across a range of aircraft capabilities”.

Exercise POINT BLANK is a quarterly joint exercise run by the United States Air Force, which contributes both tactical and fighter aircraft from RAF Lakenheath and the continental US.

“Bomber Task Force deployments are a great opportunity for us to further increase our interoperability with our U.S. allies. These Exercises allow us to give our pilots valuable training experience with near-peer capabilities, and strengthen our relationships across the NATO alliance.”

This comes as Russia builds up forces on its western border, particularly near eastern Ukraine. Russia has also ramped up its rhetoric in recent days, saying that the US was provoking conflict in the Black Sea.

Question to Russian envoy: are you planning to invade Ukraine?
– No, unless we are provoked to do so. Also there are U.S. ships in Black Sea provoking us pic.twitter.com/dPuVUrG2Zq

“[These exercises] demonstrate our continued combined commitment to the partnership and the defence of the Euro-Atlantic Area.”

We have covered Exercise POINT BLANK in the past. From earlier this year
‘British jets ‘grapple with 50 aircraft’ over North Sea‘.

That is actually quite a big UK deployment force % wise.

Great to see that sort of potent mass deployed with the Belarus / Poland + Russia / Ukraine nonsense running at the same time.

No it isn’t really.

Turning to the recent Russian incursions into western airspace with bombers. Putin is an absolute nutter and very much in the mold of other man men like Stalin in the past. It’s these kind of sociopathic men that are responsible for world wars. Let’s hope someone sensible in Russia bumps this guy off before he causes WW111. Shame we didn’t do this with Tsar Nicholas II and Kaiser Wilhem II before WW1 started and also with Adolf Hitler and Hideki Tojo in WW11 the world would have been a much better place without these war mongers. It’s always ordinary people… Read more »

Tsar Nicholas was on our side ! Not a war monger at all.

I think Putin is slowly beginning to understand how big a mistake he made in Ukraine. He tried to repeat his same strategy from Georgia grab a piece of territory and use it to destabilise the opposition to him in that state. It seemed to work at first in Georgia so he tried it in Ukraine. Now it’s clear it’s strengthend the anti russian faction in both states. Georgia and Ukraine have moved into the western camp and are now modernising there armed forces with western help. Ignore France and Germany they’re worthless in this as in everything else. The… Read more »

It does make you wonder what Germany and France will do…Usually get out their cheque book and pay them off like they did Turkey…Everyone knows the emperor has no clothes and the EU is a paper tiger…All mouth and no action…EU army, Navy and Airforce LOL…The Russian’s are quaking in their boots. Even NATO is a former shadow of its self and with the migrant crisis which is easily solved the EU makes a ham fist of that as well.

The goal of Macron at least is to replace NATO quote ‘brain dead’ unquote with the EU. Led of course by France. His problem is that in the Baltics and Poand they understand perfectly what reliance on EU/France would mean for them.

Turkey host 5 million refugees almost the world largest number ,that want to head to head to Europe. Just like Macron does to the UK they can wave goodbye to them as they head to the EU . The EU pays a tiny price for Turkey to host them . People are ungrateful of Turkish humanitarianism. Germany buys more Russian gas and France supports Russia in Libya while Turkey pushed Russia back in Libya and Ukraine .

Erdogan plays both sides and he sames to favour which sides suits him as and when he feels like it. When Russia entered Syria and Turkey shot down that Russian jet they quickly changed tactics and became Russia’s best friends and since have started working against them again. Yes Turkey holds many many refugees however they are partly to blame themselves for helping create many from Syria and the land they invaded and brought the refugees into Turkey itself to then use as a bargaining chip with the EU. Any country that uses refugees in exchange for money is just… Read more »

The US and EU did nothing for Ukraine when recently Russia amassed hundreds of thousands of troops around Ukraine borders! Only the UK was the loudest voice against it. Turkey supplies drones to Ukraine which attacked pro russian rebels angering Russia. Turkey is building for Ukraine 4 modern Corvettes too, which will transform it’s navy. Turkey is selling them more Baykar TB2 drones soon. Poland facing Russia purchased 25 TB2 too.

The UK and Turkey have an excellent relationship that works both ways and it was proven during pandemic when Turkey sent emergency supplies as aid to the UK NHS and later sold supplies when no one was sharing anything. Trade is growing. The defence relationship specially intelligence is high up too. Turkey never complains of the UK. Turkey gets from Putin only things others refuse to sell to them as interim like the S400 but allows Putin not to walk over them and challenges Putin often. They will produce S400 rival.TB2 drone may head to the UK soon

Moral relativism often comes out of the woodwork….I have a colleague that thinks Putin is the one hard done by….You couldn’t make it up. If you like Putin so much and you think the UK is the evil empire how about emigrating to Russia and enjoying that Utopia?

Lol…your funny….at what point did I say I liked putin. Advocating a strategy that is used by Putin is the problem DH. If YOU think assassinating leaders is the way to go you go and live in Russia and make it a better place. …you are advocating the actions and strategies of the evil sod.

andy a
Reply to  Andrew Thorne

There is another side, while I fully support Nato and UK, The russians at the end of the cold war were promised that NATO would not spread into the Ex soviet states thereby compromising their area of interest, looking back no one should have promised this as now these countries have their own free will. Looking at it from Putins direction promises have been broken.

My opinion is if they enter UK sovereign airspace we should shoot these planes down. Putin is a sociopath in the mold of Stalin and you need to show strength against bullies.

Only one leader did shoot down a Russian jet ever since the great 2 wars and that is Erdogan of Turkey in 2015. Russian planes stopped edging closer to the Turkish border after shooting down a Russian fighter jet and a helicopter in Syria. I recall how some other spinless NATO countries leaders called him irresponsible and some even siding with Putin just because they dislike Turkey. Erdogan understands how to deal with Putin, Xi type hence why Trump respected Erdogan more than Boris Marcron or Merkel

Shooting down those aircraft may not have had a military response but it cost Turkey billions in lost money in terms of exports/tourists. I would suggest that Putin knows how to deal with Erdogan was more to the mark.

So what do you suggest pleasing Putin and allow him to walk over NATO member Turkey ? It hurt tourist for a short term and they are back. Turkey already planned to increase tourist from other regions to compensate for Russian tourist. In terms of gas , Turkey host plenty of Russian gas heading to Europe and can use that against Putin . Turkey now has found lots of gas in the black sea and won’t be dependent on Russian gas like EU states and has increased supply from Azerbaijan too. What is the EU doing? Getting more Putin gas!

I think the Pakistan Air Force would disagree with that statement. F-16s harassed the Soviet and Afghanistan Air Force and shot a few down from both nations.

Hi James, As well as Pakistan (good post, Monty) – in 1970 the Israeli Air Force famously tangled with MiG-21s of the Soviet Air Force over the Suez Canal.
In a mass swirling dogfight between Phantoms, Mirages and MiGs – the Israelis claimed five Soviet fighters shot-down.
There is a good description on Wikipedia – see “Operation Rimon 20”.

At the end of WWII, Churchill, General Patton and others believed that was the time to take on Russia, as they knew Russian would become more dangerous, if left unchecked.

There was so much down time in the 90s when the wall came down ,then Putin came into power took a look at is USSR ,and decide time for Tanks Ships and Planes again has he like the old way .He has such a grip on is people any word against him there gone.The West made the mistake of sleeping while Russia build up hate to say it but the UK with some soft Labour government over the years was one of the worst for it .look at our manpower ,ship,plane,and tank numbers now .IT’s a case of oh dear… Read more »

Probably say the same about our relationship with China

Has any read a book called “Syphilis” it is about how many of the world leaders suffered from syphilis and how it affected their decision making as in its later stages it sends you mad. Chairman Mao was one of the most famous and how his concubines would be proud to catch Syphilis from him and use it as a badge of status. If we now move on 50 years and look at Mr Putin’s behaviour as well as Mr Xie’s (and Mr Trump) we can draw a few parallels, other people in history that were supposed to have suffered… Read more »

You may be onto something there, Bojo isn’t looking like his usual self! 🙂